The central region in Japan called the “Chubu region” contains 9 prefectures and the third largest region following Hokkaido and Tohoku.

Besides, inside of Chubu region is also devided with Tokai area, Hokuriku area, and Shinshu area.

Japan Winter Travel Guide; Hokuriku Region And Niigata Prefecture
Winter in Japan, do you want to what's like? In this guide, you can know about the details of the Hokuriku region (Toyama, Ishikawa, Fukui) and Niigata prefectures in the winter season.

Today, I am going to tell you what the winter like in Tokai area, (Aichi, Gifu, Mie, Shizuoka) and Nagano prefecture. 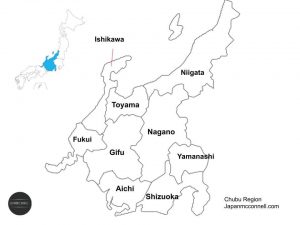 Check it out where to visit for beautiful winter places in Chubu region.

Although it is not so bad cold in the daytime, it is cold in the morning and night. Besides, it is still cold all day in the popular cold areas.

We all have to think a bit more creatively when getting dressed for the morning and night.

Layers are a must but don’t forget the insides of buildings, subways and railways are very warm.

Just buy a compact light down jacket that you can easily adjust warmth. You can also wear it under a heavy coat when going to cold areas.

I recommend bringing thermal innerwear, but it can be too hot depends on how much you are used to the cold weather.

Each person feels the heat and cold differently, so please use it as a guide.

The climate of Aichi Prefecture is different between the southern part of the Pacific Ocean side and the northern part centered on Nagoya.

The southern region is relatively warm in winter due to the effects of warm currents. It can snow, but it rarely accumulates.

Winters in the northern regions are colder compared with the southern parts. Such as Nagoya is geographically close to the Sea of ​​Japan, and the cold wind from the sea of Japan can path through over Wakasa Bay-Lake Biwa-Sekigahara. This allows the temperature colder and sometimes snow.

In winter, the northern part of the prefecture and the areas along the mountains are cold, so dress warmly.

It rarely snows heavily in Nagoya, but it causes traffic disaster if it gets heavy snow. Keep your eyes on the snowfall information every day. Better to stay inside of Nagoya city if it will be snow.

During seasons such as Typhoon and snow, the Japanese public transportation network will out of service easily more than you think.

Your itinerary may be messed up if you travel to Japan like in your country.

The temperature in Nagoya in January and February is the lowest in a year, and sometimes the daily lowest temperature falls below freezing.

However, unlike outfits in Hokkaido or Tohoku, you don’t have to worry about the perfect winter outfit.

Sneakers should be fine, and you can wear skirts wearing tights under neath.

Yet, be careful walking outside on the next day after snowing.

There are many underground malls in Nagoya city and the main transportation will be subways.

If you do not get used to the cold weather, thermal innerwear is helpful. But, you may feel too hot inside the building or during the daytime.

Gifu prefecture that countrysides have more attractions rather than city sides, you need to pack winter essentials to protect from cold weather.

The most popular winter attractions in Gifu prefecture is you know, visiting Shirakawa go, Onsen experience in Gero, strolling the historic town in Takayama city, and those towns in mountains and known as cold and snowy area. So pack heavy-duty winter outfits when traveling mountains are in Gifu.

Such as Gifu city, Ogaki city, Seki city is almost the same temperatures as Nagoya.

However, the real feel temperature is colder than the actual because of the cold wind from the mountains and the sea of Japan.

Also, it gets snow compared with Nagoya, so better wear winter boots.

What To Wear In The Cityside In Gifu

Takayama, Gero, and Shirakawa have almost the same weather which is very cold and snowy.

Not like packing for city sides, you need to pack heavy winter coats, lightweight down jacket which wears under the coat, thermal innerwear, winter boots, winter accessories, and hand warmers.

Mie prefecture is located south of the Chubu region and has an elongated shape from north to south facing the Pacific Ocean, so the temperatures are different from the northern area and southern area.

The temperature in the Northern part of the prefecture is almost the same as Nagoya and Gifu. On the other hand, the southern part is warmer and lots of rain.

Mie Prefecture’s main attractions are concentrated in the Ise & Shima area, and Toba area, and you don’t need to pack sturdy winter clothes to travel in these areas. Even so, it is often windy from the sea, so it is advisable to bring a warm jacket.

Also, those areas have strong sunlight, bring sun protection even in the winter.

The northern and central areas are colder than Ise • Shima and Toba area, especially when visiting Mt Gozaisho, pack a heavy winter jacket.

We can’t leave behind Mt Fuji that you can see it from everywhere in the prefecture.

Winter is relatively mild cold on the coast, wearing a down jacket on a knit sweater or sweatshirts should be OK, however, it is often windy so better to pack winter accessories such as a pair of gloves, scarves.

Nagano is a beautiful prefecture with great nature located in the almost middle of the main island which bordered by Gunma, Saitama, Niigata, Toyama, Yamanashi, Shizuoka, Gifu, and Aichi prefectures.

Nagano Prefecture is not only surrounded by 3,000-meter mountains but is also known for its high altitude throughout the prefecture.

As I said, Nagano’s winters are colder than in other prefectures, make sure to pack winter essentials referred from traveling for Hokkaido.
Even if it’s sunny, the temperature is low, watch out for icy ground especially in the shade.