If you will visit Japan for the first time, probably you may travel to the Kinki region.

Kyoto, which is the most popular traveling spot in Japan and one of the metropolitan Osaka is located in the region, and Kansai International airport aka KIX is the top 3 busiest airports in Japan as well as Haneda and Narita.

Yet, Japan is long and narrow from north to south and has many mountains. Besides, surrounded by the cold Sea of ​​Japan and the warm Pacific Ocean,
It is generally difficult to explain the weather in one word.

For example, there are high mountains in the Kinki region, and some parts of the region are affected by the sea of Japan climate.

So I mean, you may need an extra winter essential depends on the areas you are visiting even in the Kinki region.

Let’s find out winter essentials for traveling to the Kinki region by prefectures. 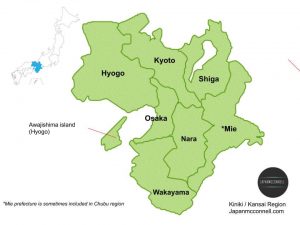 Although it is not so bad cold in the daytime, it is cold in the morning and night. Besides, it is still cold all day in the popular cold areas.

We all have to think a bit more creatively when getting dressed for the morning and night.

Layers are a must but don’t forget the insides of buildings, subways and railways are very warm.

Just buy a compact light down jacket that you can easily adjust warmth. You can also wear it under a heavy coat when going to cold areas.

I recommend bringing thermal innerwear, but it can be too hot depends on how much you are used to the cold weather.

Each person feels the heat and cold differently, so please use it as a guide.

According to the 8 region division, Mie prefecture is listed in the “Kinki region”.

Shiga Prefecture has Lake Biwa which is the largest lake in Japan, in the center of the prefecture. There are several attraction spots around Lake Biwa, such as Hikone Castle, Nagaoka city, and Hieizan Enryakuji Temple, the head temple of the Tendai sect.

Shiga prefecture has a slightly lower winter average temperature than other prefectures in the Kinki region.

Indeed, there are some areas that get snow, prepare enough warm clothes especially if you are visiting Lake Biwa, temples, and castles!

Nara Prefecture was the capital of the 6th and 8th centuries and has many important shrines and temples.

In fact, Nara Prefecture has most World Heritage Sites in Japan. Horyuji Temple is the oldest existing wooden structure in Japan built 1400 years ago. Nara’s cultural assets are scattered around Nara Station, such as Todaiji Temple, Kasuga Taisha Shrine, Kofukuji Temple, Yakushiji Temple, and Toshodaiji Temple. The Sacred Sites and Pilgrimage Routes in the Kii Mountain Range are World Heritage Sites, including the famous Kumano Kodo.

Nara prefecture is geographically a basin as well as Kyoto, so it is cold in winter and hot in summer.

Not so many windy days in Nara, but it gets cold in January and February.

Kyoto, home to temples and shrines is a basin surrounded by mountains, thus, it gets cold in winter and hot in summer. A region with little snow.

In the daytime in December, a light winter jacket is OK, but, it gets very cold from the late afternoon to the night, so a heavy winter coat is essential.

IIn January and February, the temperature gets lower and sometimes goes below freezing. Therefore, heavy winter coats and thermal inner wears are essential.

There are many steeps and stone steps in Kyoto, bring winter boots with anti-slip.

Don’t forget to pack winter accessories such as stoles, gloves, and knit caps.

I always recommend bringing a light weigh-down jacket which doesn’t bother in a suitcase.

These cities are listed in “heavy snow area” so bring winter essentials to protect from low temperature and snow.

Japan has many basins geographically and has a specific climate, which is that the daily and annual temperature range is larger due to the difference in “specific heat” between the continent and the ocean, and the air is relatively dry and less rain.

Mountains surround the basin and block the ocean breeze, so the air is not well-circulated. Thus it is hot in summer and cold in winter.

In summer, the heat is trapped in the basin, and often the foehn phenomenon causes a dry, hot wind.

Osaka is not as cold as Kyoto, but the average temperature drops to single digits. Be aware of the real-feel temperature when you visit seaside areas such as Osaka Kaiyukan and Universal studio Japan.

Osaka city is a metropolitan as you know and lots of attractions which is mostly inside activities. Also, the main transportation will be Osaka Metro and railways so better bring a light-weight jacket.

You can wear thermal inner wear but you may be feel too hot inside building.

I currently live in the Northern Eastside in the US, I don’t feel it is not so cold in Osaka to me as seeing the table above, but how about you???

Besides, you will use the Osaka metro and railways to hop around in Osaka city so better bring a winter jacket easy to put on and off.

Osaka City Highlights; Osaka Travel Information And Tips
Here is the complete guide for the first travel to Osaka, Japan, to tell you how to get around smartly, efficiently, smoothly.

Wakayama is a prefecture located on the west side of the Kii Peninsula, and more than 80% of the total area is mountainous. The World Heritage Site registered as “Sacred Sites and Pilgrimage Routes in the Kii Mountain Range” spans Wakayama, Nara, and Mie prefectures.

Nanki Shirahama, a beautiful white sandy beach, and Shionomisaki, located at the tip of the Kii Peninsula are perfect to visit if you don’t like cold wether.

“Nanki Shirahama” is famous for its white sand beaches, and there is “the adventure world” that contains a zoo and an amusement park, and hot springs.It is a sightseeing spot that you can enjoy with your friends and family.

The lowest temperature is around 5 degrees Celsius, which is not so cold (I think,) but it is better to go out dressed warm enough due to the coast area.

It rarely snow in the area, so you don’t need heavy winter boots.

From November to March on Mt Koya, it will be as cold as cold areas such as Hokkaido, Tohoku.
Note that dress heavy-duty winter clothes, winter boots, and winter accessories for Mt Koya.

Kobe is coming up on your mind first as the staple sightseeing spot in Hyogo prefecture.

From ancient times, it has been developing as a trading hub of maritime transportation leading to Kyoto and Osaka.

There are many attractive tourist spots only in cities with a rich history.
Nankinmachi, one of Japan’s three major Chinatowns, is also popular along with Chinatowns in Nagasaki and Yokohama.

Outside of Kobe city, there are more attraction spots such as Himeji Castle, which has a very beautiful appearance called “Shirasagi Castle.” There are also hot spring towns such as Arima Onsen and Kinosaki Onsen. Hyogo Prefecture has a great variety and is full of highlights.

The average monthly temperature does not exceed 10 degrees Celsius, so choose the best warm outfit for you. The lowest temperature is often below freezing, dress warmly in the morning and the late evening.

Kobe’s fashion style is called “Kobe fashion” in Japan, and it is classic yet stylish and sophisticated.

It’s fun to dress up a little and go sightseeing in Kobe!

Where To Visit For Beautiful Places In Kinki Region

japanmcconnell.com
Winter In Japan; Beautiful Places Worth To Visit
Many visitors want to see Japan's beautiful winter contrast; Snow & Historical Buildings. Visiting in the winter, you can experience winter tradition not only these contrasts but also natures and even flowers that you can see in winter. Depends on where you travel, can be very cold or very mild. In this post, you can see winter destinations in each region in Japan. 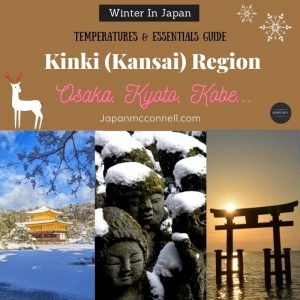 japanmcconnell.com
Japan Highlights By Major 8 Regions
Discover what to do, what to eat, what to buy, and best Onsen list in each regon in Japan. Hokkaido, Tohoku, Kanto, Chubu (Hokuriku, Tokai, Shishu), Kinki (Kansai), Chugoku, Shikoku, Kyushu and Okinawa Islands!

Heatstroke In Japan; How To Prevent Heat Stroke During Traveling In Japan’s Summer Season