I am talking about Tetsubin as you know maybe actually “a Japanese cast iron Kyusu teapot” in this post. So, here, I am going to talk about a “Tetsubin” exactly what it is.

Today, stainless steel kettles or even electric kettles are available at reasonable prices and took over a nostalgic iron kettle role.

If you are already interested in the Japanese cast-iron kettle, take a peek at the history and benefits it?

Japanese Cast Iron Teapot; How To Use And Care
Green tea connoisseur? Looking for something Zen-life? "Tetsu-Kyusu"-the Japanese cast iron teapot is ideal for upgrade your tea life and kitchen or office decor. There is often confusion between Tetsubin and Tetsu Kyusu and you can't use Tetsu-Kyusu on the stovetop. Read this guide that tells you about how to use, clean, store, and also how to deal with iron rust.

The Charm Of Ironware

Ironware with a unique weight and calm atmosphere. Not to mention the ability as a vessel that makes the best use of the characteristics of iron.

As an item that makes you feel nostalgic and aesthetic, Japanese ironware is attracting attention both in Japan and overseas.

Especially, Nanbu Tekki is very popular for those who like cooking with ironware and enjoy green tea life. Among several ironwares of Nanbu Tekki, a cast-iron kettle called “Tetsubin” is most representative.

So, now, I will introduce the authentic Tetsubin-characteristics and how to care for them. 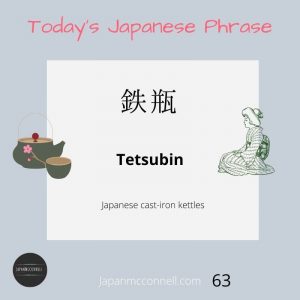 A cast-iron kettle in Japan is called “Tetsubin”-Tetsu means iron.

Due to the trend of Japanese aestheticism, Tesubin has been popular and you can find easily it through several markets. However, as I mention here, unfortunately, there is confusion between “Tetsubin” and “Tesu-Kyusu teapot.”

Tetsubin is a tool for “boiling water” not brewing tea leaves.

Therefore, in general, many of them are larger than the Kyusu teapot.
Also, it can be used on the stovetop that Tetsu-Kyusu teapot is not enabled.

In addition, you can ingest iron from hot water boiled in Tetsubin. There is the reason why it has been loved from old times in Japan is that the water becomes mellow and round, and drinks such as tea and coffee can be brewed deliciously.

A Brief History Of Tetsubin And Nanbu Tekki

The history of iron kettles is said since 14th to 15th centuries, about 600 years ago, and also
the representative Japanese ironware is called “Nanbu Tekki” was around 1750 in the 18th century.

Ironware certified as Nanbu Tekki must be manufactured in Morioka and Oshu cities in Iwate prefecture.

It has been well-known for its high-quality and unique designs, so speaking of cast-iron kettles, this is the first thing that comes to mind.

It’s nice bragging about Nanbu tekki in your kitchen cabinet. It is selected in Japan’s national “traditional crafts” and there are many kinds of kitchen tools not only Tetsu-Kyusu teapot. Besides, Tetsubin, a cast-iron kettle is also popular as well.

A typical pattern in the Nanbu tekki iron kettle has hobnail designs called “arare” on the surface. The size of protrusions is smaller as going to the top so that the patterns are beautifully lined up in the spherical iron kettle. Besides, the shape, depth, and spacing of hail vary from craftsman to craftsman.

The origin of Nanbu Tekki is in the middle of the 17th century. It is said that the feudal lord of Morioka City invited a casting master craftsman from Kyoto to make a kettle for the tea ceremony. Since the area around Morioka was blessed with high-quality iron resources, castiron produce locally became one of the main manufacturing.

For a long time, there has been traditionally only black color available, however, you can see a variety of colors, designs, and shapes around the United States, Europe, and Asian countries.

The boiled water boiled in Tetsubin is mellow and round and becomes so different from the one just boiled tap water!

The Japanese Way To Wellness; Drinking "Sayu" Plain Hot Water
Japanese wellness rituals and practices are often unique and attractive, almost always they are easy and reasonable. As one of J wellness trends, drinking plain hot (warm) water boiled Tetsubin (Japanese cast-iron kettle) is for you. Of course, it brings you several health benefits and relaxation. Here is the ultimate guide on drinking hot water; how to boil water, when is the best time to drink, and ideas to add flavor.

This may be one of the reasons that the Japanese are addicted to Tetsubin because they are unable to change their life which is not using mellow and delicious boiled water by Tetsubin.

Tetsubin can dramatically change the character of even tap water. Moreover, the quality of green tea and other tea changes dramatically too which making your tea life even more enjoyable.

I am not sure whether the issue in your country, but the Japanese are focus on intaking iron from boiled water dissolved from Tetsubin. Generally, Japanese natural water is soft water that means less mineral contains, and most Japanese women tend to be in lack iron.

It is also recommended to make miso soup with boiling water.

How To Take Care Of Tetsubin

If you are interested but find it is picky to maintain the ironware, no worries.

Rather, it is not required to clean with dish soap. There are Japanese Tetsubin that apply rust-proof and will cause bringing rust if you scrub it with detergent.

Interestingly, it has long been said that the inside of an iron kettle should not be washed- it can make delicious mellow and round hot water from the whitish inside…but you may need to explain to the mother-in-law about it.

Avoid leaving boiling water in Tetsubin long. Transfer the water to a heat-retaining bottle if needed. After using, leave the lid oven and let it dry. It is even better to heat it to remove moisture on the stovetop.

Besides, as the point of Sayu-life, it is said that the original health benefits deteriorate when boiled water is repeatedly boiled. So, keeping boiled water in a heat-retaining bottle has make-sense.

Remove the lid of Tetsubin and rinse well the inside with running water. At this time, do not scrub with a sponge or scrubbing brush.

Then, fill the kettle up 80% with water and bring it to a boil. Repeat this process 2-3 times before using. Also, when boiling water in an iron kettle, shift the lid a little. If the lid is completely closed, hot water may spill out.

After Use Each Time

Ironware hates moisture so does Japanese Tetsubnin. The inside of Japanese Tetsubin is often not coated with a glaze, not like Tetsu-Kyusu, so leaving it moist will cause rust.

After using it each time, drain all the remaining water and let the lid out and dry the inside with residual heat.

If it still does not dry completely, heat the body for 15 to 30 seconds without the lid on the stove.

How To Get Along With Rust

Also, Tetsubin gets often rusts while using in a lifetime, but don’t worry. No problem as long as the boiling water does not turn red. If you are still concerned, boil water and tea leaves such as green tea or black tea which contains rich tannin. 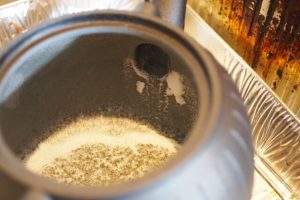 You can see red rust after a week from the first use, and use it further, white scale will form. This is not harmful rust as I said before, so you don’t have to remove it.

If you forget to throw away boiled water or store Tetsubin in an unwell-vented place, and it gets rusty, you can remove the rust with sencha tea leaves.

Fill the kettle up 80% with water and throw a bag of (used) Sencha tea leaves in it. Simmer for about 20 minutes until the water turns black. Leave the tea leaves, add water up to the top, and leave the kettle for half a day.

A Japanese cast-iron kettle can bring a unique and nostalgic atmosphere to your kitchen, attracting both the Japanese and overseas.
The hot water boiled in an iron kettle is mellow round and so nice. Actually, I also started boiling water with an iron kettle. My tea life has been changed because of my Tetsubin.

If you want to Tetsubin life, please use it regularly under proper maintenance rather than stock it in your cabinet!

The Japanese Calligraphy And Kakizome; Things You Want To Know