As well as the celebration of the coming year, preparation steps for it are essential in each family.

Japanese people try to clean up their must-do issues, goals that they wished at the beginning of the year, their messy problems, by the end of the year to not bring to the coming year.

Bounen-kai”(忘年会) is the unique tradition that is the party for getting over with problems by drinking in Izakaya restaurants with their friends, colleagues.

It is a little different example that I am going to talk about,

the interesting things to know about Japanese New Year’s traditions are very mixed up with Shintoism and Buddhism.

The mean of “Sho gatsu” for Japanese people

The period of celebrating New Year is called “Shogatsu” (正月), “*Oshogatsu” (お正月) in Japanese, which originally meant “January” a long time ago.

So the whole month in January was as the period to celebrate the new year, but nowadays, it had changed to usually from New Year’s day through the 7th (or 15th, 20th, it varies depends on regions).

During this time, most business is closed.

*Generally speaking of Japanese words, adding “O” or “Go” in a head of a word means politeness or respect.

I know it is not in the springtime but in this way it is easy for you to imagine about “Oosouji”(大掃除).

It has been believed that the god the New year brings each family happiness and health for the year so that people get ready and show their hospitality for welcoming the god to their house.

To welcome the god, Japanese people clean all through the house before New Year’s Day.

Getting rid out of piled up dust from the whole house, especially the altar is very important to get better luck.

Except for housewives who don’t have work, people have to “Oosouji”, the spring (but winter) cleaning, twice, which are classrooms in schools or offices and own houses.

In school, all classrooms are cleaned up by students and teachers before the winter break, and also in offices, workers clean up their desks before taking a new year’s holiday. 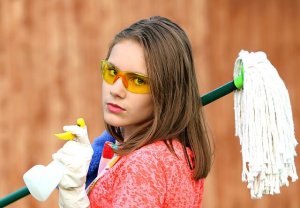 It is not so fun to clean windows with cold water in the chilly weather, but it is one of tradition.

The most decorations concept is from Shintoism, which is the oldest religion that native people have been believed in.

“Shinto” (神道) is the oldest particular native religion (indigenous religion) in Japanese culture. Japanese people have believed that everything whether organic matter or inorganic matter, has the spirit of a deity, (Shinkon). 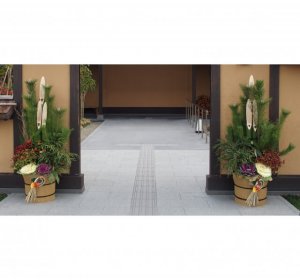 If you play “Mario Cart”, you might be familiar with “Kadomatsu” already.

A “Kadomatsu”(門松) is one of the traditional decorations to welcome a new year.

The pine tree has been believed that the god is located, additionally, the bamboo is on the side because of a lucky charm for Japanese people.

It is usually placed in front of houses to serve the purpose of guide ancestral spirits or the god of the new year to the house.

They are placed after the Christmas celebrations and left until January 7-15. 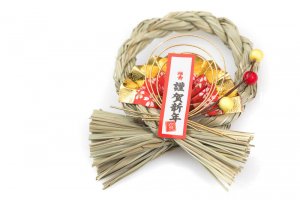 “Shimenawa”(しめ縄) rope made of rice straw, is a more common New year’s decoration for the people compared with “Kadomatsu” and is hang up the front door, the altar, and cars.

Shimenawa rope has the meaning of indicating a sacred place for the god, serves as a barrier to the realm of God from the world, and also keeps out unsacred things from the house. 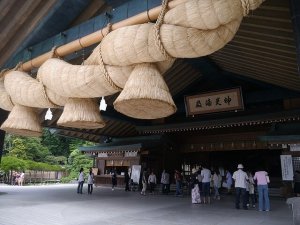 This is the reason that you can often see “Shimenawa” rope at Shrines. 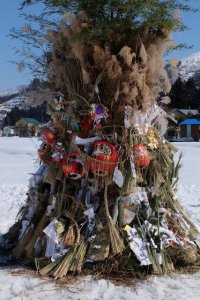 Interestingly, there is the certain day to throw the rope away and the people really care about it.

It called “Don Do Yaki”(どんど焼き),

Usually the local shrine has the event to collect and burn ropes.

The meaning of burning ropes is said the god goes home with smoke.

Even some people have no choice to throw Shimenawa rope away by themselves, they warp it up carefully and purify with sake or salt. 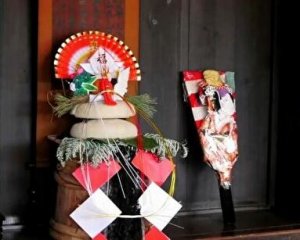 “Kagami mochi”(鏡餅) can be the most essential decoration for welcoming the New Year because it is the place where the god is settled down during the period of “Shogatsu”.

In case you don’t know about “mochi”, it is called sticky rice cake in the US, made of rice. As it is called “Sticky”, Mochi is very sticky. You may know as mochi as Japanese sweets but when Japanese people say “mochi”, generally refer to non-sweet mochi. They usually eat regular mochi at breakfast, simply grill and dip in soy sauce( sometimes added sugar).

Generally, the main “Kagami mochi” is decorated in the alcove and others are in a quiet place in each room.

As same as the Shimenawa rope, “Kagami mochi” will be eaten on a special day as the special dish.

The special day is generally the 11th of January and called “Kagami Biraki” (鏡開き). 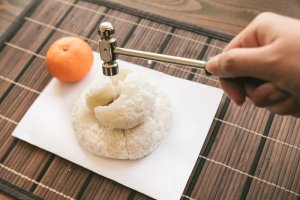 “Kagami Biraki” is the special day to eat “Kagami mochi” as the event of Shogatsu.

You are not allowed to break and eat it before January 11th because it is believed the god of New Year is still settled in “Kagami mochi”.

“Kagami mochi” is typically well-dried sticky rice ball so it is very firm.

You may want to use a knife, but it is a TABOO!!

The event originally started from Samurai family so a knife meant “Cutting own belly” (Seppuku) for Samurai, thus using a hammer is the right way to break “Kagami mochi”.

Nowadays, modern Kagami mochi is packed in plastic mold and very easy to open it up.

There are several ways to eat Kagami mochi, here are traditional dishes for how to eat “Kagami mochi”. 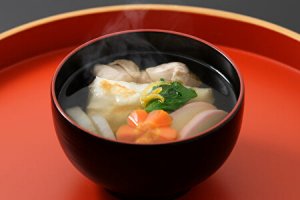 “Ozoni” is the bowl of soup dish especially for eating mochi.

The ingredients and soup broth differ from region to region, usually local vegetables and foods in the soup too.

My mother is from Nagoya, her Ozoni is similar to Kanto (Eastern Japan, Tokyo area) style, which is clear soy sauce based soup. (like one in the picture above) 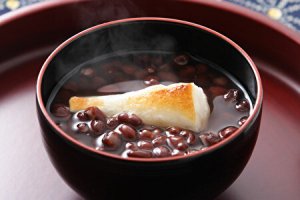 “Zenzai” “Oshiruko” is Japanese traditional sweets with mochi. The soup is made from water, sugar, salt, and Azuki beans. 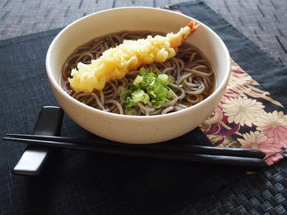 There is a long-time custom that Soba noodles are eaten on New Year’s Eve in the wish for a long life because noodles are thin and long.

Also, it is believed leave bad lucks in the year behind because noodles are easily cut. 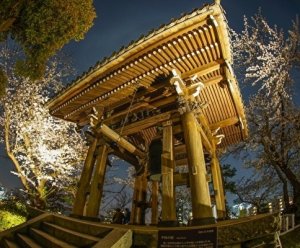 As Japanese Buddhism, people are supposed to stay up all night on new year’s eve for welcoming New Year (the god of the New year).

In order to purify themselves to be ready for, they go to the temple and strike the bell.

It is called “Joya no Kane” (除夜の鐘), and today, Japanese people just enjoy striking the bell as the annual event.

Some places serve “Amazake”, kind of hot sweet sake, it makes you cozy and warm. 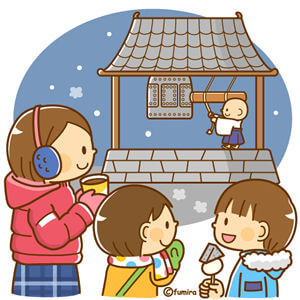 I remember that I was excited about going to the local temple with my cousins because I (most kids in Japan) was allowed to be up only New Year’s eve to stay up that late and went out.

It was also a special event for us to stop by the local small ramen noodle shop after striking the bell.

The Viewing Of The Sunrise 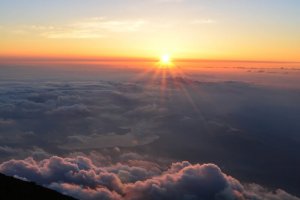 In a long Japanese history, the sunrise on the new year’s day has been believed when the god of year, Toshigami(年神) arrives in our living world.

Toshigami is God for harvest and piece of the year.

Therefore, the viewing of the first sunrise (Hatsu Hinode-初日の出) is very holy for Japanese people.

Especially, the sunrise greeted at the summit of high-mountains is called “Goraiko”(ご来光). 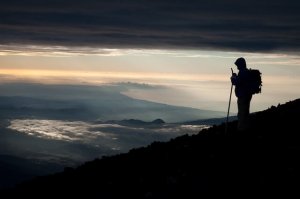 Many people climb Mt Fuji to watch the first sunrise every year.

Do you want to challenge it?! 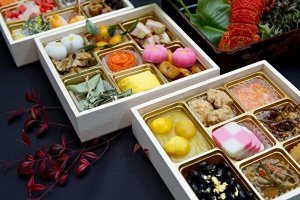 “Osechi”(おせち) is a specialty dish for New Year’s.

The items of food in “O ju”, which is the beautiful traditional lunch box for “Osechi”, hold meanings of family prosperity, happiness, and health, usually, the wives spend few days to cook all items.

So the variety of Osechi not only traditional items are sold recently filled with more meat dishes, shrimps, spiny lobsters.

“Otoshidama”(お年玉) is a Japanese traditional custom that adults (usually parents, grandparents, and uncles and aunts) give money to the children in their family on New Year’s Day.

The money is handed out in the special tiny paper bag called “pochi-bukuro”, and doesn’t have to be big bills but must higher for older kids than younger kids.

“Pochi-bukuro” is very cute, and you can buy those at 100 yen shops in Japan.

The first greeting on the New Year’s day is important.

As the traditional rule, family members greet the master of the family at first. 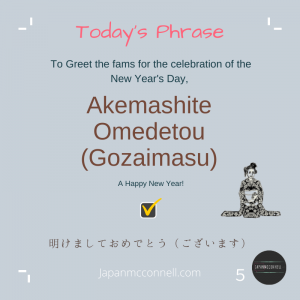 However, it is kind of “Old-fashion” among modern family today. 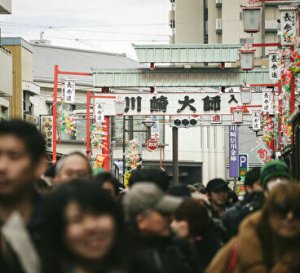 After greeting on New Year’s Day, Japanese people visit local temples or shrines to pray for the appreciation of the last year and good luck of the new year.

It is called “Hatsumode” (初詣), literally means “the first Shrine( or temple) visit”.

Every shrine and temple has its own deities and its own focus of purpose so some people hop shrines and temple for each purpose.

Do you want to learn the shrine visiting manners?

The Informative Guide To Japan Shrine Manners & Omikuji Things To Do
Visiting Japan? The top attraction of things to do in Japan is "visiting Shrines and Temples". Shrines are the place where God lives, we are happy for you to pay respects following official steps. This site tells you the most common manners for the shrine visit and also guides about after-attraction such as drawing Omikuji. 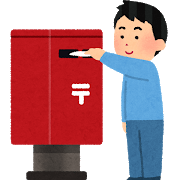 Like sending Christmas cards to fams in the US,

It has to be written on the special postcard and it is polite to be received at least by the 3rd of January.

The special postcard sold a few months before the New Year’s Day by Japan Post Holdings, and it will be sent on New Year’s day if you post the card in the mailbox by the due date.

As getting e-mail, text, social networks popular, the number of cards has been decreased but it is still one of the traditions of “Oshogatsu”. 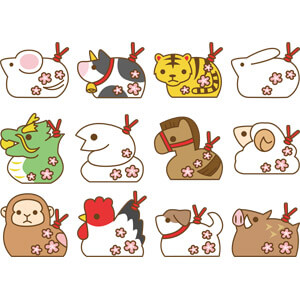 In Japan from ancient years, “Chinese zodiac” has been used for the symbol of the year, and people use the zodiac of the year for the new year’s card.

Japanese New Year’s tradition is mainly based on the Shintoism custom that has been representing Japan. However, in the long religious history, Japanese people also follow Buddhism customs.

The main meaning of New Year’s Day in Japan is welcoming the god of the new year and wishing good luck, happiness, prosperity, and health for the family.

I am hoping I could inspire you to know Japanse tradition and enjoy the meaning when you visit Japan during “Osyogatsu”. 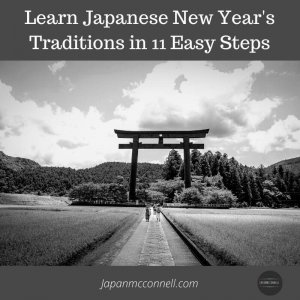