is one of the attractive wards in Tokyo, as a place where you can enjoy the lively nightlife.

Tourists enjoy the vivid neon-spangled skyscrapers of Shinjuku, Kabuki-Cyo, and then wander into the mysteries deep spots.

has been the popular district among patrons for long. Recently, it became one of the new trends for foreign tourists. (Also the Japanese).

Business owners are very happy for getting well-known once they thought about the decline period in the past, however, it is also the fact that some ill-mannered tourists bother them and patrons.

To protect patrons and beloved nostalgic atmosphere, some places have to reject new visitors.

You might think it is the mean rule, but the “Golden Gai” has been loved because of its atmosphere for long.

You are lucky to read this.

I will tell you prior knowledge about how to enjoy the district smartly.

The History Of Shinjuku Golden Gai 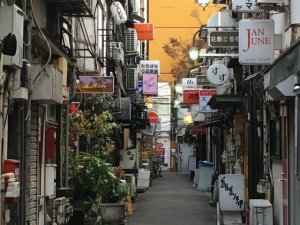 The Origin Of The Golden Gai

If you follow back history, it goes to just after the end of the war in 1945.

By the army, The black market that originally located on the east side of Shinjuku Station was forced to relocate to where the current Golden Gai is located.

The dark and deep district had developed prosperity as illegal prostitution, called “Blue Line district” until the anti-prostitution law was fully enforced in 1958.

After 1970, a new culture changed the atmosphere of the Golden Gai, where a wide variety of cultural people such as writers, poets, actors, journalists spent the time drinking and discuss the literary and political theory throughout the night.

Its mysterious and abnormal atmosphere somehow kept off ordinary “healthy” people. One of the patrons said, “Golden Gai is a special place in Shinjuku, and it ’s not a place where ordinary people come to drink.”

During the1980s, the Japanese economy was drastically growing, and the price of real estate of the Shinjuku area and it tortured bar owners a lot.

They formed the union to unite and oppose land development and redevelopment.

In the 1990s, the rise of the real estimated price stopped due to the collapse of the bubble economy, but many bars that had succumbed to the price increase were left and it became like a ghost town.

For some time the “Golden Guy” area has declined, but new young owners have taken over the historic bar or many new owners have opened new bars. They made a more modern stylish atmosphere to get closer ordinary people such as young people.

Especially, for young people, the nostalgic and unique narrow alleys were so attractive, the “Golden Gai” gradually had been revived.

Besides, it has been a new sightseeing spot for international visitors.

Due to the bubble burst in the 1980s, the “Golden Gai” district fell into a decline, however, it has been revived with the nostalgic and attractive atmosphere today.

Bar owners in the golden Gai highly appreciate the resurgence of this popular spot, but in fact, they and also local patrons are worried about “tourism pollution“.

First of all, you need to know the Golden Gai is not the night town where you can behave like below even it is a different concept of your culture.

As the number of visitors with different cultures increased, these troubles have been obvious and some bars that had been used for a long time had to opt for visitor restrictions.

Due to the long history of the Golden Gai, there are undocumented rules among patrons. If you know the prior knowledge, you can avoid bothering locals. 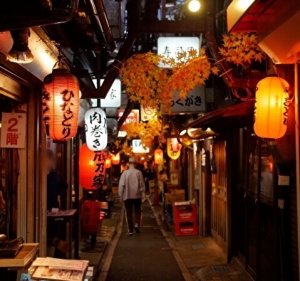 Do Not Stay Too Long

Most of the “Golden Gai” bars are very small spaces, so it’s a smart and kind way to not stay too long in one place after enjoying enough time. Therefore, new customers can enjoy themselves.

The district of the Golden Gai has more than 280 bars and restaurants across seven alleys. Enjoy bar hopping one to next and meet new friends. This is a local style.

“Bar-hopping” in Japanese is “Hashigo zake”.

A Small Group Is Better

Again, most places are very small spaces. A small group (up to 3 people) is a good way to share space with other customers.

Be aware that some bars reject large groups.

You don’t have to pay a “tip” in Japan, but you will generally be charged a “table charge”, especially in places like bars, pubs, and Izakayas where serves alcoholic drinks.

•Otoshi...If you are served a small dish at first without ordering it is not a free dish. It is a substitute for offering table charge

If you don’t want to be discouraged, make sure bars offer a table charge or “Otoshi” before drinking. 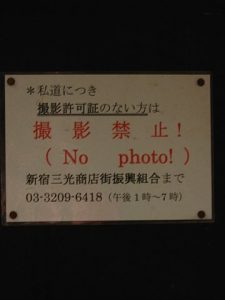 Do not take pictures of private properties.

As time goes by, all kinds of people, men, and women, all ages, have been gathered into small bars on narrow alleys where people gather at night and enjoy the nightlife.

In addition, Gloden Gai is facing countermeasures as an increase in new visitors, and some bar owners have an international friendly environment to avoid troubles caused by cultural differences such as placing English menus, table charge signs in English.

You will see why the nostalgic deep districts have loved for long once you step in.

Do not forget there is a different culture in each country, and need to respect it especially loved places like the “Golden Gai” to keep comfortable relationships between tourists and locals. 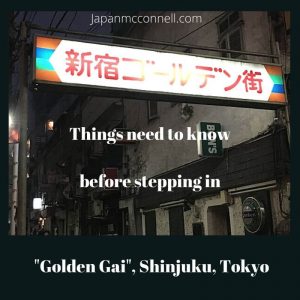 All about "Izakaya" in Japan [Vol.1]; The Basic Type Of Izakayas And Little Trivia
Going to Japan? love drinking? Izakayas are one of the unordinary experiences during your Japan trip. There are many types and concepts of Izakayas, you must know them to get more of your self-attention for the unique experience. Read this and get information for Kanpai beer in Japan!

Things I wonder when I go back to my country, Japan