The native guide; All about unique Japan Things I wonder when I go back to my country, Japan | Japanmcconnell
Home
Culture, Etiquette
Sponsored Link

I had lived in Japan until 2014, and luckily I have a chance to go back to Japan every year.

As I have learned about other cultures and met several people in several countries, I start feeling strange (or impressed) in some situations every time I go back to Japan.

Every one Wears Masks 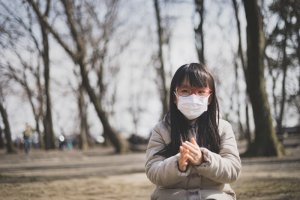 The sight of everyone wearing masks on streets, trains, and stores, scares me a lot. I feel very weird but also it realizes me being back to Japan.

When I was a kid, it was not like these days.

In Japanese society, it has been promoted to wear a mask to prevent a cold and flu and also to not spread germs out a crowded.

The mask culture exploded in Japan, 2009, due to “the new type of influenza” A virus (H1N1/09) had been pandemic throughout the world.

Since then, companies have produced a wide range of masks from high-performance to inexpensive disposal masks on the market, moreover, during the hay fever season, many people don’t care what others think about their wearing masks all the time.

You might be amazing varieties of masks in the drugstore, there are masks for men, for women, for children, for the small face, the mask with aroma, the colored mask, and new types of masks is coming every year. 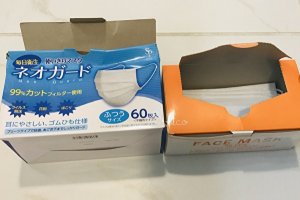 My disposal mask stocks at home

Surprisingly, the purpose of wearing masks have been changing in recent years.

Some women wear masks because they are lazy to put makeup on their faces, and some people wear them because they don’t want to talk to anyone.

Moreover, some young people can’t take their masks off in front of people with the reason of social anxiety.

I watched TV the other day about the young guy who has started covering his face with a mask for 15 years! When he was in elementary school, friends of him began to be bad-mouthing, and it made him building a wall around himself. 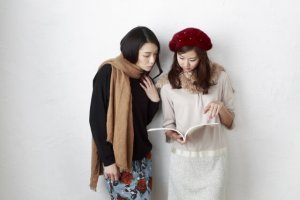 What do you think about the Japanese girl’s fashions? (Not talking about Cosplay).

Compared with fashion in American, European, and other Asian countries, sometimes Japanese fashion looks strange for me.

Or Wearing leggings under short-pants, skirts, and wearing camisoles on the T-shirts.

When I lived in Japan, I didn’t think it was strange.

I wore the latest trend that everyone did like everyone was.

This is the Japanese trait.

So you will see girls (even boys) look similar in Japan.

Although there are several types of Japanese fashions,

Japanese girls are socially demanded to be “mature, neat, quiet and clean”, so most of them tend to wear 1.cute and 2.Sophisticated style not to be stand out.

Also, they always want to be someone’s so that Japanese fashions tend to be like

As I told here, Japanese girls tend to hide their complex (fatty parts of the body) and also avoid exposing cleavages as Japanese culture.

I am talking about stereotypes of Japanese girls, and not everyone is like that.

Anyway, I feel Japanese fashions are a little different, so I don’t wear “Japanese-like” much in the US.

Why? Because I don’t want to be stand out! (haha) 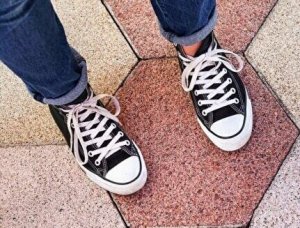 I don’t like Japanese girls often stand and take selfies with pigeon-toed ON PURPOSE.

(It is very weird everyone does it on their SNS)

In Japan, pigeon-toed had recognized as “feminine” for a long time.

It is also the etiquette to walk pigeon-toed when you wear Kimono.

Walking with pigeon-toed originally started from Geisha girls to produce of femininity, and it might have remained in this era.

In fact, you often see cute girls who stand with pigeon-toed in Manga and Anime.

Therefore, the Japanese recognize IT as CUTE behavior.

But I just feel it too much when I see girls do pigeon-toed ON PURPOSE.

I am very proud of the Japanese quality of services, it is wonderful.

In Japan, it is said that “The guest and customer are always right” so that their status should be higher than themselves in business situations.

Also, people who work in the hospitality industry pleasantly give them high-quality services to make guests and customers happy.

The Japanese use modesty as a virtue and apologize immediately for even a small thing.

When I waited in the line for payment, it was not a long time, but they apologize, “I am sorry for waiting for long”.

This conversation below is often unfolded everywhere in Japan.

I often feel too mush service, too much apology, but I love Japanese hospitality.

They want to say “No” but don’t say it clearly.

I had to texts back and forth forever when friends of mine and I were talking about where we meet because they didn’t say exactly what they want but they gave me nuances to “No”.

When my husband and I traveled to Kyoto, we were going to have dinner at a Japanese-potluck restaurant. He can’t sit on a floor, so I asked the guy whether there was a table seat. He was mumbling but didn’t answer “Yes” or “No”. He saw I was frustrated so he brought another girl, and she started mumbling too.

Well, these stories are bad examples, it might come from the Japanese custom that “respect others, consider other’s feelings first”.

I am used to it, yet sometimes I just need the answer “No”. 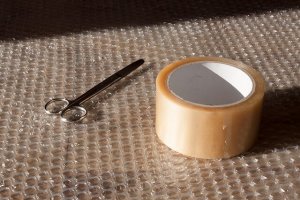 When opening a candy box, each product is in a small separate bag.

When you buy something fragile, they wrap really well not to be broken.

It is said over-wrapping or separate bags are not eco-friendly, however, however, I like separate bags of sweets because I can avoid eating too much and easy to keep lefts.

When we bought a bottle of water at Narita Airport, I tried to open the cap but it didn’t come off. I read the direction it was made for not coming off to avoid losing a cap.

My husband and I call over-packaged or well-packaged “Japanese packaging”.

I wrap fragile stuff really well when we pack.

For example, I wrap fragile stuff with a paper or thin plastic sheet first, wrap it with a bubble wrap sheet and taped really well.

So it is hard to unwrap it though.

Keep wallet in a back pocket 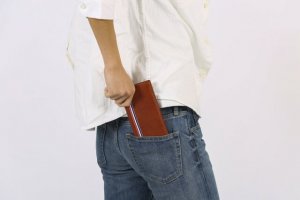 I often see men keeping their long wallets in back pockets in public.

Women put their wallets in their purse without closing it or even the purse doesn’t have zippers.

People leave bags and purses in their tables to get food in a food court.

I am not comfortable with these acts anymore after I live in abroad.

I talk about very few public trash bins in Japan due to preventing terrorism and also ill-mannered people who trash domestic garbage in this site.

There were trash cans outside of convenience stores use to be, however, most stores put trash cans inside because so many people throw domestic garbage in it.

Some of the polite Japanese people usually bring their trash back home, because they know there are very few trash cans around in public places.

Honestly, I get frustrated when I can’t find the place I can trash garbages but I never litter.

If you visit Japan, you might feel the same way but never litter, it’s a very bad manner in Japan. 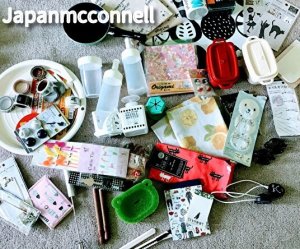 Some Goods I got in Japan last time…

The one thing I miss in Japan is Kawaii goods!

There are All 300 yen shops, I can find cute stuff there too.

If I rise the budget up more, I can find more cute and stylish goods at department stores such as “Tokyu hands”, “Loft” and “Takashimaya”.

If you look for something unique and funny, you can go “Don Quijote”, “Village vanguard”.

I wonder why Japanese goods are so cute! (and of course, good quality) 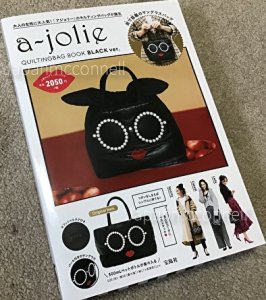 Trinkets, freebies with monthly magazines in Japan are creasy!

Deregulation of magazine appendix (2001), Reducing appendix price cap (2007), and influences from Korean magazines, the magazine market has been heating up to provide luxury items for getting new customers every month.

I am one of them, can’t stop buying the magazine because of freebie.

There is also a magazine called “Mook” in Japan.

Mook is not an actual magazine, it is like a booklet with the special item of fashion brand.

Japanese people including me have been confused if we really want magazines or freebies, but it is kind of fun checking out what will come next month.

If you are curious, go to convenience stores or book stores.