The native guide; All about unique Japan The Ultimate Guide Of Japanese Canned Beers; What You Need To Know About Types and Brands Of Canned Beer | Japanmcconnell
Home
Food & Recipes
Sponsored Link

Japanese likes drinking beer, even though whiskey high balls and Chuhai (Shochu cocktails) are very popular due to law-carb.

Moreover, in Japan, there are 4 types of canned beers, which are full-fledged beers, Happou Shu (Law-Malt-Beer), the third beers (beer-taste beverages) and Non-alcoholic beer.

Today, I am going to talk about popular products and what tastes like that can be the beer table guide what you should taste for the next Japan trip.

First, you should know that Japanese beer has a lighter taste than ale and easy to drink. It really goes well with Japanese traditional food such as sushi, sashimi, Yakitori. Also, Japanese people like extra chilled beer, draught beers often are served in an icy glass.

“Asahi Super Dry” (アサヒスーパードライ) has been leading can beer market for 9 years until 2018 and is believed it still is. (Beer brewing association stop revealing their market sharing from 2019.)

It is a sensational beer that debuted in 1987 as Japan’s first “dry beer” and revolutionized the Japanese beer industry.

There is no clear definition of “dry beer” in Japan, reducing the amount of malt used, adding more ingredients such as rice and corn starch, and using a newly-developed brewing method and yeast to increasing abv.

The feature of taste is “rich, crisp and dry”.

“Asahi Super Dry” has been loved with its excellent crisp, smooth, and refreshing by Japanese people.

Although it has a slight aroma, it is a fascinating beer with a refreshing feeling and a hard acidity that keeps fans around.

Kirin Brewery is a long-established company founded in 1880. Manufacturers with many popular makers such as “Kirin Lager Beer”, “Classic Lager”, and “Ichiban Shibori” which has a high reputation worldwide.

“Kirin Lager”(キリンラガー) has always been popular since the establishment of the brewing company, which has a good balance of spiciness, richness, and crispness. It is a masterpiece of Kirin Beer that was improved in 2010 and became delicious.

The taste is light and refreshed while leaving the bitterness of hops. Goes well with any meal.

I like “Kirin Beer” rather than “Asahi Super Dry” personaly, may be because of bitter and rich flavor. 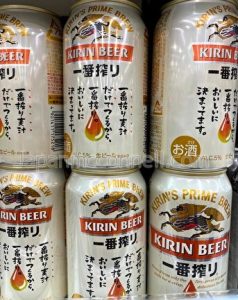 “Kirin Ichiban Shibori”(キリン一番搾り) is a premium beer made from only the first juicing that flows from “moromi” during the process of filtering wort.

• Moromi is an industry term for a fermentation mixture of yeast, koji, steamed rice, and brewing water all combined in one large tank.

Uses 100% malt for both sharpness and umami taste. A refreshing taste spreads in your mouth.

“Suntory Premium Malts” (サントリープレミアム・モルツ) is used only carefully selected ingredients. You can enjoy a rich richness, a firm taste, and a gorgeous scent. 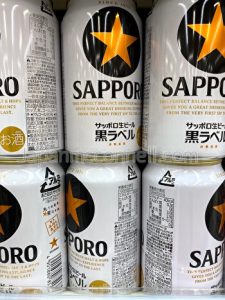 You are familiar with “Sapporo Premium Beer” rather than “Sapporo Kuro Label” (サッポロ 黒ラベル) which called in Japan.

Sapporo Breweries is enthusiastic about procuring raw materials based on the belief that “beer made using only carefully selected raw materials” so the company grows own barley and hops for their products with farmers.

It’s a good bitterness and richness, so it’s perfect for resetting your mouth. It is a rare beer that you can fully enjoy the unique flavor of grains.

Ebisu Beer is known as a premium beer in Japan, Its rich hop flavor and smooth texture have been loved by Beer lovers. You can enjoy the firm bitterness, just the authentic taste.