Osaka consumes the most amount of blowfish in Japan because blowfishes are caught mainly in western Japan.

Blowfish cuisine is considered a luxury culinary in Japan, but you can try this Japanese traditional delicacy at a reasonable price in Osaka.

The safety Of Blowfish Cuisine In Japan 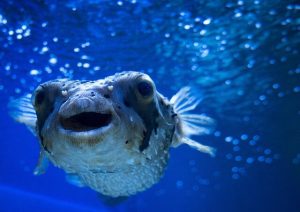 Blowfish is known as a very dangerous fish because it contains tetrodotoxin in the body. Japan is one of the countries that we eat dangerous poisonous fish, however, the cooking (providing) of blowfish is strictly regulated by the prefecture government in Japan, and there are relatively few symptoms of poisoning. (*The most of the cases occurred by unlicensed amateur chef cooked at home .)

One of the appealing of blowfish cuisine is that you can enjoy a variety of tastes depending on how to cook. 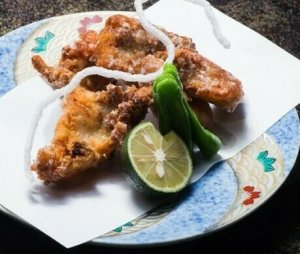 The Japanese hot pot called Nabe(なべ, 鍋) is the staple winter comfort food in Japan. There are many recipes of the dish, In Osaka, “Nabe” reffers to “Tecchiri” when you say “Nabe”, “Tecchiri” is very popular. 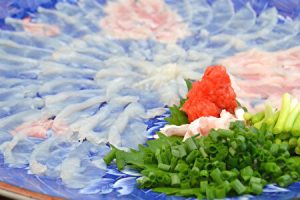 The representative blowfish dish can be “Tessa” “Fugu Sashi”as well as “Tecchiri”. You will be speechless when seeing the masterpieces of the blowfish sashimi plate. The transparent sashimi carefully prepared by the chef is so beautiful.

How to eat the super thin-sliced sashimi, first add garnishes into ponzu. Then, wrap few chives with few sliced Sashimi, and dip with plenty of ponzu chives.

There are many delicacies aka weird foods that we enjoy eating in Japan,blowfish sperm sack (Shirako, 白子) is definitely one of them. Rich creamy Blowfish’s Shirako is beloved as “the ocean gem” among Japanese connoisseurs. Outside of blowfish, salmon, cod, anglerfish, are also popular. Common dishes are instantly boiled Shirako and dipped with Ponzu, or instantly seared or grilled. 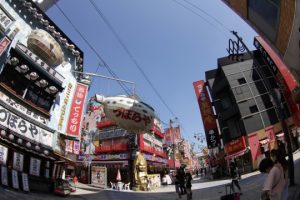 Zuboraya (closing September in 2020) is very famous, you see the blowfish shaped lantern in Osaka phots, don’t you? Around Kuromon Ichiba, you can find many blowfish specialties offering affordable prices. 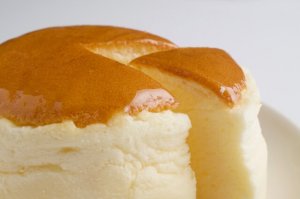 *This photo is for illustrative purposes.

Cheesecakes in Japan are very popular sweets even among Japanese people, but why does “Uncle Rikuro’s Cheesecake” stand out worldwide???

The one Japanese-style cheesecake is not like new york style at all, it is more similar to an egg souffle, which is super light, fluffy but rich and creamy.

“Uncle Rikuro’s cheesecake” is not “cheesy” because Uncle Rikuro was not a big fan of the cheesy taste on cheesecakes. So he wanted to make a cheesecake that anyone could enjoy, so is used Danish high-quality cream cheese, which has a delicate cheesy flavor. It is the key.

It can be said to most of the Japanese sweets, “It is not too sweet“.
No exception for this cheesecake, it is not so sweet, I mean compared with American sweets.

(My American husband doesn’t my baking sweets, because it is not sweet for him.)

Another reason why Rikuro’s cheesecake became so famous is “the performance”. Freshly baked cheesecakes are lined up and the process, until the brand is stamped, is performed at the store.

Uncle Rikuro’s Cheesecake is the cheesecake specialty shop operated by Rikuro Co., Ltd., which was founded in July 1956.

Not only cheese and raisins but also carefully selected ingredients are used to enhance the texture. As the big feature is the raisins which not so many patisseries use. Due to the raisins, the sweetness can be adjusted in your mouth with great harmony. 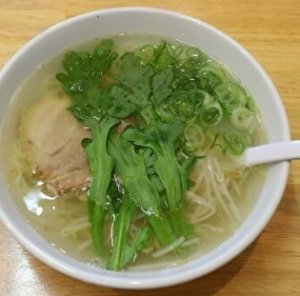 “Ramen noodle soup”, it is one of the food that you must try in Japan.

However, you can expect high-quality taste in Osaka because the Osaka people are very picky foodies.

Indeed, there are many Ramen noodle restaurants in Osaka. This is the one that you will be craving for the light soupy taste when after your stomach is bloated with other delicious delicacies.

“Yosuko Ramen”(揚子江ラーメン) is a local chain restaurant in Osaka beloved by local people.

It was established in 1964 and has been popular for a lightly clear soup and thin noodles since then.

The signature dish is definitely “Shio ramen”(塩ラーメン), that you can taste its simple, lightly salted, and rich flavored soup, but also ‘Wantan noodle soup”(ワンタン麺) is popular too.

Yosuko Ramen is not a heavy ramen noodle soup, it is good to warm your stomach after drinking too much cold beer!

Yosuko Ramen is closed their business in April 2020.

Osaka has a great variety of food all worthy of trying as calling “the Nation’s kitchen”.

Once stepping in Osaka make sure you give all of these a try during your trip AT LEAST.

I am sorry sometimes my story gets too long, hopefully, this list has helped you in planning your trip and hope you enjoy Osaka food!