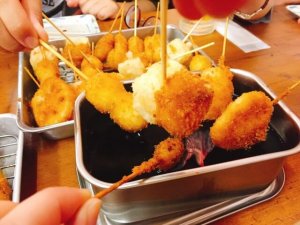 The popular Japanese food, “Kushikatsu” was born in “Shin Sekai”, Naniwa ward, in Osaka, in 1929.

Because of sharing sauce, SECOND DIPPING IS STRICTLY PROHIBITED.
However, you can scoop additional sauce using chopped cabbage if needed. Even don’t use chopsticks to grab a cabbage, Use your fingers directly to hold a cabbage.

“Kushikatsu Daruma”(串カツだるま) is the pioneer Kushikatsu restaurant that started serving deep-fried skewered food at the first time in Japan, 1929, it has been a very popular restaurant and always busy with locals and visitors.

Outside of the headquarter restaurant in Shinsekai, there are many branches throughout Osaka city, why not try famous Kushiage with a cold beer in Osaka!

Do not the double-dipping sauce, also use fingers to grab a cut cabbage for scooping extra sauce, not using chopsticks. (To avoid touching tips of chopsticks to the sauce.)

Udon noodles can be in your bucket list already, but do you know there is roughly the two taste of udon noodles soup in Japan? Which are “Kanto style” and “Kansai” style.

• What are Kanto & Kansai in Japanese??? 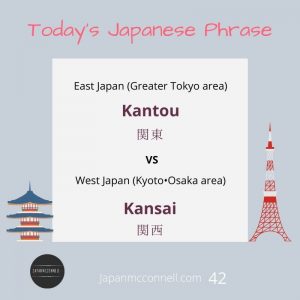 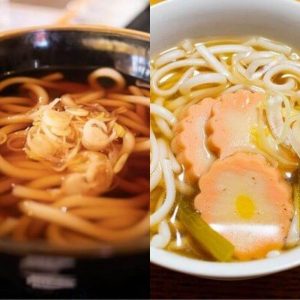 According to Kansai region people, Kantou style Udon soup is salty for them. It will be interesting to compare with these types of Udon noodles when visiting Japan.

Udon noodles(うどん) in Osaka is obviously “Kansai style” and is one of the popular food in Osaka.

By the way… I often see “Yakiudon”(焼きうどん ) in “Must-try Japanese food in Japan” lists on other sites, honestly, I am very surprised and don’t know why. Because “Yakiudon” to me (I am from Japan), it is a casual dish that usually eaten at home. In my experience, I don’t often see “Yakiudon” on the menu at restaurants. At *“Teppanyaki” restaurants such as “Okonomiyaki” “Monjayaki” restaurants, they often offer Yakiudon as a side menu. If you have a chance to cook in Japan, buy a “Yakiudon kit” at grocery stores. Especially, “Sugakiya Yakiudon” is recommended if you are in the Chubu region.

*Teppanyaki Restaurant means the restaurant (or Izakayas) offers dishes such as Okonomiyaki, Yakisoba noodles, cooked on the iron flat top grill, or self-style grill restaurant to cook its own flat top grill on each table. 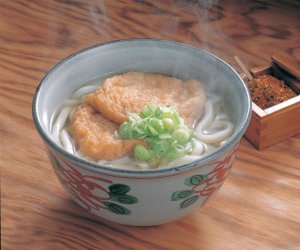 Among the many udon noodles, “Kitsune Udon” is Osaka’s soul food, and its roots are in Osaka.

It is said Usamiteii Matsubaya is the first restaurant to put “Kitsune Udon” on the menu, then it became the staple Udon menu nationwide.

Therefore, it can say that you must try Kansai-style Udon noodles which you can’t eat in the Kanto region and also eat Kitsune Udon at the pioneer Udon restaurant. 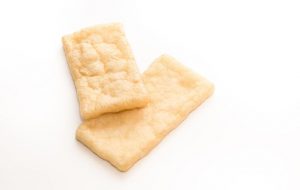 “Aburaage” (油揚げ) is made of “Tohu”, which is technically deep-fried thin-sliced Tofu (bean curd). It is often used for “Inari sushi” “miso soup” “Goma ae”. For as the topping of Kitsune Udon, Aburaage is cooked with soy sauce, sugar, Mirin, so it becomes tender, juicy, and sweet.

Why Does It Call “Kitsune” udon??? 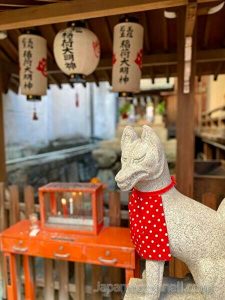 It is derived from the Japanese belief that the shrine fox’s favorite food is “Aburaage”. So Japanese people offer aburaage to the shrine fox deities of local shrines.

Therefore, aburaage gives the image a “fox” to Japanese people, then the Udon bowl with aburaage topping is called “Kitsune Udon”. 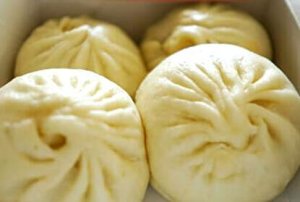 Personally, I strongly recommend you to try Chinese pork bun at 551 Horai, in Osaka. 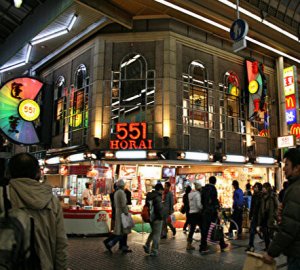 10 Popular food that the Japanese order at Izakaya in Japan