You have already known that Osaka attracts visitors with its unique food culture.

Indeed, Osaka has been called “The nation’s kitchen”, “Kuidaore city” which refers to the culinary city in Japan since ancient years.

“Kuidaore” is originally from the old idiom, “Osaka no Kuidaore”(大阪の食い倒れ) which means the food in Osaka is TOO GOOD and you will go broke due to spending too much money.

The reason why Osaka has been called “the foodie’s city” is because the city has been well-marketed with fresh ingredients.

Across the generations, Osaka is still very popular to enjoy delicious delicacies. Don’t worry, Osaka has many affordable street foods too!

Today, I am going to tell you 8 staple food in Osaka that you should eat when you are in Osaka. 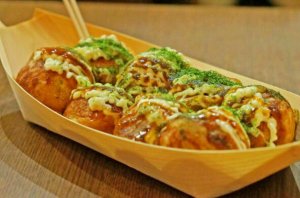 It’s no longer needed to explain “Takoyaki”(たこ焼き), isn’t it? 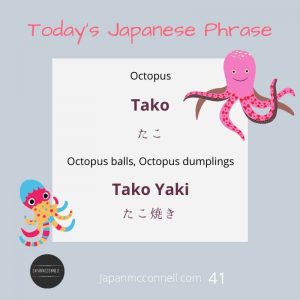 “TakoYaki” is one of popular street food in Japan and Osaka is the best-known for it.

As it called “Octopus Balls” or “Octopus Dumplings” in English, because of its shape and made of a flour-based batter. Cooked on the special iron grill pan and is served on the boat-shaped plate with two long picks or a pair of chopstick. 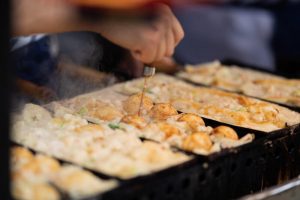 Generally, two sticks come with balls, but hard to eat. Use a pair of chopstick if you can find.

So you can eat “Takoyaki” nationwide, but why many sites still recommend eating “Takoyaki” in Osaka?

First of all, Takoyaki was born in Osaka since then, there are many Tokoyaki vendors throughout Osaka and have been competing against each other with their original tastes.

Also, it is said, Osaka-style Takoyaki is used “Dashi broth” for making the batter, so it is tasty even you eat without sauce.

Osaka-style Takoyaki is used the “green parts” of scallion, on the other hand, Takoyaki in Tokyo is often used “white parts”.

In Tokyo, some Takoyaki has sliced green cabbage in it, it is NOT the authentic style according to Osaka people.

Besides, there are two types of Takoyaki style even in Osaka, one is called “Naniwa Yaki”, another is called “Sauce Yaki”. 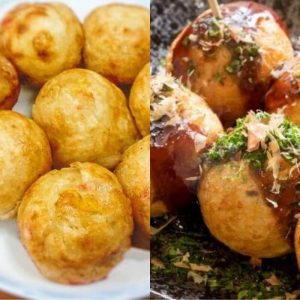 Naniwa(なにわ,浪速) is the old name of a town in Osaka city, it became one of the nicknames of Osaka.

“Naniwa Takoyaki” (浪速たこ焼き ) is the “Aizu ya” (会津屋) style which means Takoyaki is served without the rich sauce.

Of course, it is very flavorful without the sauce.

“Sauce Takoyaki” (ソースたこ焼き) is a standard style with the rich sauce that you can see everywhere in Japan and it is more familiar with phots of Takoyaki.

Osaka is Takoyaki mecca in Japan, there are countless Takoyaki vendors in Osaka as I mentioned. Meanwhile, the vendor became the pioneer of Takoyaki is “Aizuya”.

Nowadays, “Takoyaki” with the rich sauce and mayonnaise is a standard style, “Aizuya” style Takoyaki is simply enjoyed the taste of the Takoyaki as it is without any sauce or mayonnaise.

It’s a style that you can’t do without confidence in the taste of “Takoyaki” itself.

Do you want to try several Takiyaki vendors as much as you can in Osaka? In my Osaka itinerary DAY2, I make Takoyaki vendors hopping map in the Namba area. These 5 vendors are very popular in Osaka and these vendors have different tastes and textures.

2 Days Deep Osaka Itinerary "DAY 2"; The Takoyaki Vendor Hopping, Shopping, And More Osaka Food
Discover Osaka with my 2 days itinerary. Things To Do, Getting around, where to eat, what to eat. Packing all popular & deep Osaka spots. Lots of trivia from the Japanese native guide. 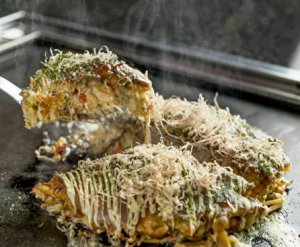 “Okonomi Yaki” (お好み焼き) is a savory Japanese unsweetened pancake made with a variety of ingredients, it could be fully snack or a meal.

As we as “Takoyaki”, “Okonomiyaki” is the popular Osaka food that you must try.

The ingredients for okonomiyaki can be changed to your favorites, but when you go to a vendor or restaurant that the chef cooks and serves, a basic menu is already fixed.

It’s grilled on a flat surface and can be topped with bonito flakes and nori flakes, and Japanese sweet and savory sauce similar to Worcestershire sauce and mayonnaise!!!

If you have “Osaka Amazing Pass”, you can get 10% discount price at “Osaka Boteju” where is the popular Okonomiyaki restaurant.

To talk about the history of Okonomiyaki, it’s gonna be too long, so long story short, Osaka and Hiroshima are representative Okonomiyaki places to eat.

Osaka (Kansai) style is Okonomiyaki made by mixing dough and ingredients before baking. Mix the cabbage, green onions, tempura scraps, and an egg and spread them on an iron plate. Then, cook it flat with the thin-sliced pork bellies on the dough.

Hiroshima style is Okonomiyaki making layers of various ingredients. The dough is cooked thinly like a crêpe, and layer sliced green cabbage, bean sprouts, thin-sliced pork bellies in order. Meanwhile, cook yakisoba noodles and sunny side egg on the side, then place pre-Okonomiyaki on the noodles and egg. Flip over it to complete. So, you will see Hiroshima-style is thicker. 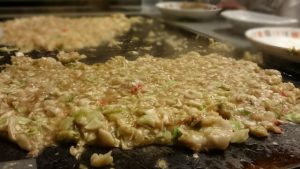 You may have heard “Tokyo•Monjayaki” as must-try food in Tokyo. The looking is really weird, it is like runny Okonomiyaki.

“Monjyayaki”(もんじゃ焼き) is mainly eaten in Tokyo area, it is the origin of Okonomiyaki.

Catch Up With New Trends In Japan: Homemade Cola Recipe