The native guide; All about unique Japan The Japanese Secret; The Benefits Of Sesame Oil In Cooking And Wellness | Japanmcconnell
Home
Food & Recipes
Sponsored Link

Sesame oil, which has long been staple cooking oil at home in Japan.

It can be used in various dishes for mainly Asian food, which has a rich, nutty, toasty flavor as you know, so it is a very versatile oil.

When we hear of Asian, Japanese food, and sesame oil, it sounds healthy, isn’t it?! s that so?

Today, let’s find out nutrition and the health benefits. 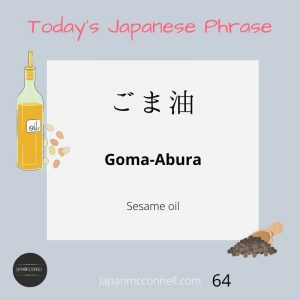 Sesame oil is called “Goma-Abura” (ごま油) in Japanese and generally, sesame oil in Japan is often made from white sesame seeds, but there are various types, and the taste differs depending on processes.

Generally, you can see two colors in sesame oil, do you think it’s the difference between white and black sesame seeds as the raw materials?

Actually, it is not. The difference in color between light sesame oil and dark sesame oil depends on the manufacturing process.

Both sesame oils are made from blends of white and black sesame seeds (the ratio defers among maker companies.) Besides, pure sesame oil sometimes refers to it does not use blended sesame seeds.

A fragrant scent and the flavor will improve with just a little addition, so it will be a full-fledged finish when you finish especially Asian dishes with it.

On the other hand, the sesame oil called light sesame oil (white or plain sesame oil) is the oil processed steamed not roasted sesame seeds and squeezed oil out.

White sesame oil is unscented and has a light taste, so it goes well with any food.
In Japan, it is also often used baking. 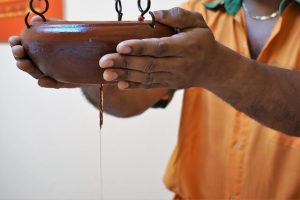 Also, white sesame oil can be expected to have a detoxifying effect. Apply oil massage to the face and body, and promoting the detox of toxins accumulated.

Not only black and white sesame seeds, but we also call it “Kin-Goma” which literally means “Golden sesame seeds” in Japan.

Positive Effects Of Sesame Oil On Health And Cooking

Sesame oil is rich in unsaturated fatty acids such as linoleic acid, an essential fatty acid that cannot be produced by the body, and oleic acid, which is expected to reduce LDL cholesterol.

It also contains sesamin and vitamin E that have a high level of antioxidants.

In addition, the antioxidant action of sesamin and selenium has the effect of protecting cells from damage from active oxygen.

Compared to other cooking oils, sesame oil is less likely to oxidize, so it can be stored for about 2 years if it is unopened.

After opening it, store it in a cool and avoid direct sunlight, and seal tightly to prevent oxidation. It doesn’t need to be stored in a refrigerator because of the strong antioxidant power

Sesame oil is one of the healthy oils that can bring health benefits to your body. Sesame oil contains high levels of “sesamin,” a component that has the function of suppressing active oxygen, which can be expected to anti-aging effect.

Moreover, another experiment has also shown that taking sesamin and vitamin E together may reduce chronic fatigue.

Sesamin is one of the main lignan compounds that is contained only in sesame seed. Several studies have reported that sesamin has cholesterol-lowering effects, synergistic effects with vitamin E, hypertension-suppressing effects, antioxidant effects, hepatoprotective effects, and autonomic nervous regulation effects.

Sesame oil contains 0.5–1.1% sesamin, why not start drizzle sesame oil on your salad?

Another major feature of sesame oil is that it is hard to oxidize. Oil has the characteristic of being easily oxidized when exposed to air, light, and heat. But, sesame oil has the property of being difficult to oxidize.

Because sesame oil is not easily oxidized, even it is suitable for stir-fry, grill, and deep-fry without becoming oily and greasy.

The stir fry is a staple sesame oil dish. The rich scent of sesame is appetizing. Not only for Asian food but also try to drizzle a little sesame oil for the pasta to finish.

Sesame oil is also good for deep-fry because it is resistant to heat and does not easily deteriorate.
Even if you mix sesame oil with frying oil, it will be delicious with the sesame flavor.

Add Flavor To The Dish

To bring out the sesame oil flavor, it is important not to cook it longer. When you use sesame oil for cooking but still fully want to enjoy its rich aroma, toss sesame oil around the food after turning off the heat.

The Japanese often use sesame oil in daily meals.

A basic Japanese home cooking as a side dish, Aemono, is also the staple sesame oil cooking. Not only you can taste the flavor of sesame oil, but also its aroma enhances the umami in ingredients as they are.

In a unique way, mix it with soy sauce as a dipping sauce for grilled meat, Sashimi, sushi, Chinese dumplings. Add a little vinegar to it and marinade food is also an ideal idea.

Since toasted sesame oil has a fragrant flavor and richness, so it is also used as a condiment and seasoning.

Of course, it is perfect for salad dressing. In Japan, we call “Chuka dressing” (Chinese dressing) that the dressing is made of sesame oil and soy sauce. I have the recipe in this post if you are interested.

Japanese-Style "Harusame" Bean Thread Noodle Salad
Glass noodles are a common food in Asian cuisine, and it is called "Harusame" in Japanese. Japanese Harusame noodles are mainly made of potato starch. Harusame salad is also a popular salad menu in Japan- it's refreshing and addictive with sesame oil and soy sauce-based dressing. You can use Mung Bean Thread Vermicelli instead, but not rice noodles if you care about calories.

It also gives a nice touch to an onigiri rice ball with just sesame oil and salt!
It’s simple, but you can feel a big hint of toasty, nutty flavor on the rice ball.

Besides, add 1 tbsp of sesame oil when you cook rice to make the rice plump and lustrous.

Whether you believe it or not, try sesame oil instead of chocolate on vanilla ice cream.

Sesame oil is one of the excellent oil that can bring health benefits to you, however, it is oil. So, make sure to keep the appropriate amount (1-2 tbsp daily) when taking it by mouth.

As the point of a healthy nutrition diet, perilla seed oil, extra virgin olive oil are better than sesame oil to intake by mouth, however, sesamin power only exists in sesame oil.

The most appealing point of sesame oil, especially toasted sesame oil, is its appetitive scent. My husband is addicted to sesame oil and so sensitive to its aroma, I can easily pull him out of his den.

If you like Asian cooking, you must have one which has high quality of flavor and aroma.

My Selection Of Toasted Sesame Oil

I think Korean sesame oil is the best and especially, this one is my favorite. I can be no longer switch to another since I had this.

It’s so flavorful, no comparison.

No words to say, just try this.

Kadoya Sesame oil is carefully pressed oil from roasting high-quality sesame seeds at a high temperature. Gentle nice but flavourful sesame aroma.
It is a long-selling product in Japan.

Speaking of the power of Sesamin, you need to take it from sesame oil because the component is found very few in seed and hard to take from only seeds. Yet, sesame seeds have excellent nutrition and health benefits. Although sesame contains 50% or more fat, it has strong anti-oxidize property and contains about 20% of protein. Sesame seeds are one of the super-foods that are more nutritious than other cereals and fruits and vegetables.

Black And White Sesame seeds; Health benefits, How to use in Japanese Cooking
Sesame seeds are essential in Japanese cooking. It also gets attention as one of healthy grain, and the Japanese take advantage of sesame benefits! So, what's are the health benefits of sesame seeds, and are they different among black, white, and golden? Let's "open the sesame" with me!.