“Shio Koji” aka Koji Rice, which I am talking about today, is an appealing fermented condiment, you can’t miss its tremendous health and cooking benefits in your life.

This mysterious condiment is deeply rooted in, Japanese culture, when you see Miso paste, soy sauce, Mirin, and Sake…, which is all made from Koji.

Not only Koji is one of the raw materials, but also, it can be a sauce of various minerals and vitamins, and also it is often used as condiments while adding rich Umami flavor.

It is often used to moisten and tenderize meat in Japanese cooking.

I am one of the cooking lovers who have been obsessed with Shio koji marinating.

Today, I am going to tell you about the ultimate guide of “Shio Koji”.

Simply, “Koji”(麹) is the moldy steamed grains such as barley, rice, and beans propagated by “Aspergillus oryzae”.

“Aspergillus oryzae” is a type of mold known as kōji mold (Japanese: ニホンコウジカビ (日本麹菌), is essential for the fermentation and aging of miso, soy sauce, and Japanese sake, and has been certified as a bacterium representing Japan.

I’m sure you might think that when you think about mold, “Eh? Is that safe?”

Of course, koji molds in those beneficial molds,
in other words, koji is a fermented food.

By the action of these enzymes, the meat is tenderized with a better taste.

Shio-koji is made of koji rice, salt, and water and fermented until it gets thickened and produces a sweet aroma.

In 2011, the “Shio-koji boom” occurred in Japan, and there have been many cooking recipes of Shio Koji produced since then.

A mixture of salt and koji, it is salty, but there are the umami and sweet tastes produced by fermentation.

Therefore, it can be substituted for salt or soy sauce while reducing sodium, moreover, it can bring out the umami flavor of food.

It can be used as a sauce. It is really a versatile seasoning.

Since shio koji is a fermented food, it brings various health benefits as you know other fermented food such as Natto beans, miso paste, yogurt, pickles, and Kombucha.

Shio koji can not only turn the natural taste into a deep umami flavor while breaking down proteins in the food but also it is expected to reduce sodium content in the dish while substituting shio-koji for salt and soy sauce.

Shio-Koji is a rich nutrition source such as the enzyme, Vitamin B1, Vitamin B2, B6, GABA, essential amino acids, peptides, kojic acid, etc.

How To Use Shio Koji

It’s easy to use than you expected, just use shio-koji as the substitute for salt and soy sauce.

As I mentioned, Shio koji can be a great tenderizer for meat. Just marinate the meat (especially goes well with chicken and pork), they’ll be the tender, juicy (moist), savory ingredients.

Add a tablespoon of shio-koji per 2 cups of soup broth or just boiled water.

Adjust the amount of shio-koji to your taste.

Just try it, don’t think too much.

Throw a tablespoon of shio-koji into your regular soup such as chicken soup, tomato soup, minestrone, wedding soup, and beef mushroom soup!

This Japanese soup is a super-light taste packed with Umami flavor from Dashi (hondashi powder) and Shio-koji, so you can add soy sauce or miso paste if desired.

Also, add your choice of protein such as chicken, pork, beef, shrimp, or tofu as the vegetarian/ vegan choice. 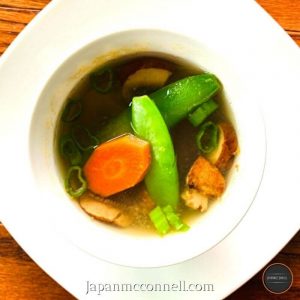 How To Make Japanese TSUKEMONO Pickles With Shio-Koji

Mix your choice of vegetables and 10% shio koji in a container/ a freezer bag and let it sit overnight. For *Asazuke pickles, you can enjoy immediately them after mixing vegetables and shio-koji.

When cooking rice, add about 1 teaspoon to 2 cups of rice to make it even more delicious.

Yet, what I like to use this amazing fermented food is to marinate Poultry, Meat, and Fish.

Only marinating the meat with shio Koji, will be dramatically tender, moist, and has a rich natural sweet flavor.

For the fish, shio-koji can cut off the fishy taste while boosting a rich Umami flavor.

How does shio-koji work for tenderizing and growing umami flavor in ingredients?

Koji breaks down starches and proteins into sugars and amino acids.

In other words, Koji breaks down the protein in the meat, and even adds amino acid which is the main Umami ingredient.

Simply, apply 10% shio-koji to the total amount of meat/ fish and marinate it preferably overnight. Then, cook it as you like.

You may need to take some time to get used to the “koji” flavor. (So did I.)

If you are worried about the unique flavor of the dish, rinse or wipe the shio-koji as much as you can before cooking.

I always marinate pork loin chops for Japanese cutlet with shio koji and freeze them.

Shio-koji is really a saver since pork loin chops get easily dried and chewy.

My American husband doesn’t say anything about the hidden flavor (fruity? yeasty? funky sweet?) and loves my Japanese pork cutlet, so it shouldn’t bother you too.

(But marinating with shio koji is actually secret for him because he will be scared and not try it anymore.)

Avoid applying shio-koji too much, use it for approximately 10% of the weight of the meat.

How Long You Should Marinate With Shio-Koji

It depends on how thick the meat is, but if you marinate it for about 30 minutes, it will be tender enough.

The marinating time is depending on the size and type of ingredient you are working with, yet, it should be anytime between 30 minutes to 24 hours.

Yet, for seafood, the marinating time shortens to 10-15 minutes.

Only you need to be sure, since the Koji is powerful, it can break down protein too much or salt the ingredients too much.

Because the shio-koji pause its enzyme working in the freezer, so you can marinate meat and freeze it. Besides, in this way, it prevents getting food too salty.

Koji is a mold that is at the heart to make shio-koji which is grown on rice.

Homemade shio-koji is quite easy and the most difficult part could be finding the koji spores (koji-kin).

No worries! You can find rice-koji the easier way is using AMAZON! (oh, G.)

Salt is the key to making good koji rice, so use natural mineral salt such as sea salt. I use Himalayan pink salt. Avoid table salt.

Thoroughly clean and sterilize the container before use and allow it to dry before use. It is better to choose a see-through container so that you can check the fermentation status.

If you have a lump of koji rice, please make it into grains and mix with salt evenly.

Please note that salt or koji may rot if the salt is not spread all over the koji rice.

Since gas is generated, do not close a lid tight. It is also good to use cheesecloth instead of the lid.

Stir the koji rice once a day.

Fermentation becomes uniform, so you can get good shio koji.

If the koji absorbs water and the water level goes down, add water each time.

Add just enough water until the koji is covered.

If adding water is too much, the salt concentration will decrease, causing decay and discoloration.

Generally, the fermentation will be completed in 10 to 14 days, but it may be slower when the temperature is below 20 degrees Celsius (68F).

When the rice grains are very soft and it looks like porridge, it is a sign to finish.

Shio-Koji Products You Want To Buy

The perfect big size for plenty of use. Reduced 20% sodium content.

This product with the protease (proteolytic enzyme) activity increased.

It makes meat and fish tender and flavorful.

This is a liquid type of Shio Koji, so you don’t have to be hesitant to use it rather than porridge-looking koji-rice.

Because of the clear-brown liquid, it doesn’t bother the natural color and texture of the ingredients.

How To Make Shio Koji At Home

HOW TO MAKE SHIO KOJI AT HOME

How To Keep SHIO-KOJI

Shio Koji can be stored in a refrigerator for up to 6 months.

Use a clean spoon each time use, and avoid keeping the spoon in the container.

You can freeze Shio-koji, and it’s easy to use since it won’t be frozen completely.

The fermentation process will be inactivated in a freezer. However, the flavor will gradually be lost, so you should use it within 6 months.

Fermentation can be stopped in a freezer. However, the flavor will gradually be lost, so you should use it within 6 months.

When shio koji is repeatedly frozen and thawed, the deterioration rate will increase. Make small batches if you think you don’t use much one time.

How To Boil Eggs Perfectly In Japanese Cooking

Foodies! Don’t Miss These Staple Osaka Food From The Nation’s Kitchen; With Little Bit Trivia From The Japanese Guide

Become A Sake Connoisseur: How To Make Kanzake (Hot Sake) At Home