I often use the term, “Shochu”, when I talk about Japanese drinking culture,

do you know Shochu?

“Shochu”(焼酎) is one of representative alcohol in Japan, “shochu” is the second consumed alcohol following Japanese sake.

You can purchase “shochu” in the US or your country, the most popular is “Iichiko”,

I am going to explain what shochu is, and how you can enjoy it.

“Shochu”(焼酎) is a representative “Distilled liquor” in Japan.
You may have heard “Japanese Shochu”, “Japanese vodka” or “Japanese distilled spirits” in English.

“Shochu” has several kinds of flavor depends on its main ingredients such as potatoes, rice, barley.

Besides, top-quality of Otsuruishochu is called “Honkaku shochu” (本格焼酎) is, genuine shochu, single-distilled, allowing it to use only carefully selected ingredients.

By the way, “Soju” is Korean liquor.

The difference between Shochu and Sake 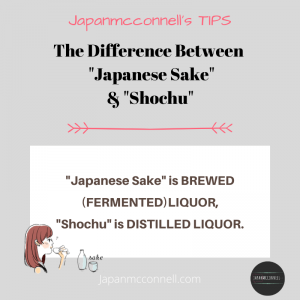 Simply the big difference between sake and shochu is sake is a “brewed sake” made by fermenting rice. Shochu is a “distilled liquor” that has undergone a process called “distillation” based on brewed liquor made by fermenting various ingredients.

The main ingredient of Sake is “rice”, and major kinds of shochu is made from “barley”, “potatoes”, “sugarcane” and “rice”.

Although rice is used as the main ingredient for both, there are differences.

The rice for making Shochu is regular edible rice for food, but one used for sake is the special rice to be used for making Sake only, which contains more protein, rich flavor, and large grain.

To taste, Sake is enjoyable with straight, (with cold, warm and hot temperature)

Shochu has several ways to enjoy such as straight, on the rock, highball and so on.

It is interesting that “Shochu” flavor differs dramatically depend on the main ingredients, quality, and process.

Sometimes you can’t believe it is the same spirits. 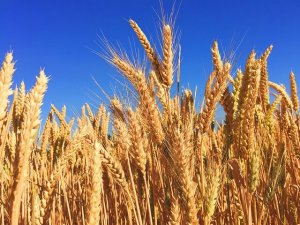 Shochu made from barley is called “Mugi Jochu”(麦焼酎).

“Mugi Jochu” has high alcohol content but it is a clear, dry taste and light cense among kinds of Shochu, great for a “Shochu” beginner.

The proper word is “Shochu” but in Japanese grammar, it sometimes changes sounds in certain uses.

Shochu made from potatoes is called “Imo Jochu”(芋焼酎).

“Imo shochu” with a strong individuality centered on Kagoshima and Miyazaki prefectures in Kyusyu island. There are many variations, from those with sweetness and flavor like potatoes to those with fruity aroma.

The taste varies by kinds of sweet potatoes, but “Imo Jochu has a uniquely rich and sweet flavor like potatoes to those with a fruity aroma.

If you have had “potato vodka”, it’s not very similar, yet it gives you some hints to describe the ‘Imo jochu” taste.

Someone says “Imo Jochu” is close to tequila flavor, but I am not sure… 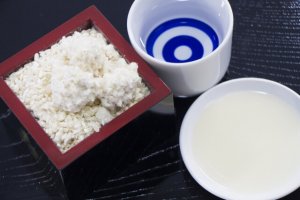 Shochu made from potatoes is called “Kome Jochu”(米焼酎).

“Rice”- Japanese people love.
Not only eating, but it has also been used as a base of Japanese sake and Shochu.

“Kome jochu” is smooth, and slightly milky and also smooth to drink as well as Mugi Jochu.

The subtle sweetness of rice even gives you a fruity flavor like “Japanese Sake”.

“Awamori”(泡盛) is the local Shochu made in Okinawa prefecture.

It has a “unique strong scent” andstimulating taste”, so it’s a taste that people either love or hate.

It is made from long-grain rice from Thailand and Okinawa prefecture, for Awamori, black “Koji” must be used that infused unique strong flavor.

“Koji”(麹) is cooked rice that has been inoculated with Aspergillus oryzae, a mold, which is the essential ingrediants to make sake, miso, soy sauce, AND SHOCYU.

“Awamori” has been loved for long Okinawa history, and the alcohol content is higher than other Shochu so beginners may want to start lower ABV (25%) to taste for the first time.

The sweet and fruity aroma from sugarcane and its soft texture is attractive.

It is called “Japanese rum” and features a unique Western sweet scent that is not found in other shochu.

Moreover, it is not allowed to add any additives outside of water due to the regulation to sell as “Honkaku Shochu”, and only one produced in the Amami archipelago, Kagoshima prefecture, is called as “Kokutou Syochu”.

It is an endless dilemma for us about the relationship between drinking alcohol and diet.

Find out the basic calories and sugar contents.

Is shochu a “fat liquor”? I’m curious. I compared the ingredients with other sake.

It is too fast to be shocked by the calories of Shochu and whiskey at first glance!

“Shochu” and “whiskey” has higher alcohol contents so numbers of calories get high, but generally theses alcohol are enjoyable with a small amount such as “on the rocks” or mixed with soda.

Surely beer is low in calories in the table, but people likey to be able to keep drinking beers or wines due to due to the lower alcohol contents.

*a calories of your favorite beer (External Link)

Besides, “distilled liquor” has sugar-free such as Shochu, whiskey, vodka, and gin.

Speaking about Japanese Shochu, you may be aware of “Otsurui Shochu” aka “white liquor” which usually used for a mixed drink. Some Otsurui shochu is added sugar as flavor. If it’s available, choose one said “Sugar-Free”- “糖質０”. 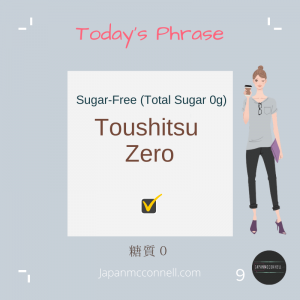 • Can you believe you can drink beer during Keto Diet?

Best Low-Carb Beers You Can Drink On The Keto Diet During Traveling In Japan
There are many theories about low-carb, sugar-free products, but you want to care about calories especially booze. In Japan, you don't have to worry about calculating calories, sugar contains, carbs, you will be impressed by how many beer-taste beverages with low-carb, low-sugar, non-alcohol in the row. 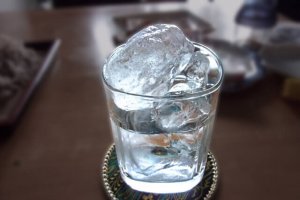 Experts may say “drink straight or on the rock are the best way to taste Shochu without killing its aroma and flavor”, but it is not the only way to enjoy “Shochu”.

Like people who are not strong for alcohol beverages still have fun to taste, there are several ways to enjoy “Shochu” smoothly and tasty.

“Shochu” has a unique flavor and aroma as I mentioned, so some people can’t stand it.

My husband, he likes drinking (according to him, he is Irish-American), but he doesn’t like “Shochu” much.

But he loves “Chuhai” and “Sour” that I am going to talk about in this section.

“Mizuwari” (水割り), “Oyuwari”(お湯割り) are popular a smooth way to taste “Shochu” especially for who want to taste “Unique shochu aroma and flavor”.

The Native Ultimate Guide; How To Enjoy Shochu Like A Japanese
As with other national alcoholic beverages, Japanese like drinking "Shochu" in a variety of ways. How should you have a "Shochu" as a beginner? What kinds of "Shochu" should you choose? Here's the native ultimate guide for the first step for sipping Japanese Shochu at home.

Somehow all American people who I know are addicted “ChuHi” very much.

“Shochu highball” aka “ChuHi”(チューハイ)is the very popular and representative cocktail of “Shochu”.

“Highball” is technically cocktail mixed with sprite and carbonated liquids, like “Whiskey highball”I talk about here.

Originally, “Chuhi” was used to be “Shochu highball” mixed with carbonated water and lemon juice, but today there are more fruit flavors such as Japanese limes, grapefruits, peach, grapes.

So “Chuhi” is supposed to use “Shochu” according to the theory, but today some chaos exists over there. 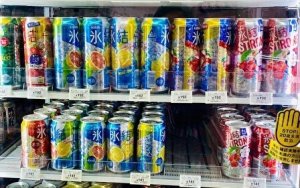 At Izakayas, they have original “ChuHi-Mix” and make “original ChuHi”.

Supposedly, you can call “ChuHi” a drink mixed “Shochu” aka “distilled spirits”, carbonated water, and your preferred fruit flavor.

“Shocyu” (焼酎) is one of the representatives and essential distilled liquor to talk about Japanese drinking culture.

If you want to experience Japanese culture, try some at home!

In my area, “Yokaichi” is available at the local liquor shop.

“Imo Jochu”, “Awamori”, “Kokutoujochu” may need some time to get used to its unique aroma and flavor,

try once when you visit Izakaya, in Japan!!!

if you want to drink the authentic shochu make sure it’s “honkaku shochu”. 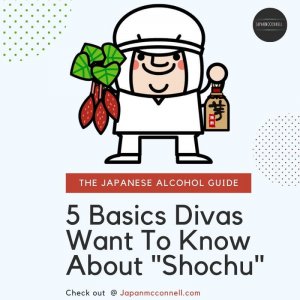 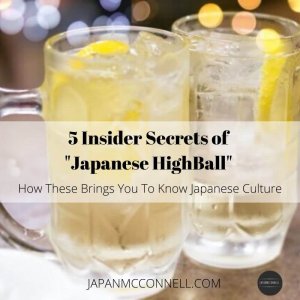 Do you want to know “Izakaya” culture in Japan??? 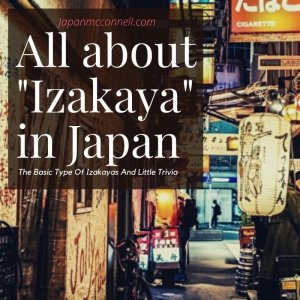 Best Japanese Bath Salts You Should Buy For Your Luxury Time

Sponsored Link
How 5 Insider secrets of “Japanese HighBall” Brings You To Know Japanese Culture
The Native Ultimate Guide; How To Enjoy Shochu Like A Japanese
Sponsored Link
Rico McConnell

How To Make Japanese Style Lemon Sour At Home
DAISO in Japan; Take A Peek Japanese Unique 100 Yen Shop and Learn Japanese Culture
Black And White Sesame seeds; Health benefits, How to use in Japanese Cooking
Best Japanese Bath Salts You Should Buy For Your Luxury Time
Best Low-Carb Beers You Can Drink On The Keto Diet During Traveling In Japan
The Ultimate Guide Of Japanese Wooden Cutting Board; The Best Wood And How to Maintain
The Japanese Canned Chu-Hi Guide; Chu-Hi Kudasai!
10 Best Japanese Bottled Unsweetened Teas
5 Things You Should Know About Hinoki Cypress; Hinoki Benefits And The relationship With The Japanese Life
The Meaning Of Senba Zuru; Why The Japanese Make The Thousand Paper Cranes