Taking a bath is refreshing, relaxing, and cozy. Besides, it can bring many health benefits to your body.
To enjoy effective bathing, read the Japanese bathing tip and the best Japanese bath salts guide in my posts.

But do you know that there are many unexpected accidents in bathing, especially in the cold season? To help you bathe more safely and effectively and protect your family and yourself, check the list below to see how to take proper bath steps.

Do you know that heatstroke can be occurred even while taking a bath?

You may like taking a bath for a long-period because soaking in the hot tub is cozy, but a long bath can cause dehydration.

Before taking a bath, be sure to drink a glass of water, or barley tea and sports drink that you can intake minerals.

Japanese Tea 101; Start The Barley Tea Life For Wellness
Learn more about Barley Tea, its uses health benefits, and how to brew barley tea at home. Barley tea is the common summer drink in Japan, not only its natty but clear taste but also has many health benefits such as heatstroke prevention. If you looking for a new type of tea for your healthy life, learn barley tea in this post!

Heat shockis a stress response caused by a sudden temperature change which leads to blood pressure fluctuations, damaging blood vessels and the heart. When you move from a warm place to a cold place, your body contracts blood vessels so that it doesn’t lose body heat, causing your blood pressure to skyrocket. Especially in elderly people with arteriosclerosis are likely to cause fatal consequences. Even young people with high blood pressure or overweight have a high risk of stroke or myocardial infarction as well.

It’s a common accident in Japan because there aren’t many houses built in the central heating system. In the United States where I live, it is common so you may not have to worry. However, like my master bathroom, it’s really cold not like other rooms although my house has a heating system. If you have the same issue, you have to be careful about the temperature difference in the bathroom especially in the cold season.

Use a heater, make the bathroom and powder room toasty before bathing.

Every year in Japan, about three times more people have lost their lives than those by traffic due to heat shock and heatstroke in the bathroom. Not only elders but also cases in their twenties who do not have chronic diseases, so be careful no matter how young or healthy you are if your bathroom usually gets really cold.
Moreover, remind heating a bathroom when traveling in Japan and stay in a private house.

It is necessary to pay attention not only to the cold bathroom but also to the difference in outside temperature in the cold winter. Avoid bathing if your body is cold right after coming back from outside.

Tell Family You Are Taking A Bath

If you live with a family or roommates, let them know that you will take a bath.

By the way, if you have high blood pressure, take a bath by getting cold in the evening when it gets cold, or take a bath before meals.

A human falls asleep when the body temperature drops. Therefore, It is best to take a bath 1-2 hours before bedtime to get better sleep.

Hot water makes the sympathetic nervous system awake-means your body gets excited, you hardly can sleep. Soak your body in lukewarm water (38-40 ° C) for 15 to 20 minutes.

If you take a bath right after drinking alcohol, your body will warm up and increase the blood flow- a large amount of blood is sent to the whole body, which reduces blood flow in the brain and heart, which causes cerebral anemia, arrhythmias, and heart attacks.

Blood pressure drops temporarily after drinking alcohol and also soaking in a hot bath at 38℃ – 40 ℃/ 100F -104 F leads to lower blood pressure, this synergistic effect can lead to faintness and drowning in the worst case.

It is better to avoid taking a bath right after drinking alcohol and wait for at least 2 hours.

In The Hot Tub 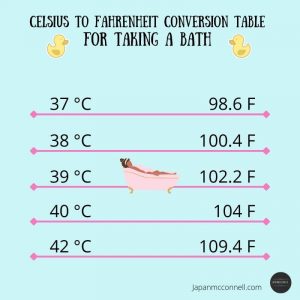 Avoid hot water above 41 ℃ as it can increase blood pressure.

When taking a bath in 42 ° C water, the body temperature rises by about 1 ° C in 10 minutes. If you take a full-body bath (soak in your shoulders), your body temperature will exceed 40 ° C in about 30 minutes. Therefore, soaking the full body for a long period in the hot water over 42 ° C is a lot of risk of losing consciousness due to heatstroke.

A long-bath can cause low blood pressure and in the worst case, it can cause drowning.

Since you feel so good and cozy in the hot bath and get sleepy, but you don’t know the condition is if you are just relaxing or if your brain is running out of oxygen due to extremely low blood pressure- it is a sign to get out of the bathtub when you feel sleepy.

Besides, elderly people are losing temperature sensitivity compared with younger people, they may not notice the body heat is too high, which is a higher risk of heatstroke in the hot tub.

If you have a bath table, it can be protected from the danger of drowning. If you feel sick and be able to get up, lean the body on it and call help.

Put Towel On The Shoulders

Bathing under the chest is called a half-body bath method, which does not burden the body (heart). Put a towel or clothes that you don’t mind wet on your shoulders to keep your upper body warm.

It’s common in Japan that a bath has a cover, but I don’t know in your country.

If you have a bath table, it can be an alternative to a cover to keep the water temperature… (? maybe a little…)

According to this study, approximately 800 ml-body water will lose by bathing in hot water at 41℃ for 15 minutes.

Japanese Tea 101; Start The Barley Tea Life For Wellness
Learn more about Barley Tea, its uses health benefits, and how to brew barley tea at home. Barley tea is the common summer drink in Japan, not only its natty but clear taste but also has many health benefits such as heatstroke prevention. If you looking for a new type of tea for your healthy life, learn barley tea in this post!

Hurry up moisturize your whole body after getting out of the bath!
In the case of just tap water without using bath salts, the skin starts being dried 10 minutes after bathing, so skincare should be done as soon as possible.

Have you done the correct ways that I told you today the last time you took a bath? Enjoy taking the right bath for your relaxation and health.

In this blog, I have often recommended taking a bath because of “hot spring effects”- warming your body in the tub brings many health benefits. So, I want you to know about the essential safety tips for protecting your life.

This post is also informative to take a bath at home and also hot springs in Japan.

Japanese Hot Spring "Onsen" Effects; Health Benefits And Risks
Japan is home to Onsen as hot springs which are a highly popular destination among people who are looking for Japanese aesthetic. To enjoy public Onsen hot springs where people (monkeys!) go relax and soothe their stresses, you should know about Dos and Donts before traveling to Japan. The ultimate guide in this post tells you not only Onsen etiquette but also health risks when bathing is not the right way.

To take a bath more effectively and also too protect your skin, Japanese bath salts are recommended.

Best Japanese Bath Salts You Should Buy For Your Luxury Time
Japanese bath salts are one of the bath essentials for the Japanese, there are various types and forms. Japanese bath salts are commonly used for therapeutic and relaxation effects with their ingredients, colors, and aromas. This post provides the perfect way to experience the Japanese bath ritual. If you are looking for a Japanese hot spring "Onsen" effect, here is the perfect bath salt in this post. All products in this post are available online.

Besides, I tell you in this post about how to bathe effectively depends on your health concerns.

Japanese Bathing Tips: Incorporating Self Care Management For Working Divas
Japanese bathing ritual offers more than surface benefits, which the ancient Japanese bathing tradition is perfect to soothe working divas. In this post, informative bathing tips depends on your concerns such as fatigue, stiff neck and shoulders, back pain, better sleep...Self-care is not selfish. Incorporate the Japanese Bathing Culture for tomorrow.

How To Make Japanese Style Lemon Sour At Home
5 Things You Should Know About Hinoki Cypress; Hinoki Benefits And The relationship With The Japanese Life
Black And White Sesame seeds; Health benefits, How to use in Japanese Cooking
The Meaning Of Senba Zuru; Why The Japanese Make The Thousand Paper Cranes
Best Low-Carb Beers You Can Drink On The Keto Diet During Traveling In Japan
The Ultimate Guide Of Japanese Wooden Cutting Board; The Best Wood And How to Maintain
The Japanese Canned Chu-Hi Guide; Chu-Hi Kudasai!
10 Best Japanese Bottled Unsweetened Teas
Rico's Japanese Cooking Tips; Preparing Shrimps And Removing Fishy Taste
Best Japanese Bath Salts You Should Buy For Your Luxury Time