Kinpira is one of the staple side dishes in Japanese home cooking which Julianned vegetables are stir-fried with soy sauce-based sweet seasoning. In particular, Julienned burdock is called Kinpira Gobo and the name kinpira came to be used because of it.

Generally, root vegetables such as burdock (Gobo in Japanese,) lotus root (Renkon), and carrots are common ingredients for Kinpira.

If you are wondering what’s Kinpira when you watch “midnight diner 3”, I will give you the ultimate guide of Kinpira.

In addition to vegetables, konjak, protein such as chicken, pork, and beef ribs may be added. 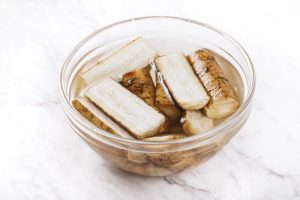 First of all, burdock can’t be missed when we talk about the dish, “Kinpira”.

The first main ingredient used for the dish Kinpira began a long time ago in Japan is burdock.

Did you know that until recently, only the Japanese enjoy burdock in Japanese cooking?

Thre high-fiber vegetable! burdock has attracted attention for its health benefits and can be eaten in Korea and Taiwan. But, the Japanese respect burdock called “Gobo(u)” more than any countries.

The dietary fiber contained in burdock is 5.7 grams per 100 grams, which is an extremely high level among vegetables. Among dietary fibers, insoluble dietary fiber such as lignin can be expected to have an intestinal regulating effect and regulating cholesterol level. 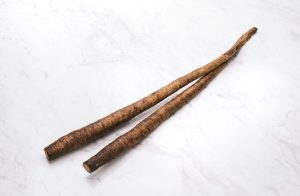 However, finding burdock is not easy, especially in countries other than Japan, so you can use parsnips instead of burdock. 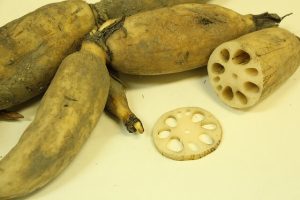 Lotus roots are called “Renkon” in Japan, and it’s the staple vegetable in Japanese cooking as well as burdock.

Lotus root refers to the enlarged part of the rhizome of the lotus. Since it looks like a root, it has come to be called lotus root aka Renkon.

80-85% of the edible part of the lotus root is water, followed by starch. Starch is broken down into glucose in the human body, which is an energy source for life activities. It also contains oligosaccharides and dietary fiber that help the growth of useful intestinal bacteria and is also rich in vitamin C and potassium.

Lotus roots are available in Asian grocery stores, even in fresh, frozen, and ready-to-cook.

Have you ever had experience that you were lost how to deal with lots of carrots in refrigerator?

The Japanese often make Kinpira carrots to consume them as the Japanese “Mottainai” concept.

Japanese MOTTAINAI Aesthetic
"Mottainai" is one of the representative terms to refer to Japanese culture. It is commonly used daily when wasting food, things, money, time...everything when they have regrets to waste these values. You may know the meanings of "Mottainai" as environmental activities, so its spirit has been influenced across the world. But, what's the original meaning of "Mottainai"??? Today, I am going to tell you about Japanese Mottaianai sprit.

As the concept of Mottainai, we make Kinpira dish from Daikon radish skin.

It is savory when toss sesame seeds to finish Kinpira. The appearance is also appetizing, and the texture and aroma of sesame go well with root veggies.

There are black sesame, white sesame, and gold sesame, and the flavor and nutrition differ slightly depending on the color. Generally, White sesame is often used in Kinpira.

Japanese Sesame Seed Products Guide; Irigoma, Surigoma, Nerigoma
Sesame is often used in Japanese cooking. Roasted, ground, paste, and sesame oil, nutrition values are almost the same in the sesame products, but you can upgrade the taste of dishes when you use them properly depends on the dish. Roasted whole sesame gives you crunchy texture and strong flavor every bite, ground sesame has a strong flavor and aroma, a paste can be easily enhanced sesame flavor in dressing and soup. In this post, I will introduce all the popular sesame products in Japan.

japanmcconnell.com
Black And White Sesame seeds; Health benefits, How to use in Japanese Cooking
Sesame seeds are essential in Japanese cooking. It also gets attention as one of healthy grain, and the Japanese take advantage of sesame benefits! So, what's are the health benefits of sesame seeds, and are they different among black, white, and golden? Let's "open the sesame" with me!. 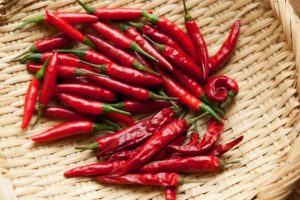 Takano tsume is a common red hot chili pepper in Japan which literally means a hawk’s claw because it looks like a hawk’s long claw.

In this case, it is not used as decoration, but it is cooked in with the ingredients from the beginning to add spiciness.

If you put in a whole piece, it will be modest spicy, and if you use slices, it will be quite spicy.
Removing seeds can help suppress spiciness, you can add seeds if you like very spicy.

As I said, the dish called Kinpira should be used “soy sauce” and “Sugar” are must-items. The minimum required seasonings for Kinpira are soy sauce, sugar, and Sake (or white wine.)

Speaking of Japanese food, you may wonder if mirin is also needed, but the raw materials of mirin are mainly sugar and alcohol which are commonly used to add sweetness, Umami, and shine to the dish.

However, mirin is not particularly necessary when it is difficult to get it, and there is no problem with traditional Japanese cuisine without mirin.

For home cooking, sake and sugar are enough to be substituted for Mirin.

Here is the example, homemade Teriyaki sauce without Mirin.

As you know, you can’t miss soy sauce in Asian cooking.

Soy sauce is essential for adding saltiness to Japanese cooking.
There is a wide variety of types, from the most common dark to light, low-sodium, and white dashi say sauce.
For Japanese cooking beginners, dark soy sauce such as Kikkoman is recommended.

There are many recipes that used low-sodium and white dashi soy sauce in the Kinpira dish, but you should start using them after getting used to the seasoning in Japanese home cooking.

White dashi soy sauce called “shiro dashi” or ‘Usukuchi” in Japanese. It is a light color, almost not looks like soy sauce, rich dashi flavor, and salty. It is used for dishes when you like to enhance or keep vivid colors of vegetables, so it is often used in Japanese restaurants. The sodium level is high in White dashi soy sauce, you may need to attend if you count it.

Kinpira is a stir-fried dish, so oil is also needed.
If you have a non-stick frying pan, you might think that you don’t need oil, but without oil, the ingredients tend to be dried, to get burnt, and they may lose their shape due to heat.

By coating with oil, it prevents scorching and shape loss, and also
it also gives a moderate luster and gives a perfect finish.

You can use your preferred oil, but, sesame oil is a trick to upgrade flavor in this dish.

Japanese sake in cooking can remove habits of ingredients such as meat and seafood, and also have a role to add mellow sweetness to the dish.
In Japan, cooking sake is relatively cheap and easy to get, but white wine can substitute instead.

Speaking of Japanese food, it has sweet and spicy seasoning and sugar is used frequently in Japanese cooking.

In general, refined whites are sweeter than unrefined browns.

Dashi is the basic of Japanese cuisine. It is the fondamtion of Umami taste and also enhance flavor of other ingredients. There are several kinds of flavor depends on raw materials such as kombu dashi kelp, bonito flakes, and dried fishes.

Following steps to make dashi, it’s going to be authentic and mellow rich taste, however, you can quickly get flavorful dishes by using instant dashi powder.

Ajinomoto’s “hon-dashi” is the standard dashi powder in most Japanese households, and it is not an exaggeration.

Dashi powder is absolutely not a must-item for Kinpira, but it can add richness and Umami easily to Kinpira.

If you think something is missing in your Kinpira or reduce the amount of soy sauce, add 1/2 teaspoon of Dashi powder.

If it’s not available, you can use chicken soup stock instead. Don’t put it more than 1/2 teaspoon because the dish will be too salty.

You May Wanna Read Next…

What's Hondashi Powder
Do you know how to use "HONDASHI" powder? Is HONDASHI powder is same as the dashi powder? -As you know, dashi is a key stock of most Japanese cooking. Simple gentle ingredients but flavorful. Typically, it's made from natural ingredients such as dried bonito, dashi kelp, dried fish, dried mushroom ... With Ajinomoto Hondashi, you can easily and instantly make real soup stock at home

It’s the carrot Kinpira recipe, but you can use other veggies (even you can mix several veggies) such as parsnips, Daikon radish, green beans.

Choose veggies that have less water contains while you are not used to stir-frying. 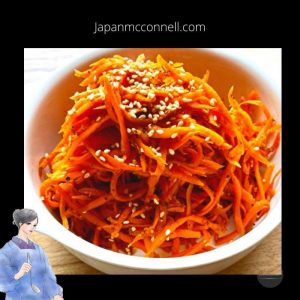 *Stir-fry for as short a time as possible to leave a crisp texture without watery. *As the taste shifts to the ingredients as it cools, wait for more seasoning. *When transferring to a container, let Kinpira cool first. If you put it in a container while it is hot, the steam may make it water and destroy the taste. *It will last for 5 days in the refrigerator.
Keyword sesame oil, sesame seeds, Vegetables

Kinpira is the comfort food for the Japanese and every family has its secret recipe.

If you are interested in Japanese home cooking, you definitely make the common side dish even you don’t need special ingredients.

Because of dark soy sauce with a rich strong taste, it can be not only as a side dish, but also as a nibble for beer, and a Bento lunch box.

How To Make Kanzake (Hot Sake) At Home; 4 Methods To Heat Up Sake And The Ultimate Guide Of A Sake Decanter