If you have been dreaming of Japan trip, you may have heard about

Japan is one of the countries where the usage credit card rate is low.

Well, it is kind of true but I would say it is almost not anymore when you travel to major sightseeing cities and major stores.

In my experiences, yes, my husband and I had troubles to use INTERNATIONAL credit cards many many times, even the many stores and taxies didn’t accept credit card payments 6, 7 years ago when we lived in Nagoya, Japan.

HOWEVER, in these 3 years or so, I don’t have problems using INTERNATIONAL credit cards and more places have been increased to accept credit cards.

As you see, there is a high possibility that you can’t pay with a credit card in private-own stores, local stores in small towns, and 100 yen stores.

In short, you need to bring a certain amount of cash with you during traveling in Japan.

One smart way is exchanging money before you leave for Japan, but I think it is not concerning to do so because you can withdraw money at first at the arriving airport.

International airports such as Haneda, Narita, Chubu Centrair (Nagoya), KIX (Osaka), and Fukuoka, Chitose (Sapporo), it shouldn’t have any problem to exchange or withdraw money.

The easiest way is just withdrawing Japanese currency at the arriving airport.

However, you may want to know where you can withdraw money in town after leaving airports, I can tell you 2 places where you will not have transaction problems in English. 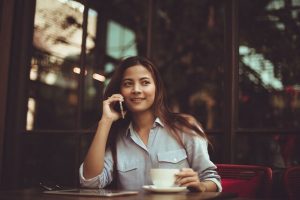 Tell your bank and credit card company your traveling plans.

It is a very important step to be able to withdraw money via ATM in Japan.

Banks do the best whatever they can to protect your account from spoofing.

When a transaction is found in a strange location, the bank may close it immediately. 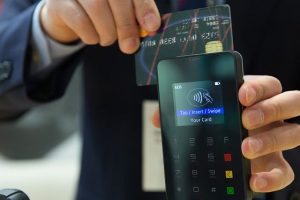 Especially if you travel in different countries included connection flights and use a credit card in each country shortly, the bank may close transactions from your account.

My husband has often this case in many years when he forgets notify banks,

it is pain sometimes he couldn’t contact the bank due to the time difference.

To avoid the worst situation,

Notify the bank about your trip before traveling. 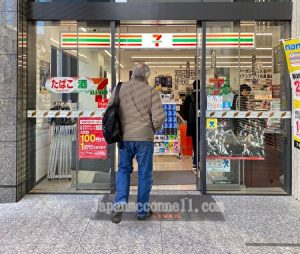 7-Eleven Convenience stores are highly recommended to use ATMs in Japan.

Since it is the lead convenience store has branch stores throughout Japan, you have less trouble to find one near you.

Not only convenience stores, “Seven Bank ATM” is located in some shopping malls, train stations, and airports.

Enter the store and find an ATM called “Seven Bank”. You can see a red-signed ATM mostly the corner in the store.

Most 7-Eleven stores are open 24 hours a day, seven days a week, and ATMs are open almost all day.

Honestly, we never use ATMs in other convenience stores such as “Family mart” and “Lawson”, but it will be enough to know you can withdraw money without any transaction problem at 7-eleven.

“Japan Post Bank” commonly called “Yucho”(ゆうちょ銀行) in Japan, is also another spot that you can withdraw money with international credit cards in English.

As its name, the Japanese national mail service company runs the banking service so you can find ATM machines inside post offices.

There are over 27,000 post offices throughout the country. VISA, Visaelectron, Plus, Mastercard, Maestro, Cirrus, American Express, JCB, China Unionpay, and Discover are available at ATM in Japan Post offices.

The ATM opening hours depend on each post office, it is hard to mention on this site but general opening hours are from 9:00 AM to 5:00 PM on weekdays.

To use ATM, almost same step with “Seven Bank” ATM,

I am sorry I am not sure, but I believe you need to select the language (English) before inserting your card.

You can find the English select button easily on the right side bottom.

The withdrawal limit per transaction is 50,000 yen, and also they charge the ATM service fee and your credit card international transaction fee.

In case your card cannot be used during opening hours, you need to contact the company issued in your country.

Probably there are more ways to withdraw money in Japan, but I think you will not have any issues when you use “7-eleven” and “Japan Post Bank”.

Especially, 7-eleven is much easy to find and friendly-use for overseas visitors.

Don’t forget to notify the bank about your traveling abroad. 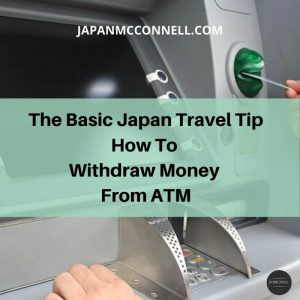 Prepare for Japan First Trip? Here’re some tips for planning.

The Useful Guide; 7 Tips Make Your First Japan Trip Perfect Before Leaving
Planning to travel to Japan? Is it your first time? Are you sure you are collecting the right information to make your first Japan trip perfect? I am a frequent traveler to Japan and I can tell what you need to prepare things before leaving with 7 tips.

japanmcconnell.com
What The Local Expert Is Saying Tips To Cut Budget For Japan Trip
Are you putting the Japan trip behind the basket list for your travel? Not only for Japan, but International travel is also sucking your cost. Luckily, I go back to Japan every year, and nop, cheap. But not so much different travel to Europe from the US, because I know how to cut the budget and use money smartly. I have lots of local real information that I want to share. Start saving money for the Japan trip today.

The worth season, worst season for traveling to Japan.

japanmcconnell.com
High Japan Travel Season, BUT You Will Miss Japanese Traditional & Cultural Experiences By NOT TRAVELLING In Those Seasons
Traveling to Japan? Do you know the Japanese high seasons? Cherry blossoms, sure. There are several high reasons that you have a hard time traveling around due to the crowd, and not so friendly for your budget. However, it will still worth seeing Japanese tradition, beauty and uniqueness in Japan. If you want to have authentic Japanese experiences, you should read this why you should travel to Japan even in high seasons.

The Useful Free Apps for traveling to Japan [2020 updated]
Want to know the latest best apps for traveling in Japan? I am going to tell you apps that you need to download for travel information, map & navigations, translation, taxi, safety alarm, and free wifi searching in Japan.

The Next Best App for Japan Travel

5 Things to do in TOYOTA city, Japan

How to get the cutest prepaid transportation card in Tokyo