One of the most famous comfort salad dishes in Japan is no doubt, potato salad which can be easily made at home and is delicious.

Yes, we have potato salad as same as the one in your culture.

Who doesn’t like the golden combination of starchy potatoes and Japanese savory mayo?

The ingredients between the Japanese version and your side version are pretty similar.

But they’re some differences in one way or another, the biggest difference is, Mayo, of course, can be the texture. The Japanese version is tangier, and also tends to include more vegetables and processed meat.

Mayonnaise is a key that you can say ” Japanese potato salad”, right?

You can easily find Japanese mayo such as Kewpie or Kenko at Asian grocery stores and on Amazon.

I am sure that you’ll be obsessed with Japanese Mayo once you taste it, so I recommend switching your traditional mayo to Kewpie (or Kenko).

However, you can still make Japanese-style mayo while adding mild vinegar.

Indeed, Duke’s mayonnaise is not a bad choice as a substitute for Japanese mayo.

Speaking of Japanese potato salad, it is often described as mashed, yes, potatoes should be fully mashed or half-mashed.

Besides, the Japanese prefer starchy potatoes rather than waxy potatoes so potato salad will be rich, starchy, creamy, and heavy salad.

When making Japanese potato salad, use starchy potatoes such as russet, Idaho, and Yukon gold potatoes.

How To Boil Potatoes In Japanese Cooking

After choosing starch potatoes, wash and rinse thoughtfully, and peel them.

As a restaurant-grade potato salad recipe, boil whole unpeeled potatoes, but, I prefer to peel and cut potatoes considering saving time and process.

I like half-mashed potato salad, so I cut potatoes in large sizes. However, you can slice them or cut them smaller when you want them to cook quickly or if you like the fully mashed ones.

Also, add 1 tsp of salt and boil them without a lid.

It generally takes 10-15 minutes to allow the potatoes to a boil, check out by porking a piece with the fork.

Immediately, drain the water and place the potatoes back in the pot.

Shake the pot on the hot stove top (you can turn on the stove) really fast and continuously to remove the moisture. Shaking the pot should be really fast since the potatoes will burn.

It is called “Kofuki Imo” in Japanese and this technique is often used in Japanese cooking to avoid soggy potatoes.

Since it is a simple classic Japanese potato salad recipe, let’s keep it simple: cucumbers, onions, and boiled eggs.

Another common cooking technique to remove moisture from sliced cucumber and sliced onions in Japanese cooking is salting.

In this recipe, soak sliced cucumbers and sliced onions together in salted water.

Squeeze the excess water out with your hands.

However, I skip them in my recipe. 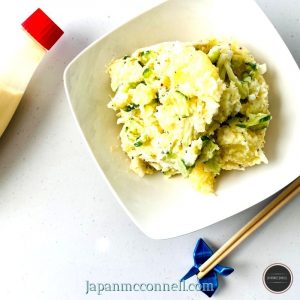 Simple Is The Best Classic Japanese Potato Salad With Egg

How Long Does Homemade Potato Salad Last In A Fridge?

It should last for 3-4 days in a fridge.

Since Japanese potato salad contains much moisture such as boiled potatoes, fresh cucumber, and onions, try to consume it within 3 days, especially during the summer season.

When keeping the potato salad at room temperature, consume it during the day.

If you want your potato salad to last longer, switch the raw ingredients to cooked ingredients such as carrots, green peas, and others.

Use Up Leftover Potato Salad

*JUMP TO THE RECIPE

Japanese fried potato cakes aka Korokke. One of the famous comfort food in Japan. A crispy Panko and savory natural sweet filling are delicious and addictive, often served as a main dish (!), Obento item, the filling for a sandwich, and Izakaya nibble. *TAKE A PEEK AT THE RECIPE

Sweet potatoes simmered with refreshing lemon slices often is served in vegetable side dishes, Obento items, and kaiseki cuisine in Japan. Generally, we use SATSUMAIMO, Japanese sweet potatoes, but, you can use regular sweet potatoes if it’s available. Soak sliced sweet potatoes in cold water after cutting because they’ll quickly turn black when exposed to air. Simmer the sweet potatoes over low heat for the savory sweet! sweet! potato dish. Store in the refrigerator and consume within 4-5 days. Lemon sweet potato leftovers can be turned into other dishes while mashing them to make sweet potato pie or casserole dishes. *TAKE A PEEK AT THE RECIPE

Japan Is The Mayonnaise Wonderland; Kewpie, Ajinomoto, Kenko, And More!