The Access to Shikoku region is quite easy from Osaka, Hyogo, Okayama, Hiroshima, and highly recommend to rent a car or use a bus trip tour offered by tourist agencies.

As you read my winter guides in Japan,

Shikoku region is not considered as the cold winter area because western Japan and on the Pacific side.

Let’s dive into what the winter like in each prefecture. 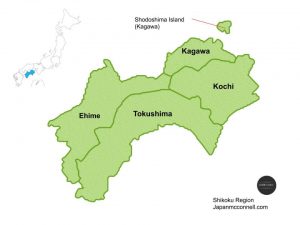 Have you ever heard of “Kagawa” Prefecture? Kagawa prefecture is definitely famous for local Udon noodles called “Sanuki Udon” and the smallest prefecture.

Not only Udon noodles, but Kagawa is also a great spot for art nerds.

Nao-jima island is known as the “Island of Art”. You can see various exhibitions related to art projects on the island. There are also pumpkin objects by Yayoi Kusama, who is famous for his dot works. The attractive spot in Naoshima is the Chichu Art Museum which designed by Tadao Ando. The works of three artists, Claude Monet, Walter de Maria, and James Turrell, are exhibited. The appearance of the works changes depending on when you visit- the natural light changes the works with time.

Searching the photogenic spot for Instagrams?

Kagawa is one of the only areas that produce olives in Japan, and Shodo-island is packed with the Mediterranean atmosphere. Many cute objects such as windmills, olive-colored posts, and large picture book objects are displayed, making it a popular photogenic spot for Instagram girls. It is also popular as the shooting spot of the live-action movie “Kiki’s Delivery Service.”

What To Wear In Kagawa’s Winter

The climate in Kochi is getting colder from December, however, it is a mild winter (I would say…)

It’s mild and not much temperature difference between the daytime and the night/early morning, yet, the lowest sometimes goes around 0 ℃.

The layer is a must, but you don’t need heavy-duty winter essentials.

Speaking of Kochi prefecture, Ryoma Sakamoto, the local food, bonito grilled bonito wrapped with straw, and Kochi Castle are famous. As the tourist attractions, you can enjoy the “Hirome Market” and “Sunday Market” in Kochi City. Also it is rich in great nature such as the Shimanto River. Kochi prefecture spreads from east to west. Must drive a car if you want to travel around the prefecture. There is the museum of figures and plastic models as the unique sightseeing spots.

What To Wear In Kochi’s Winter

Kochi prefecture doesn’t much snow, it rarely accumulates. However, in the mountains, it gets snow and cold. The road sometimes will be closed due to the snow and the icy road. If you drive a car beyond the Shikoku Mountains, better check the weather.
Outside of the mountain area, it relatively mild in winter, and the lowest is between 2-5 ℃. A light down jacket or winter coat should be fine as a jacket.

Tokushima is famous for Awa Odori and the world’s best whirlpools in the Naruto Strait,
It is full of sightseeing spots where you can enjoy beautiful nature, a quaint cityscape, and a human-powered ropeway! Yet, speaking of Tokushima, the Naruto Strait. Enjoy the powerful Naruto Strait by ​​attraction Boat “Uzushio”. You can see the whirlpools up close enough to be scared, there is no doubt that you will be thrilled and excited.

What To Wear In Tokushima’s Winter

The lowest is around 1-2 ℃, sometimes below freezing in the morning. Yet, Tokushima’s winter is also mild (I would say…)

There are many outdoor activities in Tokushima, bring thermal under wear when planning to go mountains and coast side.

Adjust the layer depends on how you feel.

Ehime prefecture is located in the northwestern part of Shikoku  island. Lots of histories in Ehime, even today, the prefecture has a variety of its own culture and dialect. The Seto Inland Sea side in the northern part is connected to Hiroshima with the “Setouchi Shimanami Kaido”, which makes it easy to access. Besides, cycling while stopping at the small islands in the Seto Inland Sea is a unique trip to Ehime. Matsuyama city, which is the most popular sightseeing city in Ehime includes Matsuyama Castle and Dogo Onsen.

What To Wear In Ehime’s Winter

The climate is mild throughout the prefecture. It sometimes gets snow in the mountains on the border with Kochi prefecture. In Matsuyama City, the lowest temperature rarely gets below freezing. But it gets under 5 ℃ in the morning, so pack a warm winter jacket enough for you.

Where To Visit In Winter Shikoku Region