The native guide; All about unique Japan google.com, pub-5441866818918003, DIRECT, f08c47fec0942fa0 Japanese Cooking Tips; How to get rid of fishy taste in shrimp before cooking | Japanmcconnell
Sponsored Link
Jump to Recipe Jump to Video Print Recipe

Japanese people are picky about seafood, and there are clever cooking tips to use its flavor.

The shrimp preparation is almost common sense for the Japanese, if you meet a Japanese who doesn’t know how to clean shrimps, he/she may be not good a cook. Haha.

If you are struggling to prepare shrimps, especially for removing fishy flavor, here’s a Japanese hack to remove that shrimp fishy smell and even unpleasant fishy aftertaste for a shrimp dish.

I do this every time we have Shrimp and it always works.

Make sure you have a potato or corn starch before starting! 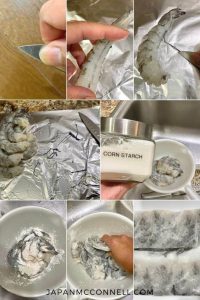 Why You Should Devein Shrimp? (Actually Not A Vein)

A vein referred to here is a thin, black (or blue) line on the underside of the shrimp.

The dark line that runs down the back of the shrimp isn’t really “a vein” although you call it deveining.

It is the intestinal tract of the shrimp.

Therefore, what the shrimp ate is digested and contained as body waste. (you know I mean.)

Since it also contains sand, and this is the cause of an unpleasant texture (actually you are chewing sand!) and fishy smell.

There’s no food-safety issue to removing the vein, however, I recommend to devein shrimps for these reasons.

What Is The Bottom Vein On The Shrimp?

Your shrimp may have another line on the ventral side.

It is the abdominal nerve cord, which is a bundle of nerves.

It is like the spinal cord in the human body.

It has nothing to do with a fishy taste and you don’t have to remove the bottom vein, but I will because it can get appetizing more.

Is It Easy to Devein A Shrimp With A Toothpick?

If you are a Japanese home cooking enthusiast, you may already know that the Japanese use a skewer or a toothpick to devein a shrimp.

Some people say it is the easiest and quick way to devein a shrimp.

Becccccccause it’s a pain in the neck!!!

Every time I try to use a toothpick to remove a vein, I have trouble finding the exact position to pull it perfectly without tearing off.

To me, using a knife is the easiest and quick way to devein shrimp.

Sharpen it every time before use.

How To Devein Shrimp With Shell On

How to devein shrimp when you want to use them with the shell on for such as garlic shrimp and paella?

You are OK to prep shrimp in the same way.

Make a notch on the back and remove the vein using a petit knife.

You can use a pair of kitchen scissors to make a notch on side of the shrimp shell as the easy way.

As an advanced hack to remove the fishy flavor from shrimp with shell on, pull off all legs.

(However, if you remove all legs in case of cooking smaller-sized shrimps, shells will be naturally peeled off while cleaning. Also, we can’t remove the bottom vein due to the shells on it.)

Moreover, Cut the tip called uropod diagonally and squeeze out the water inside using a knife.

Although you will peel shells after boiling for such shrimp cocktails, it is better to leave shells on and peel them after boiling.

Shells help shrimp meat will be shrunken, so removing shells after cooking can be better.

Besides, it is easy to peel them after boiling anyway because of making the notch for deveining. 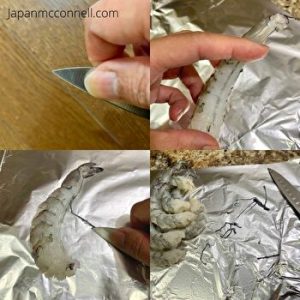 I use a piece of aluminum foil instead of a cutting board, so it is easy to clean the mess. Wrap the mess and throw it away.

*I am removing the bottom vein in the picture.

How To Clean Shrimp With Starch

As I said, cleaning shrimp with starch is almost Japanese common sense.

Sometimes, professionals and seafood cooking enthusiasts use only salt and Japanese Sake, but I like to use starch all the time.

How Starch Can Work For Cleaning Shrimp

The starch can remove invisible dirt and bacteria from shrimp because of the fine particle.

Potato starch is a common starch in Japan, but you can use corn starch instead.

You can use all-purpose flour. However, the starch can be easily removed when rinsing, contrary the flour sticks to the shrimp.

When cleaning shrimp with starch, you can feel shrimp are getting slimy and see the starch turning dirty, this is the cause of the fishy smell.

Besides, adding salt can remove the fishy smell inside of seafood using osmotic pressure and also make a fresh shrimp texture.

Steps To Clean Shrimp After Devein 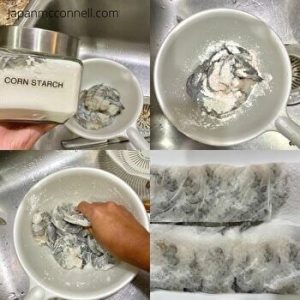 The Shrimp Recipe After The Perfect Preparation

How To Boil Raw Shrimp Perfectly Without Fishy Smell

In a large pot, add water and salt.

Bring the water to a boil, and add vinegar, and Japanese sake or dry white wine.

Do not try to cook shrimp fully in boiling water.

When shrimp start rising up in the boiling water in 2-4 minutes 1-3 minutes it is the sign to drain the water.

When you cook large-sized shrimp, it is the sign to drain when the tails are up or when a few shrimp start dancing with boiling water.

It really varies depending on the stove, the pot size, the types of shrimp, and the amount of shrimp.

Do not wait for all shrimp to rise up, and drain the shrimp quickly.

Avoid cooling them with ice or water since boiled Shrimp absorb excess water and will be a watery texture.

If you are not sure whether they are cooked or not, cut one of them and check inside a few minutes later.

If it is rawish, pour boiled water on shrimps or cook them for seconds to a minute.

I tried to summarize how to boil shrimp, but, it is the most important key to bringing the perfect boiled shrimp.

Eventually, I changed my mind to talk about the secret Japanese hacks to make the perfect boiled shrimp in this post.

To not waste your effort to clean shrimp, read thoughtfully this post to change your boiling shrimp! 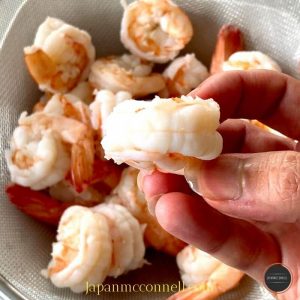 How To Devein, Clean, and Boil Shrimp PERFECTLY

Rico McConnell
Do you want to know how to get rid of the fishy taste in shrimp dishes? The most important process for removing the fishy taste before cooking is preparation, including deveining and cleaning the shrimp. I'll tell you the ultimate guide on how to thaw, prepare, and boil full of Japanese cooking tips! Let's get the best shrimp without a fishy taste, WITH fresh texture.
Print Recipe Pin Recipe

Thaw Frozen Shrimp Without Being Mushy

©Japanmcconnell/Rico McConnell- Content and photographs are copyright protected. Sharing this recipe is both encouraged and appreciated. Copying and/or pasting full recipes to any social media is strictly prohibited.
Keyword seafood, Shrimp, Tips & Hack