The native guide; All about unique Japan Reserve the seat for luggage on Shinkansen beginning May 2020 in Japan | Japanmcconnell
Home
Travel Guide
Sponsored Link

Do you know the new luggage rule of Shinkansen coming up in May of 2020?

Passengers who have over-sized luggage must reserve the seat which has the baggage space behind or on the deck.

Many foreign tourists don’t know about it, and troubles have been increased between tourists and other passengers.

For the temporary measure, the Central Japan Railway Company announced the new rule and will be fined in case you don’t follow the rule.

This is why you should know about luggage regulation to Shinkansen if you travel to Japan.

Reservation for the over-sized luggage

*In case all seats in the last row unavailable, you can book the special baggage storage on the deck. (you still have to book the space.)

*The seat with luggage space means seats in the last row and you can use the space behind seats.

All Shinkansen cars of JR Tokai Line don’t have baggage storages so far, and most foreign tourists really don’t know what to do. (The Japanese either!)

Therefore, they use the space in the last row or block the aisle, then other passengers have complained to the company.

The company got concerned about more tourists are visiting Japan for The 2020 Tokyo Olympics, so they made up the new rule for temporary measure until the coming the new design of Shinkansen car.

There are 32 seats with the luggage space in the last rows on Shinkansen car, and the company plan to create temporary baggage storages on the deck for the passengers who can’t get seats in the last rows.

Which Shinkansen lines are issued the new rule? 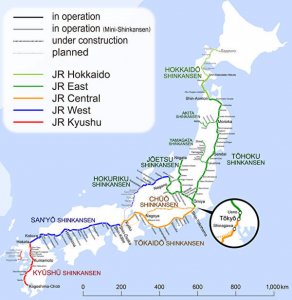 How big is called the over-sized luggage? 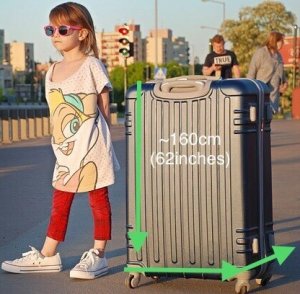 The total dimensions ( length, width, and depth ) are over 160 centimeters (62 inches).

This is mostly the same recognition as oversized baggage for *international flights. (depends on airline companies)

How to reserve the seat and the space? 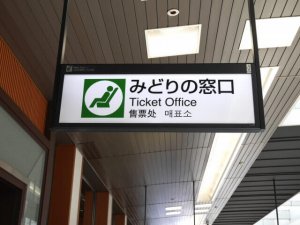 You can reserve a seat when you purchase the Shinkansen ticket at the ticket office called “Midori no Madoguchi” (みどりの窓口), travel service centers at stations or using a “smart EX” app.

Once you are at the ticket office, you will be asked the destination and the departure time that you like. Also, you need to tell the staff to reserve the seat with baggage space.

When Shinkansen was introduced as the main transportation system for the first time in Japan, the company didn’t expect passengers like international flight users. It was expected as the transportation for business people who wanted to save time for travel between Tokyo and Osaka back and forth.

Major users of Shinkansen were business travelers and domestic short-term tourists at that time, and “Boston bags” were used as typical travel bags in the 60s and ’70s of Japan.

This is the history why Shinkansen cars don’t equip with the big baggage storage.

• Types of Shinkansen that are equipped with baggage areas

On the other hand, the Central JR company is going to rebuild the current restrooms to baggage spaces partially by 2023. 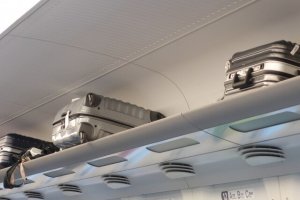 According to the company, we should put “carry-on bags” on the overhead shelf, or keep it in the legroom. Shouldn’t block the aisle because it is inconvenient to other passengers and the food cart.

Indeed, even among Japanese passengers, they have been discussed where we should hold large-sized luggage.

What the Japanese do today.

If you can’t get seats with the baggage space, you might want to think about sending luggage to the hotel or next destination by the delivery service company.

It is a not bad option because you can skip any annoying situation, such as reservation for the seat and haul around baggage in crowed, many steps and stairs in Japan.

How to send luggage to the hotel from the airport in Japan
NOT A MINIMALIST traveler? When you arrive in Japan, you can use the delivery service which is the best in the world! Just drop your suitcase at the airport and travel with hand-free! There are many stairs and people in Japan, so it will be much easier to walk around without hauling baggage. Moreover, most Shinkansen cars don't have baggage storage yet. You will be confused when you get on Shinkansen how to hold a suitcase. On this site, I will tell you about the delivery service at the airport.

My husband and I always send 2~3 large suitcases to the hotel from the airport and bring 1 large suitcase and 2 carry-on bags with us(and each backpack) to Shinkansen.

I ask the passenger if we can put our baggage behind the seat in the last row, and we put up 2 carry-on and backpacks on the overhead shelf.

If we have 2 suitcases, I put one in my legroom( I am tiny) and one in the space in the last row.

Our large suitcases are not over-sized according to JR company’s rule, but they are still big to hold in the legroom.

We talk about the new rule, and we might have to keep suitcases in our legroom or send 3 suitcases every time after May in 2020.

You can also reserve the seat and space even though your baggage is under 160cm (62inches) if you don’t want to keep it in the legroom.

I am sure it causes chaos when the new rule starts, hoping you read this and prepare the travel to Japan!! 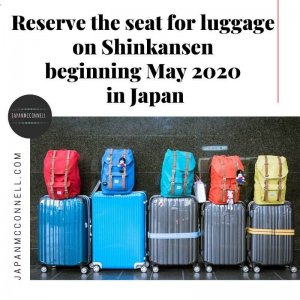 Another New Rule started In July 2020.

Bring Reusable Shopping Bags For Japan Trip; You Need To Pay For Plastic Bags At All Retail Stores Across Japan
...