Yamitsuki Cabbage is the popular Izakaya snack and easy appetizer at Yakiniku restaurants in Japan.

“Yamitsuki” literally means “be addictive to something” so Yamitsuki Cabbage makes you addicted to eating with its crunchy texture, aromatic toasted sesame oil, slightly salty, and healthy!

The perfect option when you need healthy snacks or late-night cravings.

Why is it so addictive?

As I said, because of high-quality toasted sesame oil and a little bit of mineral salt.

As you know, there are several types of cabbage, so you need to choose the right cabbage to eat fresh.

Ideally, the best cabbage to make “Yamitsuki cabbage” is “Japanese cabbage” often called Jaroma cabbage that you can see in oriental grocery stores which is a flat round shape.

The leaves are sweet and tender, the best cabbage to eat fresh, but also, sweetheart cabbage (called pointed cabbage) is also recommended.

Here is the list that you can get easily to make Yamitsuki cabbage.

How To Cut Cabbage

There is not much to say about cutting cabbage, basically cut bite-size in your style.

Just avoid cutting too small since the cabbage will be watery gradually.

Tearing leaves with fingers is a good way to prevent the dish from getting watery.

When using Napa cabbage, shred napa cabbage instead of cutting pieces since it slightly has habits.

Use A Good Salt

Salt has a variety of colors and textures to enhance the flavor of your dishes and make them more savory.

Especially, this dish is used supreme simple ingredients, yes, raw cabbage, choose one of the best salt with healthy and tasty.

Some salts such as pink Himalayan salt and other different types of natural sea salt are considered tastier and healthier (means contain minerals ) compared with regular table salt.

Guérande’s salt, which is made by drawing seawater into the salt pans using tides and slowly crystallizing it only by the natural power, is harvested by humans.

Small, mineral-rich salt. The minerals in the salt add the flavor richer and deeper.

It gets you once you bite the crystals and impacts the taste with a natural mineral taste, but the aftertaste is gentle and elegant. It is recommended to sprinkle on the salad finish so that you can enjoy the saltiness and crispy texture.

Okinawa sea salt is known for its high quality and natural handmade produce (some of the products.)

Because the manufacturing process with cast iron is rich in iron.
The natural hand-harvested salt from a beautiful island in Okinawa gives any dish a rich flavor.

Compared to ordinary salt, the salt concentration is higher, only a pinch of salt can impact the dish.
Yet, it’s the mild aftertaste.

It’s one of the best sea salt worth trying and you can’t get back a regular salt.

As well as the mineral salt, let’s upgrade your dusty and sticky toast sesame oil in your kitchen or never opened.

Yamituski cabbage is almost determined whether tasty or not depends on the toasted sesame oil.

Toasted sesame oil is known for its aroma that makes you hungry all the time you smell it, besides, it is known as one of the healthy oil.

Sesame oil is rich in unsaturated butyric acid, such as the essential fatty acid linoleic acid, and also contains sesamin and vitamin E, which are high in antioxidants.

This is the best sesame oil so far in my life!

I couldn’t forget my impression when I tasted this first, with its rich elegant aroma and flavor.

100% pure sesame oil, you will notice the gorgeous dark roasted color more than any sesame oil first when you pour it into the plate.

This is the most popular sesame oil produced by Kadoya Sesame Mill in Japan, a cooking oil company founded in 1858.

It has a rich sesame flavor yet a mild clear aftertaste. You can use it for any dish as cooking oil or dressing oil.

Carefully selected sesame is roasted without changing the original process for 160 years. Recommended as sesame oil for everyday use.

While you can enjoy this simple vegetable snack as simple as it is, you can twist the seasonings to make it more flavorful.

I recommend adding more seasonings when using cannonball cabbage (green cabbage) since it is not sweet as Jaroma cabbage or sweetheart cabbage.

Note: Use chicken bouillon powder instead of salt.

Looking for the weird Japanese flavor?

I don’t want to describe it as “weird” because it is not “weird” / “unique” to me at all, sadly, I understand it looks weird black seaweed thing to you.

“Shio kombu” is a staple Japanese condiment or topping made from kelp cooked with soy sauce, mirin, and sugar.

It does not taste like Nori or seaweed salad, It’s sweet and salty (that everyone is craving, right/) with less seaweed flavor.

Shio konbu goes well, especially with rice, indeed, you can find easily it as the filling of rice balls in Japan.

Since Kombu is rich in minerals and amino acids which means it is packed with Umami flavor, just adding shio-kombu can make the simple taste dish savory.

“Kombu Dashi Powder” is instant Kombu Dashi which can bring a delicate and gentle Umami flavor.

Add 1 tsp of Kombu dashi powder instead of salt.

It is a handy item for Japanese home cooking for not only soup but also it can be used as condiments.

If you like to add authentic Japanese dashi flavor to Yamitsuki cabbage, it can work well easily and quickly.

It is not the Kombucha that you know as a healthy drink.

Japanese kombucha (kobucha) is literally translated as Kelp tea, but it is not also a tea drink like enjoy with sweets tin he tea time.

So what is Kombucha?!

It is made of dried kombu (kelp) powder and sometimes flavored with salt, Umeboshi, or Arare small rice crackers.

We commonly drink it as after-meal tea or after-drink tea.

Not only as a comfort drink, but the Japanese also use it as condiments as well as Kombu dashi powder.

Add 1 tsp of Kombucha instead of salt. 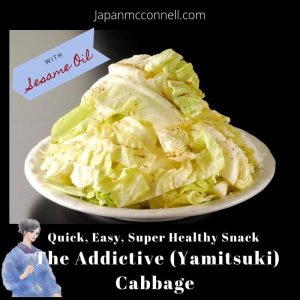 How To Turn Yamitsuki Cabbage Leftover Into Asazuke Pickles

If you have Yamituki Cabbage leftover, (I am sure it’s watery,) let’s turn it into Japanese ASAZUKE pickles to enjoy for more few days!

Put Yamitsuki cabbage (with any variation of seasonings) in a food stock bag, and add another 1 TSP of salt.

Store it in a fridge for anytime between 30 minutes to overnight.

Serve the Asazuke cabbage after draining the water.

Consume it within 3 days.

Add other vegetables such as sliced cucumber and carrots if desired.