The south is warm. The global theory is considered a useful measure when planning a winter vacation plan to escape the cold.

Is it so? If you believe in the theory, you may regret traveling without winter essentials. Read this post, learn the climate of Kyushu so that you don’t get frozen. 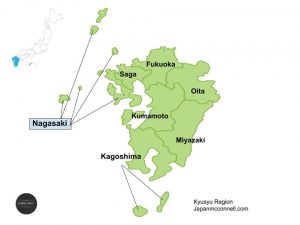 The Overview Of Climate Regionally In Kyushu 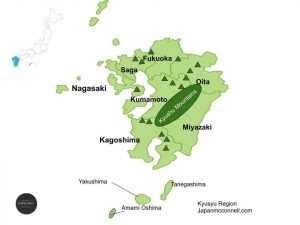 Except for Okinawa, the Kyushu region is considered the warmest region in Japan after the Ogasawara Islands, Tokyo.

However, the wintery climate differs (a lot) throughout the island. For example, the winter in the islands north of Tanegashima and Yakushima is cold like other cold weather on the main island, and even it snows.

Amami Oshima, located between Kyushu and Okinawa in the southern part of Kagoshima Prefecture, has a lot of rain. The annual temperature is less different and it is warm all year round. The winter is mostly cloudy and rainy.

Snowfall is common in the mountainous areas of Northern Kyushu, such as the Aso area in Kumamoto prefecture, western Oita prefecture, and northern Miyazaki prefecture. However, there is no “heavy snowfall area” because the temperature is relatively warm.

Also, In plains in the northern Kyushu region, it’s often overcast, and it gets often snow.

In the southern parts of Oita, Miyazaki, Kagoshima, and Tanegashima & Yakushima region, which face the Pacific coast, the winter climate is warm, and rarely snow and less rain. On the other hand, it’s mostly the clear days in the northern and central Oita prefecture.

When it snows in Fukuoka City, even a snowfall of about 5 cm (1.9 inches) is considered as “heavy snow,” and the traffic and the transportation network will be confused like in big cities such as Tokyo, Yokohama, Nagoya, Kyoto, and Osaka.

Surprisingly, Northern Kyushu is As Cold As Osaka

The biggest characteristic of the weather in NORTHERN Kyushu is that it is almost the same as the Kansai regions.

Looking at the average temperature of each prefecture compiled by myself referring to Japan Meteorological Agency, in January, Osaka was 6.9 ° C, while Fukuoka was 7.4 ° C, Saga was 6.6 ° C, Nagasaki was 7.5 ° C, and Kumamoto was 6.5 ° C, they are about the same as in Osaka. (even some places are colder!)

The average temperature in Okinawa, January is 18.1 ℃, which is very warm considered as just a number (indeed, the real-feel temperature is colder because of the wind). Therefore, it is quite wrong to say “tropical Japan” to combine Okinawa and Northern Kyushu.

*The average temperature is calculated from the data from 2017 to 2020 of the Japan Meteorological Agency.

Also, Kyushu has many snow days against the “south is warm” theory. Looking at the data from the Japan Meteorological Agency for the past 30 years, Fukuoka Prefecture has nearly twice as many snowy days as Tokyo.

Is Southern Kyushu A Tropical Island?

On the other hand, southern Kyushu is known as warmer winter, so Miyazaki Prefecture is also famous as a baseball campground. The average temperature in January is 8.5 ° C in Miyazaki and 9.3 ° C in Kagoshima. In February, it is 7.1 ° C in Osaka, while it is 9.2 ° C in Miyazaki, thus, the difference is remarkable.

Yet, it is definitely colder than Okinawa, and also I will talk about it later, but it depends on the region, it can be cold in Kagoshima prefecture, so you can’t walk around the outfit like you are traveling on a tropical island-short sleeve T-shirt and short-pants.

Southern Kyushu has a tropical atmosphere like palm trees and white sand beaches along the street, but it often snows. The cold air that flows in due to the pressure distribution in winter changes to moist air due to the water vapor generated from the sea surface, making it easier for the snow to fall.

Therefore, if you are planning a trip to Southern Kyushu in the winter, you need to consider the possibility of snow. Checking weather information is essential, as heavy snow can have a significant impact on traffic and can ruin your itinerary.

The Tricky Weather in Kyushu

I talked about that the average temperature in Northern Kyushu is almost the same as Osaka and Southern Kyushu is relatively warm(er), but these all are about the CITYSIDE.

If you are planning a trip to the mountain areas, you need heavy-duty winter essentials.

For example, let’s see Yufuin Onsen town. It is a town in Oita prefecture considered a warmer winter place because it faces the Seto Inland Sea. However, the Yufuin Onsen town is cold in winter. The same as Kurokawa Onsen town, in Kumamoto prefecture, is also snow in the winter is normal.

The temperature in the mountain areas is not stable during the wintertime until early spring, and it also often gets snow. Even if the place you are staying is sunny, there can be snow piled up in the mountains, check the weather information of your destination before leaving.

Then, Where Is The Warm Place In Kyushu’s Winter?

Roughly speaking, Southern Kyushu and south of Kyushu Mountains, especially, the plain facing the Pacific ocean in Miyazaki prefecture and the south of Satsuma peninsula in Kagoshima prefecture is a relatively warm place to escape cold Japan’s winter.

Amami Oshima is definitely warm like in Okinawa prefecture.

In Northern Kyushu, it could be Nagasaki prefecture.

Since Nagasaki Prefecture is located at the northwestern tip of Kyushu, it has an oceanic climate that is generally warm and has a small temperature difference due to the influence of the warm Tsushima Current from the East China Sea.

Yet, it is cold in the western offshore islands such as Iki and Tsushima and the mountains. If you are looking for a mild winter, visit northern cities in Nagasaki and Shimabara Peninsula.

Warmer Places In Japan; The Weather Guide For Winter Wimps
Insider tips To help winter wimps find the locale that best suits your winter vacation where you can avoid freak-out coldness and snow chaos which can ruin your itinerary. Looking for a warm winter destination in Japan can be hard; if you think it is cold below 10 ℃/50 F even in the daytime, Japan's winter is cold except for a few places. Read this post and determine whether you want to visit Japan in winter or compromise to visit those warmer places in this post.

It also lots of rain, you need to pack winter essentials and also consider for the rain.

There are many hot springs and other attractions in Kyushu, especially local foods and Shochu are great. Rich nature and great people. Lots of beautiful places to go.

Be sure to pack the basic winter essentials even if planning to travel to the south island, Kyushu in Japan. When visiting the mountains and hot springs, make sure to dress warmly. Check the weather information carefully especially when planning to travel by car.

Japan Driving Rules; 16 Things You Should Know About
Understand the important Japanese traffic rules and regulations. In Japan, you must be over 18 years old and need requirements to drive a car in Japan during yo...

japanmcconnell.com
[Driving in Japan] Do You Know What The STOP Sign Is Like In Japan?
As the number of overseas travelers enjoying road trips in Japan increases, so does the number of car accidents. One of the main causes is the misunderstanding of the Japanese stop sign. Why? It because the Japanese stop sign looks like "Yield" and "Give way" signs in your country. In the worst case, it can lose someone's life. In this post, I will introduce what Japanese stop signs look like and related topics that help your safety drive in Japan.

[2020] Get Information About Narita Anime Deck & Road in 20 pictures