Thousands of these culturally significant instant noodle products in Japan have dramatically improved flavors and styles since Momofuku Ando created instant noodles in 1958.

Not only in Japan, but they’ve also been booming worldwide as another cool Japanese culture.

Try non-fired stick instant ramen noodles called “Boh ramen” in Japanese to get inspired!
It almost drags you into the kitchen rather than going out to ramen shops.

You’ll be blown away by the flavor of the broth and the richness of the noodles!

Instant noodles produced by Marutai Co., Ltd., headquartered in Fukuoka Prefecture, Japan, have been loved for over 60 years, especially in the Kyushu area.

The official name is “Marutai Ramen”, but it is called “Boh Ramen” (Boh means bars/ sticks in Japanese).

The year when Marutai ramen was released is after the world’s first instant noodle “Chicken Ramen” (Nissin Foods) was released.

Since Marutai Boh Ramen doesn’t take up space and is easy to cook, so it has been popular as a camping/ hiking/ outdoor meal.

The soup is based on chicken and pork and is flavored with soy sauce.

Compared with Tonkotsu soup, the soup is literally light, mild, and gentle to the stomach.

The non-fried noodles per serving are 258 kcal and the soup is 22 kcal, so they are low in calories compared to other instant noodles.

Therefore, it is also attractive that you do not have to worry too much about calories even if you add arrangements. 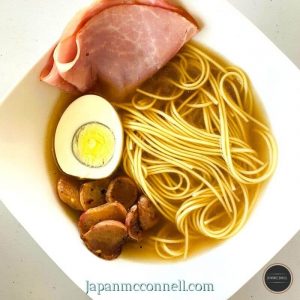 How To Make Marutai Boh Ramen

Flying fish is locally called “Ago” in Nagasaki, and the soup in “Ago-Dashi Ramen” is made of dried flying fish.

The flavored oil is a blend of beef oil and sesame oil, which enhances the flavor of the soup.

The soup is based on the Tonkotsu soup, but it has the unique scent of Kurume ramen and is finished with a sweet and rich Tonkotsu soup that emphasizes the taste of pork, and pork bones, adding onions, ginger, and soup.

*It’s the strong rich pork bone broth flavor, you can adjust the flavor with the amount of oil.

Although there are minor differences from one ramen shop to another, the main feature of Kurume ramen is,

Yet, Hakata ramen is the most popular Tonkotsu ramen in Japan, which is the local ramen in the Hakata area, Fukuoka.

Nagahama ramen is also the local ramen from the Nagahama area, Fukuoka.

Compared to Hakata Ramen, Nagahama Ramen has richer Tonkotsu soup. The soup will be firmly entwined with the thin noodles becomes addictive once you eat.

The soup is made from Kagoshima black pork, which is packed with rich savory flavor with natural sweetness from vegetables.

This product contains “browned green onions,” which is one of the characteristics of Kagoshima ramen.

Miyazaki ramen is a Hakata ramen family, and the soup is Tonkotsu, but it’s a lighter and mild pork bone taste.

The noodles are often thick, soft noodles with high water content. Garlic soy sauce may be added to the soup depending on the ramen shops. Interestingly, Takuan is served as the side.

Marutai Miyazaki Ramen-Style Spicy ramen noodle is the Shoyu-ramen but is based on Tonkotsu soup.

Kumamoto ramen is the local ramen in Kumamoto, which has the Tonkotus-based soup but adds chicken soup hints.

Much lighter and milder taste compared with authentic Tonkotsu ramens such as Hakata and Kurume Ramen.

The most feature is browned garlic topping, so you may want to consider eating this ramen for your romantic date.

The soup is based on chicken broth and adds Ksyushu-proud local sweet soy sauce.

Yuzu powder from Oita prefecture is included in the packet.

Please check out topping ideas for Kyushu ramen in this post.

Umeboshi Plums 101: Health Benefits, How To Eat, How To Make Iconic Japanese TSUKEMONO