I talk about all about sesame seeds from the point of the Japanese, because Japan is one of countries that most import sesame seeds and in fact, we use them a lot in Japanese cooking.

In Japan, white, black and golden sesame seeds are common and several sesame oils are avairable in each kind of sesame seeds.

Moreover, there are types of sesame seed products, and we use them in diffrent way to different dishes.

There are some theories that you better use a proper item in each cooking.

Today, I am going to tell you types of sesame seed products in Japan and how to use them in Japanese home cooking.

It is said that there are about 3000 varieties of sesame, which can be roughly divided into three types by color. There is not much difference in nutritional value between them, but if you change the usage according to the characteristics of aroma and color, you can improve and enhance the tasty dishes.

In addition to mineral components such as calcium, magnesium, and iron, sesame contains vitamin E, which has an antioxidant effect, and sesame lignan, which suppresses the activity of active oxygen and lowers cholesterol, and is an effective ingredient for anti-aging.

Black And White Sesame seeds; Health benefits, How to use in Japanese Cooking
Sesame seeds are essential in Japanese cooking. It also gets attention as one of healthy grain, and the Japanese take advantage of sesame benefits! So, what's are the health benefits of sesame seeds, and are they different among black, white, and golden? Let's "open the sesame" with me!.

Sesame products include “roasted” sesame, “ground” sesame, “sesame paste” and “pressed oil”. The nutrients in these products are very similar.

But, the absorption of nutrients to the body is dependent on whether or no seeds are hulled or not.

When choosing sesame seeds, select seeds that are plumpy, rounded, and the same color as possible as you can find. Store sesame in the sealable bottle or jar and keep it in the refrigerator to keep it last longer. it will last a long time. However, sesame seeds are easy to oxidize unlike sesame oil, so use them up as soon as possible. 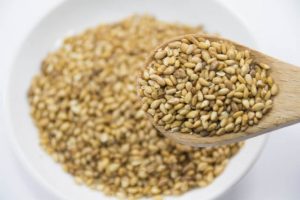 “Irigoma” is just roasting sesame seeds as themself, so you can feel and enjoy texture and flavor spark out every time you chew them.

Commercially available roasted sesame seeds are made by washing raw sesame seeds and roasting them, but the toasty aroma will be revival when roasting again, and it will be even more delicious.

“Grounded sesame seeds” called “Suri-Goma” in Japanese are the product that sesame seeds are roasted and then ground and there are two types of Suri-Goma- hulled or not.

The most appealing point of surigoma is its rich aroma.

By milling hard skins, the nutty aroma becomes stronger and also are easy to digest. Therefore, it is beneficial in nutrition absorption rather than roasted sesame seeds.

In Japan, it’s easy to get commercial grounded sesame seeds but of course, they can be homemade easily with tools. 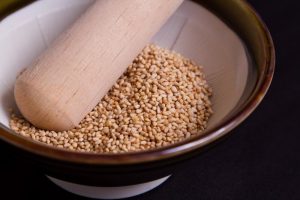 Suribachi & Surikogi are traditional Japanese mortar & pestle. It can be used for mainly grinding sesame seeds.

Mino ware is local pottery in the Mino region, Gifu, Japan. Its history is long but Mino ware designs are so flexible and easy to make a flow in your kitchen beyond culture. The changing glaze, shapes, and designs depend on the trend are the characteristics of Mino ware.

The Mino region became now the term of the region in Gifu, and Mino city is one of the main cities and also the place to see in the area. As well as Mino ware, Mino Washi paper is the traditional product selected in the national traditional craft in Japan.

Things To Do In Mino City, Gifu, Japan; The Memorable, Peaceful, Historical Town
Things to do in Gifu? Visit Mino city located in the center of Gifu surrounded by great nature. The city is famous for Mino Washi Paper selected in UNESCO intangible cultural heritage. Stroll around "Udatsu no Agaru" historical district, get relaxation from soft warm lantern lights made of Mino washi paper. Stylish cafe, Kawaii Mino washi shopping, and great views from the hill.

Kiso hinoki– Kiso Hinoki cypress refers to the cypress naturally grown in the forest area over the Kiso area in Gifu prefecture, Nagano prefecture. Most trees are over 300 years old and have known for excellence in materials. By the way, the natural forest where Kiso Hinoki, Akita Sugi, and Aomori Hiba grow is called “Japan’s Three Great Forests”.

5 Things You Should Know About Hinoki Cypress; Hinoki Benefits And The relationship With The Japanese Life
Japanese Hinoki cypress has been deeply rooted in Japanese culture and soul. Most Japanese feel unconsciously being relaxed when smelling its scent. There is the reason. Hinoki cypress has natural relaxation power. Moreover, it has antibacterial, insect repelling, and deodorant effects. In Japanese history, you can see old shrines and temples built with Hinoki wood in Japan. In this post, I will share the natural power of the Hinoki cypress and how it relates to the Japanese lifestyle. 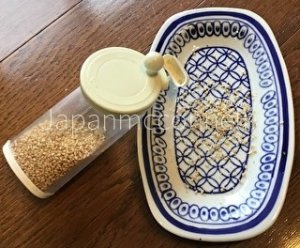 The best thing about this item is that you can adjust the amount of seeds you grind. It is also convenient to toss the ground sesame seeds directly on the dish.

I got this at Daiso in Japan but here is a similar item on Amazon.

You can put sesame seeds in the strong bag (freezer bag) and press them on the bag with a rolling pin.

“Japanese sesame paste” is made by removing grains from sesame seeds and kneading them until they become a paste.

“Neri-Goma”, which can be often found in Oriental grocery stores. It is made of 100% sesame seeds.

The Japanese sesame paste can be used for any kind of dish, and generally, “sesame dressing” is the most representative use.

Not only a salad, but sesame dressing also goes well with a grilled dish and Japanese hot pot. If you have “ponzu” sauce in a refrigerator, sesame dressing is easy to make at home.

Classic Japanese Karaage Chicken Recipe: How To Make It Crispy
The classic Karaage Chicken recipe- everyone can make Japanese-style fried chicken at home. Crispy and juicy, it's sure to be a family favorite. Despite there's no need for a long marinade in buttermilk like classic fried chicken, yet, I recommend marinating the chicken in buttermilk, Shio-koji, or the baking powder solution, especially when using chicken breast meat. The two-step coating process can bring the best crispy Karaage chicken, besides using cake flour instead of all-purpose flour. (and mix starch.)

japanmcconnell.com
[Edited] Super Crispy Japanese Karaage Chicken Recipe 2: The Rice Flour Magic
LEARN HOW TO MAKE CRISPY AUTHENTIC JAPANESE FRIED CHICKEN (THIGHS)! This is the one of Karaage chicken that's perfect for those who love authentic Karaage chicken (without sauce) and for those who love crispy juicy fried chicken. Gather around my friends. It’s time to tuck into some serious Japanese-style soul food. You're going to love how crispy and flavorful Japanese KARAAGE CHICKEN is! Marinate chicken in soy sauce-based seasonings, and coat them with rice flour. Fry coated chicken at 320F, and double-dry them at 350F.

By the way, the difference between “Tahini” and “Neri-Goma, the Japanese sesame paste” is whether sesame seeds as raw material are roasted or not.

Your Pantry On Amazon

How To Store The Japanese Sesame Paste

Keep it in the same container when it was purchased. After opening, clean the edge of the container and seal it with the lid.

Storage in a cool place without direct sunlight. You do not need to put it in the refrigerator as the oil in the sesame may harden white.

The sesame seeds may separate into liquid and paste. The liquid is the oil from the sesame seeds you don’t have to throw it away. Just mix well until it becomes a paste.

If the paste hardens and is difficult to mix, soak the jar in a bowl filled with boiled water. Make sure not to put water inside of the jar.

Add A Little Sesame Into Your Healthy Meal

Sesame seed products can support your daily meal in a healthy and tasty way!

Irigoma, roasted sesame seeds, you can enjoy its texture. Surigoma, ground sesame seeds, brings you easy digestion and the effective absorption of nutrition, and you can impress your family and guests with sesame dressing when keeping Japanese sesame paste in your pantry!

Since the aroma is an important ingredient, please try to use it as soon as possible in a fresh state and use sesame in your daily cooking.