The Japanese-style pork cutlet is called Tonkatsu, which is breaded with panko breadcrumbs and deep-fried in oil.

Tonkatsu is a very popular dish in Japan and is often found on the menus of restaurants from western-style to Japanese style, family restaurants, convenience stores, in Bento lunch boxes, and monthly family dinners at home.

Typically, served with a savory tonkatsu sauce (known for bulldog sauce in the US) and shredded sweet green cabbage.

Crispy Panko breadcrumbs and juicy pork is no doubt about satisfying your family’s appetite and savory sweet-tangy tonkatsu sauce are so addictive.

This pork cutlet is made with simple ingredients even though it’s Japanese style.

You can easily find everything you need to make in your local grocery.

What Part Of Pork Is Best For Tonkatsu?

Make Japanese pork cutlets, you can use either pork loin or tenderloin.

A thick band of fat along one side of the meat, which, the fat bring the dish very juicy.

I like fatty parts so I normally don’t trim them, but you can trim them if desired.

Also, I highly recommend marinating pork loin/ tenderloin meat with shio koji or the baking powder solution to tenderize and moisturize them.

So you can use Italian-style bread crumbs for “Tonkatsu”???

Well, I would say…you can, but it is just not an authentic Japanese-style pork cutlet.

You can buy “Panko” as the Japanese style bread crumbs at a grocery store easily, so why not???

So why Panko bread crumbs are so popular???

Bread crumbs, as the name implies, are made by baking, crushing, and sieving bread.
Raw materials include wheat flour, yeast, salt, sugar, fats and oils, yeast foods, and additives.

Japanese Panko bread crumbs aren’t seasoned like Italian style and are also not a small particle, which gives you a flakier, airier, crunchy texture.

Fresh bread crumbs have more water content, so give a nice airy soft but crunchy texture.

When the water in the panko evaporates making holes that make it crispier and airier texture.

It also prevents the deep-fried pork from over-frying (so avoiding the meat from drying out).

For the best result to make Japanese-style pork cutlet, fresh bread crumbs is better, but you can get the same result to spray water on dried Panko.

You don’t have time to make sauce???

Tonkatsu is served with a savory tonkatsu sauce that is available in bottles at Asian grocery stores.

Bull Dog Tonkatsu Sauce is definitely the most popular brand.

You can use other Japanese dishes such as Yakisoba noodles, Yaki udon.

For Nagoya-style, it is called “Miso katsu” which is served with sweet red miso sauce.

How To Make Tonkatsu Pork Cutlet

Actually, it’s not a complicated recipe for Japanese Tonkatsu.

So simple and delicious.

Yet, here are some tips to make the Japanese Tonkatsu cutlet more tender, juicy, and crispier!

Pork loin has chewy parts between the meat and the fatty part.

To prevent warping and shrinking the meat, cut the muscle fibers before cooking.

To tenderize the meat, pierce the meat all over with a fork or use a meat tenderizer as much as you can.

Lightly pound meat if needed, but don’t make it thinner. (It’s not schnitzel.)

As I said, I highly recommend marinating the meat with the baking powder solution or shio-koji overnight for a better result.

Especially, marinating shio-koji can not only tenderize but also bring Umami and savory-sweet flavor.

When preparing a pork tenderloin, trim off any excess fat and the silverskin.

Slice up 1.5 inches and pound lightly.

You can use batter instead of dredging.

Always, it’s better to use plenty of oil for deep-frying rather than pan-fry with 1.5-2 inch oil.

Deep fry the pork cutlet to a golden brown.

When you see bubbles get smaller it means done.

Place the deep-fried pork on the wire rack to drip off excess oil.

How To Store The Pork Cutlet

This dish will keep in the refrigerator for up to a few days.

You can also freeze pork, individually wrapped then stored in a freezer bag.

If your cutlet will not get crispy, you can cook the pork cutlet with an egg and Japanese sweet Dashi broth which is called “Katsuni”.

The dish that Katsuni on rice is called “Katsu Don” 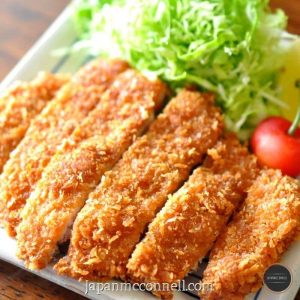 MISOZUKE: How To Make Japanese Pickles With Miso

How To Keep Leafy Vegetables Fresh Longer In My Fridge: Will Stay Fresh Up To 3 Weeks!?