The native guide; All about unique Japan Japanese Pickles With Shio Koji Is An Easy And Healthy Idea For Vegetable Side Dish | Japanmcconnell
Sponsored Link
Jump to Recipe Print Recipe

Another Winning Recipe! This Is An Easy And Healthy Idea For Vegetable Side Dish In A Personal Tone:

If you’re looking for a tasty way to get more vegetables into your diet, you need to look no further than this simple, easy-to-make dish that can be made.

Your vegetable side dish doesn’t have to be a hassle. Enjoy the benefits of pickles with shio koji!

Why KOJI Zuke Has The Full Of Umami Flavor

Japanese pickles called “TSUKEMONO” are one of the soul food of the Japanese.

SHIO KOJI ZUKE has been attending for its rich Umami and nutritious value among TUSKEMONO.

The secret key is in the “enzyme” and “lactic acid bacteria” brought by shio koji.

The enzymes produced by shio koji break down the fibers, sugars, and starches in vegetables and transform them into umami, making pickled vegetables extremely delicious.

Kojizuke pickles are one of the excellent “overnight tsukemono” that can be quickly delicious because of the koji mold.

Tenderize The Meat With Koji

Since the shio koji breaks down the fibers and sugar while producing full of umami flavor such as amino, it is also popular as the tenderizer for meat.

2 Ways To Remove Moisture From Veggies

Removing moisture from vegetables that you want to make TSUKEMONO Japanese pickles is essential to making tasty TSUKEMONO, outside of ASAZUKE.

By removing the moisture from veggies,

There are two ways to remove the moisture,

Use Salt To Remove The Moisture

Simply, sprinkle 1.5% salt on the total weight of vegetables.

Let it sit for 10 minutes, and squeeze the moisture out with your hands.

How To Draw Excess Water From Vegetables

By drying vegetables in the sun for a few hours to a half day, they will turn to be delicious TSUKEMONO with a unique crunchy texture. 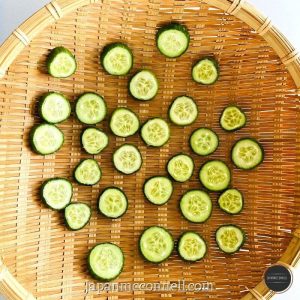 How To Make Semi-Dried Cucumber

Rico McConnell
Eating semi-dried cucumbers is a great option for people looking for unique recipes, a natural lifestyle, or trying to reduce food loss, even for vegetarians and vegans. You can dry them in the sun just for half day. The semi-dried cucumber will be greatly sweeter and has a unique crunchy texture.
Print Recipe Pin Recipe

To learn about drying vegetables, please check out this post!

Shio koji is a traditional Japanese fermented condiment, which is often used for marinating and tenderizing while enhancing the umami flavor in foods, or simply used as a substitute for salt or soy sauce.

Besides, fermented food can’t be missed for a healthy lifestyle- Eating fermented foods is not only tasty but can contribute to overall health.

Check out this post for more Shio koji guides and also to make homemade Shio-koji.

You can make homemade Shio Koji from scratch, actually, it’s easy to make, or you get a shio koji product on Amazon, or at popular oriental grocery stores.

It’s perfect for using up the veggies leftovers refrigerator. Once you make koji zuke pickles, they can be stored for 3-4 days in the fridge.

Since the shio koji makes the pickles a little sweeter, you can drizzle a little soy sauce or roasted sesame oil when serving.

You can also make a Japanese-style salad by mixing fragrantly grilled tofu and leafy greens.

It’s gonna be a super healthy salad with enzymes produced by fresh vegetables and shio koji.

Remove the air from the bag as much as you can. 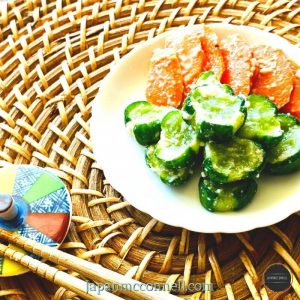 How To Keep Root Vegetables Fresh Longer In A Fridge

All about “Izakaya” in Japan [Vol.1]; The Basic Type Of Izakayas And Little Trivia

Tofu Steak Is Simply Crusted Tofu With Potato Starch: Nothing Less Than IT

Last night dinner. Only the night I can eat this

Clean up the fridge with minestrone soup! Lots o

Bok Choy 101: How To Cook Bok Choy In Japanese Cooking
Bok choy is one of the most popular Chinese greens in Japan. A member of As well as Napa cabbage, it is crispy, has a slight sweetness, and does not break up while cooking. It is a versatile vegetable that goes well with Western dishes as well as Asian dishes. In this post, you can get two savory recipes in Japanese cooking.

japanmcconnell.com
INGREDIENTS 2 heads bok choy greens, washed, removed excess moisture 2 tbsp roasted sesame oil 2 tbsp toasted white sesame seeds 1 tbsp dark soy sauce ½ TSP Chinese chicken soup powder/ dashi powder/ Chicken soup powder 1 TSP sugar 1 clove garlic, smashed/ halved hot chili pepper INSTRUCTIONS Chop roughly bok choy greens. Since they'll be shrunk and to avoid them getting watery, chop them in the large size. (not too small.) In a large skillet/ frying pan, place garlic, hot chili pepper, and roasted sesame oil. Heat a skillet/ frying pan over medium heat. Cook garlic until fragrant. Add greens to the pan. Saute until you can flip the top and bottom greens in the pan over medium-high or high heat, about for 3-4 minutes. Add the soup powder and soy sauce, and saute for another 3-4 miniutes. There'll be much juice coming out from the greens. Shake the pan to cook most of the juice down over high heat. If your stove is an electric cooktop, Move the greens to the edge of the pan, and collect the juice to the center of the pan. Add sesame seeds and stir them well. Turn off the stove. #food #foodporn #reels #reelfood #foodreels #cooking #cookingvideos #stirfry #stirfryveggies #bokchoy #asianfood #japanesefoodporn">
Kroger! This can’t be $3! So good! It’s on

Holy Cow! Easy-Cheesy How To Make Homemade Natto Beans Without Starter Spores
Natto beans are the Japanese traditional super healthy food to eat daily! Generally, you can get natto at any Asian grocery store, but you can save money and eat homemade fresh Natto every day using my easy homemade natto recipe; without a starter, use the instant pot for the whole process.

AVOCADO AND CREAM CHEESE Great For MISOZUKE| Effortless Pressed Sushi Recipe
Marinate avocado in miso! It's an unexpected combination, but the rich buttery creamy flavor will be enhanced and goes well with not only the avocado but also rice and Japanese sake. “Pressed sushi” called Oshizushi is a traditional type of sushi, which literally made by pressing sushi rice and ingredients in a container. Aesthetic, this block-shaped sushi can be an eye-catching dish at a party. Moreover, it is effortless, and super-easy to make even if you've never tried making sushi. Since this recipe is used Misozuke avocado and cream cheese, so I skip seasoning the sushi rice.

Simple Japanese Potato Salad: Traditional Japanese Recipe With Kewpie Mayo
Japanese potato salad, chunky mashed potatoes, cucumbers, onions, eggs, aaaaand Japanese Kewpie Mayo. Savory creamy starchy Japanese-style potato salad is so addictive. Throw in it—leftover veggies, frozen corn, or you can skip some of the ingredients—making them perfect for cozy weekday dinners or as a side in a party spread!

Japanese Pickles With Shio Koji Is An Easy And Healthy Idea For Vegetable Side Dish
Traditional Japanese TSUKEMONO, packed with sweet and delicious natural flavor. Since this recipe is used semi-dried cucumber and carrots, these koji zuke pickles have a unique crunchy texture without a bold watery taste.