First of all, I don’t mistake spelling because I am going to talk about Japanese staple food, “Napolitan Spaghetti”(ナポリタンスパゲッティ), not food in Naples, Italy.

In this article, I am using “Napolitan” on purpose which is close to Japanese pronunciation.

There is a popular pasta dish is called “Napolitan”, “Napolitan Spaghetti”, or “Naporitan” but it is further from “Pasta dish” in Naples, Italy. 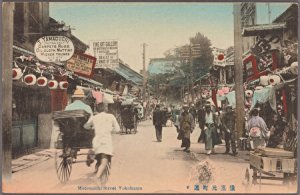 The hotel had been used as the accommodation for U.S. troops, and then the Chef often saw troops had spaghetti pasta with tomato ketchup.

He decided to make something comfort dish for them and made a special sauce with fresh diced tomato, tomato paste, sliced onion, and olive oil.

It became based on his “Napolitan spaghetti”, today it is stir-fried spaghetti with sliced ham, mushrooms and ketchup-based sauce for easy cooking at home. 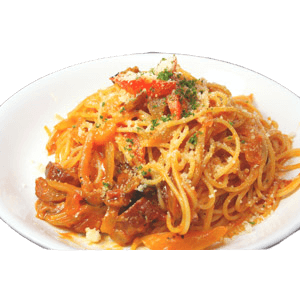 About using tomato ketchup instead of tomato sauce,

there is another story that the sister restaurant of the New grand hotel, “Center grill” started using tomato ketchup because tomatoes were pricy foods at the time.

After that, it became one of comfort food for Japanese people, at home, at the Kissa-ten (traditional coffee shop, tearoom, cafe ), and the cafeteria. 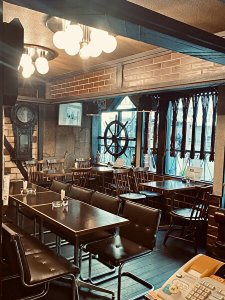 The Retro Kissaten in Nagoya

Due to the high economic growth period after 1955, the number of Kissa-ten had increased throughout Japan, especially in large cities, office workers enjoyed light meals with a cup of coffee as lunch or snacks.

Kissa-ten became the place for not only having coffee but also eating light meals.

Since then, “Napolitan spaghetti” became one of the popular meal and every Kissa-ten started arranging the dish with own recipes.

However, since 1981, the number of Kissa-ten has dropped by half, and there are complex reasons behind disappearing long-loved Kissa-ten.

Therefore, the popularity of “Napolitan spaghetti” has been down and it sounds kind of old fashioned or cheap lunch among young people. 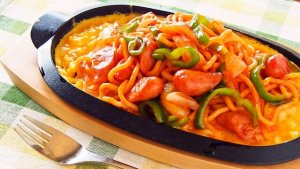 In Nagoya, there is a very unique local “Neapolitan Spaghetti” called “Teppan Napolitan” or “Teppan Italian”.

Due to “Nagoya meshi Boom” in Japan since early 2000, “Kissaten food” was getting revival gradually.

“Nagoya Meshi”- It is the general term of the local cuisine of Nagoya and surrounding cities, which is a cultural, unique yet new taste and got tremendously trend in the early 2000s in Japan.

Nagoya Meshi is typically using with local salty red “miso” or local “tamari” soy sauce, and these seasonings give addictive taste to people from other regions of Japan. Also, there are new Nagoya Meshi was pioneered in Nagoya.

A little after “Nagoya meshi boom” in Japan,

“Showa” Retro Boom has been popping since around 2019, especially among millennials.

“Showa” era is the period from 1926 through 1989, somehow the nostalgic old-fashion design is now trending.

As well as fashion, the trend of nostalgia foods included “Napolitan Spaghetti” came back in Japanese culture, millennials got satisfied with updating pictures from “Retro Kissa”, that they call old fashioned kissaten.

The Ultimate Guide; What You Can Find 2020 Trend Of 100 Yen Shop In Japan
Items in 100 yen shops, Japan has a trend each year like fashion trends. Do you want to know the trend of 100 yen shop in 2020? As old-school fashion is trending now, the nostalgic design is getting hot among "100 yen shop" geeks includes me. The nostalgic cute items are popular among not only people who were born around in the Showa era but also among Millennials. On this page, I am going to introduce what I got from Japan, 2020.

If you want to have an experience of Japanese nostalgia, go to a “Retro Kissa” and taste “Napolitan Spaghetti”(ナポリタンスパゲッティ).

Do you want to walk with me feeling nostlgic Nagoya, Japan?

Why The Nagoya Photo Walking Made Me Happy And Peaceful in Japan 2020
Feel the nostalgic local side of Nagoya, Japan? Why not try my photo walking route, especially when you are interested in the nostalgic and local sights of Japan. Walking through Fushimi area to Shikenmichi historic district with taking photogenic pictures in Nagoya. Excellent to know about the old local small rice cracker shop, Hori riverside, solemn Shrine, historic street but stylish, and nostalgic old shopping street. I met the cute chubby cat in the local narrow alley! Take a peek my summary of Nagoya photo walking. 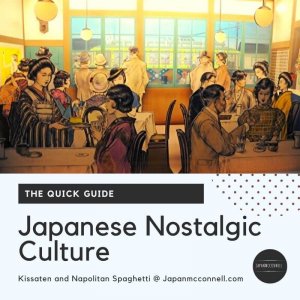 Do you want to make homemade Napolitan Spaghetti???

Nikiri: How To Burn Off Alcohol In Japanese Cooking?