I am often proud to be Japanese especially when I respect one of the Japanese spirits; MOTTAIANAI-もったいない.

Simply, the phrase comes from regrets when we waste something like throwing food away when leaving behind or rotten purchased food in refrigerators, throwing things away even if they can be used more.

If you already have known the phrase “Mottainai”, I am very happy about it.

The phrase commonly used Japan in Japan since ancient times is today attracting attention to the world.

In 2005, Wangari Maathai, the Nobel Peace Prize laureate as the first African woman, encouraged her to make this a universal language.

An Austrian movie director, David Groß, makes movies and TV shows to reduce food loss and waste, he is also impressed by the Japanese Mottainai spirit.

When I talk about Hinoki wood products, even wood flakes and chips produced from the cutting processes are used for several things.

My hubby, who is from the US, always laughs about I use a quarter of a kitchen paper towel with tear it.

He says, he works hard and we can afford to buy kitchen paper towels.

But, it is not my point.

I don’t need the whole sheet of kitchen paper towel to wipe off itty-bitsy something. 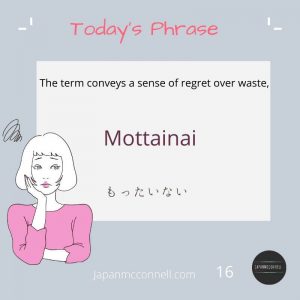 “Mottainai” is a phrase derived from the Japanese Buddhism term, today’s meaning is the regret concept to waste the original value of things.

There are various theories, we believe in “all things” are nothing independent as it is, there is something connected by each other.

For example, we can easily buy commercial food because farmers, producers, delivery service people work hard for us.

Therefore, we should always appreciate food (because of people’s hard work), Mottainai is a beautiful word that makes you feel the background.

In other words, the base concept of “Mottainai” is that there is nothing taken for granted, we should thankful for everything.

It is not only Buddhism belief, but also Japanese old people have told us we shouldn’t forget how poor they were during world wars. Everything was a shortage and they couldn’t buy things easily, so they had been using things carefully, and they appreciated the food that they were eating all the time.

Japanese people have been educated like “do not leave even a piece of rice to show thank for rice farmers.

Thus, the Mottainai spirit has been more deeply inside Japanese.

Certainly, the feeling of “not waste” leads to waste reduction, reusing, and recycling. “Mottainai”-もったいない, is the perfect phrase to express your sympathy for “the regret to lose the valuable thing”.

When Wangari Maathai met the phrase “Mottainai”, she was so impressed and started the environmental activity called the “MOTTAINAI Campaign” in 2005.

“MOTTAINAI CAMPAIGN” has the concept made of three keywords plus one,

The MOTTAINAI campaign promotes a lifestyle for saving the global environment and building a sustainable recycling society.

Another devotee of Mottainai spirits, David Gross, is a movie producer and director, who made the film “Make Food Not Waste.

Do you know that one-third of the food products for humans are discarded as food loss and waste and its weight is 1.3 billion tons every year in the world?

David made a documentary TV series with Japanese “Mottainai spirit”. He traveled across five European countries to tell the people the challenge of reducing food waste by transforming them into delicious dishes. (wastecooking)

“Mottainai” is a word used in the nuance of not being able to make the most of the value of things and being in vain.

Myself As A Japanese

You may laugh about what I do but, I wash well freezer bags, parchment paper, and aluminum foils, and reuse them. Also, I keep package boxes and use them as organizers in drawers.

I carefully keep fresh vegetables and fruits to last longer and cook a certain amount of dishes.

I have a talent for remaking leftovers, so I often transform them into different dishes the next day.

I tear kitchen paper towels half if I don’t need the whole paper.

I make notepads from papers we failed to print out and calendar sheets.

My husband laughs about me and he thinks I am frugal.

Well, I am, but I just don’t like wasting these without one more step before going to trash bins.

Furthermore, when you think of a situation where you use “mottainai”, you can see that it is a word that has more multifaceted meanings than you thought.

For example, when throwing away things and wasting time, when missing an opportunity, when using the money for unnecessary stuff.

Today, the major concept of “Mottainai” is used to solve environmental issues, but its origin is based on Japanese deep culture.

In my opinion, it is the concept to be thankful to the universe for everything, respect those values, and live politely.

Today, the “Konmari” method has been popular, it looks going to be against the “Mottainai” concept, but she tells to say “Thank you” unnecessarily before throwing them in trash bags.

It is said the phrases have the same nuance with “Mottainai” hardly are found in other languages and maybe only Japanese know the real concept.

Therefore, I am very happy I could talk about it on this site today. 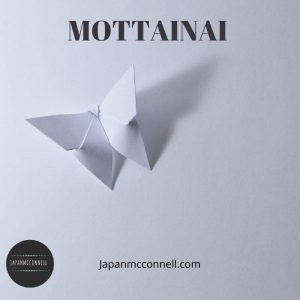 Japanese Cast Iron Teapot; How To Use And Care