Nabe, Nabemono is commonly known as a representative comfort winter dish in Japan and there are so many recipes from regional to family recipes.

The most exciting feature of the Japanese hot pot dish is that it is served on the table on a portable cooktop to enjoy it at the table.

A hot pot dish is served and simmered with different ingredients at the same time in one pot with a rich and tasty soup.

What’s The Difference Between Nabe And Shabu-Shabu

My husband from the US is also confused between Nabe and Shabu-shabu.

Shabu-shabu, is the iconic Japanese cuisine that most visitors want to try during their Japan trip.

Nabe and Shabu-shabu are in the same family of the “Nabemono” dish, which is the hot pot dish served to the table and enjoyed with the family or friends together.

So, there are many types of Nabemono such as

The paper-thin sliced meat is served with a specially shaped pot filled with boiling water.

Just dip into the boiling soup and move back and forward for seconds, and eat the meat with the “ponzu” dipping sauce.

Thus, the dish when we dip the paper-thin sliced meat into the soup, move it back and forward for seconds, and eat it right away tends to be called “Shabu-shabu”.

Basically, a Japanese hot pot is an effortless dish.

Make a broth and cut ingredients. That’s all.

Besides, cooking a variety of ingredients in the same pot together can make savory soup while serving.

So, just dumping cut chicken, sliced pork or beef is nothing wrong, but, today, I’ll tell you my Mom’s signature Nabe recipe-Tori-dango Nabe to upgrade your Japanese hot pot recipe.

As well as other proteins, cooking chicken ball first in the soup can provide the savory chicken broth.

This chicken ball recipe is also effortless, totally, when using a food processor.

I use a mini chopper for this recipe serving 2 people.

This Cuisinart hand blender comes with three attachments- a blinder, mini-chopper, and mixer.

So powerful, easy to clean, and no needed extra space so I love it.

You can use ground chicken or turkey as you like, or chicken thighs, of course.

Yet, I recommend combining all ingredients (after chopping onion, ginger and garlic,) with your hands when using ground chicken/turkey since the chicken balls will be mushy.

Shio Koji is a traditional Japanese condiment that I use a lot in my cooking.

The homemade shio koji recipe is available in this post, or you can get a store-bought one on Amazon.

You can use just regular salt, absolutely.

If you like more flavor in chicken balls, use chicken soup powder or add soy sauce.

Add potato starch or corn starch as a binder.

Personally, I don’t use an egg as a binder since the chicken balls will be too tender to roll a ball and easy to break in the soup.

There is no rule about vegetables for Japanese hot pot dishes.

Especially, I don’t want to say, “get Daikon radish”, “get napa cabbage”, “get leeks”, “get shiitake mushrooms”, and “get Shungiku”, whatever you can’t get easily in your neighborhood, outside of Japan.

Besides, these oriental vegetables are not so reasonable, agree?

Indeed, these vegetables are typical ingredients in Japan so you can stick to the authentic “nabe” recipe if desired.

(*also, the Daikon radish I can get in us is not so delicious as one produced in Japan so I prefer to use radishes. )

Vegetable Suggestions That You Can Get Easily

When you cook vegetables, cook the root vegetables or hard ingredients first and then add leafy greens or easy-cook ingredients such as Tofu.

Since Nabe is a simple dish that you’ll enjoy the ingredients themselves, it’s better to use authentic Dashi broth to create a rich gentle savory Japanese flavor in the soup despite I add chicken soup powder or hondashi powder.

Besides, you can damp a piece of dashi kelp in purified water before going to bed so why not?

When using dashi broth, it can provide a complex savory soup combined with chicken broth and vegetable broth ingredients so you can make delicious soup the next day.

Indeed, the dish called “Shime” in Japanese is commonly adding rice or noodles in the last to enjoy the delicious soup.

Hondashi powder or Chicken stock will be used to adjust the soup flavor.

I don’t use a dipping sauce like “ponzu” sauce, so I also add soy sauce to the broth.

Although we have no room for extra food in our stomachs, “Shime” food is typically served after all ingredients have gone.

Shime literally means “close up” in this term, so, literally the food for finishing up the Nabe dish while enjoying the savory soup.

Speaking of ramen noodles, Korean ramen noodles are suitable for Shime noodles since they are strong, thick, and made for stewing.

Especially, for a Japanese hot pot dish such as “Torisuki”, “mizutaki” which is made of simple clear broth, Ponzu sauce is preferably used as the dipping sauce.

Its refreshing flavor goes well with the simple ingredients so it’s the perfect condiment for the simple Toridango nabe.

Also, Gomadare is a popular dipping sauce for the nabe dish. Generally, gomadare sauce is said for pork, but, it goes well with any hot pot dish.

Chicken and “yuzu kosho” are the perfect combination to add a unique tangy flavor.

You can make homemade Yuzu kosho with limes despite it being called Yuzu-kosho.

Make Yuzu(lime) kosho from now since it takes a minimum of 1 week to get well combined.

Other popular garnishes are 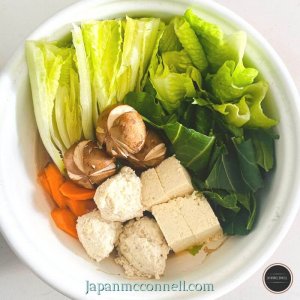 The Best Way To Use Leftover Chicken: How To Make Asian Chicken Lettuce Wrap At Home