Simply, hoijcha latte is a tea drink made of milk and Hojicha.

It is a popular cafe drink since you can enjoy a toasty nutty flavor and aroma even if it’s not used coffee.

Hojicha has a refreshing taste because tannins and caffeine, which are the sources of the bitterness of green tea, are suppressed by roasting tea leaves, so it is refreshing and easy to drink even if it is a latte.

So, Hojicha latte is actually a new taste-it’s not coffee, tea, and Japanese green tea.

Hojicha latte is sometimes described as “Japanese milk tea”, but, it is typically made of steamed milk instead of milk. To be precise, hojicha latte is the latte drink.

It is known for less caffeine drink in Japan and it’s popular for kids drink and bedtime tea.

Mild sweet, clear after-taste, and easy to drink with the simple natural taste of milk and Hojicha.

Even people who don’t like coffee or Matcha can enjoy it, so Hojicha latte is a popular cafe menu in Japan.

Even it is on the staple menu in Starbucks coffee in Japan.

Personally, I also like Hojicha latte than Matcha latte because of its refreshing taste and clear after-taste.

Hojicha latte is yummy and attractive with a nutty, toasty taste without bitterness.

If you want to know about the health benefits of Hojicha, read this post.

One of the charms of the Hojicha latte is low in caffeine.

When looking to replace your cafe latte or Matcha latte with a drink that has a good taste and less caffeine, Hojicha latte can be a perfect choice.

It’s known as a lower-calorie cafe drink. A short regular roasted green tea latte in Starbucks coffee in Japan has 99 calories and the tall size has 275 calories.

When customizing Hojicha latte-switch whole milk to low, non-fat milk or soy milk, non-sugar, or add honey or zero–calorie sweetener instead of sugar, you can cut more calories.

Besides, hojicha has a refreshing and non-bitter flavor compared with espresso and Matcha, it doesn’t require much sweeter.

How To Make Japanese Hojicha Latte At Home

If you get tired of the cafe latte you drink all the time, why not try the hojicha latte?

With just one pot, easy, quick, but authentic. 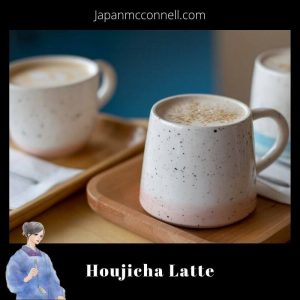 Instead of adding milk into the milk pan, warm up the milk on the stovetop or microwave separately and froth the milk!

You can arrange it with topping such as whipping cream, caramel syrup, cinnamon powder.

How To Make Hojicha Latte With Hojicha Powder

For those who want to make hojicha latte more easily and quickly, use a microwave and Hojicha powder.

Hojicha powder is an instant powder Hoijcha tea that you can make Hojicha with just adding hot water.

It’s portable and doesn’t need a tea set, so it is considered the easiest way to make Hojicha.

Hoijcha will be too strong and too bitter when you add an over-amount of powder so it’s important to follow the guide ratio.

Itoen hojicha powder is made of carefully selected Ichibancha green tea grown domestic in Japan only.

*Ichibancha…Tea leaves are harvested from mid-April to mid-May which is the best green tea season in Japan.

You can make one cup of tea (100cc) with one stick, and you can easily enjoy the natural taste of the tea made with a kyusu teapot.

As it dissolves quickly in hot/cold water, you can enjoy Hojicha through seasons.

Since it is a stick type, you can stock everywhere, and you don’t need to worry about making strong Hojicha tea.

How To Make Iced Hojicha Latte

To make an iced Hojicha latte at home, I recommend using Hojicha powder.

I have done several tries to make an iced Hojicha latte with loose tea or tea bags, but it was hard to serve the same results every time.

You can keep a same concentrate of Hojicha all the time.

If you combine cold milk and sugar syrup at first and pour over hojicha solution, you can make a beautifully layered hojicha latte.

The tip to make it perfect, dissolve hojicha powder and hot water with a milk frother, a small whisk, or Matcha whisk.

If you want to make a Houjicha latte instantly, there is a “hojicha latte mix” produced by AGF.

The “Cafe Latory” series is a premium version of the “Blendy” series.

How To Make Authentic Shrimp Tempura , Not Fritter, With Tempura Batter Mix