I am sure you have already heard the rumor- Japanese mayonnaise is the best!

If you have traveled in Japan, you may notice that Japanese people love mayonnaise.

Mayonnaise has become a household staple item and it is not for fresh vegetable salads, also used for dipping sauces for traditional Japanese street food such as okonomiyaki, takoyaki. Some Mayonnaise lovers called “Mayolaah” (マヨラー) dip Karaage (Japanese style fried chicken) with Mayonnaise. Moreover, there are rice ball ingredients mixed with mayonnaise such as “canned tuna mayo”, “mentai Mayo”.

Mayonnaise is used all over the world, but only the Japanese use mayonnaise for various dishes so far.

I am not the exception, I like Japanese mayonnaise, especially Kewpie.

I always bring 3 -4 Kewpie mayonnaise from Japan and don’t let my husband use it.

So today, I guide you on why Japanese mayonnaise is so special and introduce major products in Japan.

Why is Japanese Mayonnaise So Good? 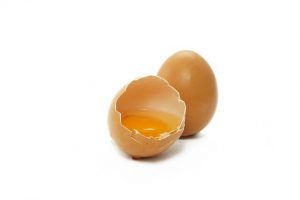 According to Kewpie Corporation, Kewpie mayonnaise is used about twice as much egg yolk as American mayonnaise, in fact, using only egg yolks gives a creamy and mellow taste.

It’s no exaggeration to say Japanese unique mayo flavor, as it is divided so that it can be matched with Japanese foods that use rice as a staple food.

The plastic tube bottle is an important function to keep good mayonnaise taste.

Not only is this easy to squeeze and adjust the amount, but it is also to prevent oxidation and deterioration of taste.

“Oxidation” is the biggest enemy to mayonnaise. 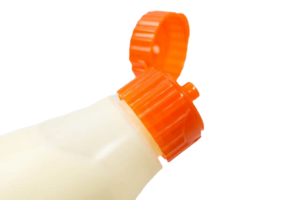 The combination of two materials- plastic and polyethylene, have the effect of suppressing the permeation of oxygen.

Mayonnaise easily oxidizes and loses its taste when exposed to air, but its Japanese taste keeps it tasty for a long time.

Kewpie has 60% of the market share in Japan, and also the first company which produced mayonnaise products in 1925, and sales have grown to 530 billion yen.

The amount of eggs handled by Kewpie is about 250,000 tons per year, which is equivalent to 10% of the domestic production. 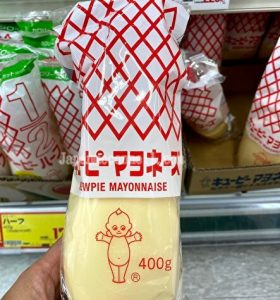 You can’t miss Kewpie mayonnaise in all stores where handle grocery in Japan.

It has been the staple mayonnaise so people grab Kewpie mayonnaise without thinking that much.

Of course, the taste is really good and we don’t have minds to switch other brand mayonnaise from Kewpie.

“Kewpie mayonnaise”(キューピーマヨネーズ) is a representative Japanese mayonnaise that used only egg yolk. About 4 egg yolks are used to a 500g mayonnaise product.
The vinegar used for it in the mix with western and Japanese vinegar.

Well, I always bring “Kewpie calorie half” back to Japan because I can’t find this in the USA.
( I could, but it is more expensive than one in Japan… )

But it is not actually categorized in “Mayonnaise” according to Japanese food standard.

So the taste is lighter and you don’t have to worry about calories! 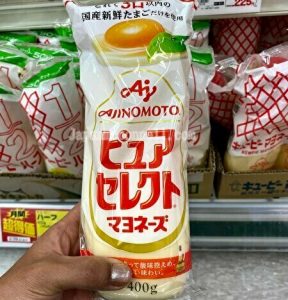 Some mayonnaise products even in Japan uses only egg yolk, and some use the whole egg.

“Ajinomoto Pure Select Mayonnaise” (味の素 ピュアセレクトマヨネーズ) is whiter in color because it is used the whole egg.

The mayonnaise is creamy and has moderate acidity, so it is also recommended for those who do not like the sour taste.

As a feature, we use whole eggs of “domestic fresh eggs within 3 days after harvest”.

“Pure select Kokuuma 65% Calorie cut” (ピュアセレクトコクうまカロリーカット) is the calorie-cut version of Ajinomoto pure select with rich creamy taste as it is.

Look at the Mayonnaise rack of an average-size grocery store in Japan.

So I pick up few kinds of them today. 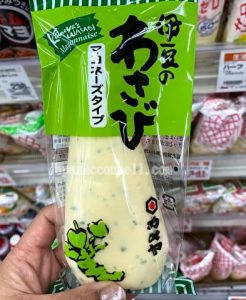 “Kameya Izu No Wasabi” (カメヤ 伊豆のわさび) by Kameya, the wasabi distribute company, is used the chopped wasabi from Izu into a rich mayonnaise.

Shizuoka prefecture has more than 70% of the nationwide wasabi production, and wasabi from Izu (伊豆), Shizuoka Prefecture is well-known as premium wasabi.

It is a regular mayonnaise’s taste just after putting in the mouth, but after that, the flavor of wasabi comes at a stretch.
It is mild wasabi flavor and goes well to any food such as sandwiches, hamburgers, steaks, and potato chips! 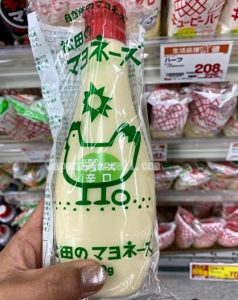 “Matsuda No Mayonnaise” (松田のマヨネーズ), the ultimate organic mayonnaise made from only carefully selected ingredients including fresh free-range & cage-free eggs.

The taste is mild and rich and even you can feel the company’s consideration for customer’s health.

Even cracking eggs is by human-operation!

What do I think is natural organic? To Reduce the process as much as I can.No extras ingredients are added. As much as possible, I am doing the traditional method as it is.
Isn’t it natural organic? It takes time, but I think it’s a natural process to make it over time. Leave it to nature. Whether it is a crop, a living environment for chickens, or fermentation. (Translated by Rico McConnell)

Personally, the Japanese tartar sauce is the best!

I know I am used to its taste but my American husband like Japanese homemade tartar sauce, so what do you think?

The feature of Japanese-style tartar sauce can be “chopped boiled eggs” and “Japanese mayonnaise”.

Have you ever taste Japanese unique and flavorful Mayonnaise?

If not, try once, you may not able to get back the regular one like me! I am very happy that Japanese mayonnaise has a very high reputation overseas today, so I can get them easily even outside of Japan.
(Hoping it get cheaper more…)

Japanese people are obsessed Japanese Mayonnaise, so there are many Mayo food in Japan.

The Favorite Mayo Dishes In Japan; The Japanese People Are Obsessed With Japanese Mayonnaise
Japanese people are obsessed with Japanese Mayonnaise, actually, it is more popular than Ranch dressing in Japan. You will see many dishes used with Mayonnaise when traveling in Japan, even for traditional Japanese food such as sushi, rice balls, Okonomiyaki, Takoyaki. In this site, I am introducing the Japanese staple Mayo dishes and hoping to give you hints for cooking. Also, there is a Japanese-style potato salad recipe if liked.