Every time I find the tip for Japan trip says “Don’t blow your nose in public”, I am not happy about it.

Because THAT IS MISUNDERSTANDING!

There is no official rule you can’t blow your nose in public,

and it is not taboo at all.

The theory has not based on the facts.

However, it is true that some people STILL think it is a bad manner.

In my opinion, it does not count as etiquette for foreign travelers to supposed to follow during the Japan trip if you have the common sense to blow nose.

The funny thing is there are many discussions on the Japanese sites to talk about blow nose or not in public.

It means even Japanese people think it is ridiculous culture if you can’t blow your nose in public but they can sniff.

Today, I am going to tell you the honest opinions of the Japanese people about blowing in Public and then what you can do.

Yes, you can blow your nose in public.

Again, there is no official rule you can’t blow your nose.

• A little bit old statics, but 62% of women have experience of blowing nose in public.

• Most people think it is not a bad manner unless you do in common sense.

The supporters say it is a physical phenomenon, how people can blame you to blow your nose.

Indeed, adults had told children “blowing” in public was a bad manner especially for girls.

As Japanese old custom, making loud noise is a bad manner and Japanese people tend to be a shame to make noise caused by the physical phenomenon.

In old Japan, people expected girls to be “A GIRL” so blowing nose with a “blowing” sound was recognized “shame behavior”.

However, time has been changing and should be.

In fact, people can’t care about the nonsense because of an increased population of hay-fever allergy in Japan.

Some women still are embarrassed to blow their nose because they think it is a shame and also not make others uncomfortable.

In Japan, many people keep sniffing due to nonsense customs.

They should know to keep sniffing is more bothering in public as a bad manner.

It is true that some people are not happy about the noise when you blow your nose.

Seriously, the ESL teacher told me that only Japanese students got startled every time someone blown nose in the class when I had stayed in Canada for leaning English.

I was one of them.

But I didn’t feel it disgusting, just we didn’t get used to encountering someone blown nose in public.

If you blow your nose just once, and someone gives you a dirty look,

What you can do…

You go ahead to blow your nose as usual.

It sounds strange, but Don’t Believe someone says blowing in public is a bad manner in Japan.

I know I am telling you the polite manner you do already,

But if you are not comfortable in case people stare you, at least you can do is

It Is Not Only In Japan

Someone says “Don’t blow your nose in Japan because it is culturally a bad manner”.

It is not only in Japan,

“How do you feel if someone keeps coughing, sneezing, sniffing, blowing?”

In common sense, people don’t want to get sick, and you shouldn’t go to public places when you are sick.

The Last thing I wanna say

The reason I decided to talk about this topic because it is a wrong statement someone keeps saying “Don’t blow your nose in public in Japan.”

It is not totally wrong in some situation like you are having a bad cold, spit your liquid to someone or food, don’t excuse yourself, but as same as your country,

everyone gets uncomfortable if someone blows the nose in a rude way.

If you can’t blow your nose due to the Japanese culture,

Stubborn Japanese have to change their mind.

My 70-year-old Mom says it is OK to blow your nose in public, what’s wrong with that?!

So, don’t be at the mercy of small opinions. 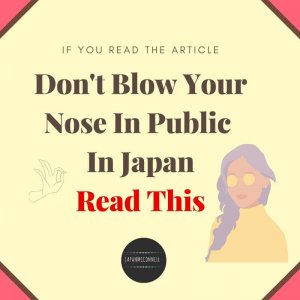