Not only famous mayonnaise but do you know the Japanese culture has also “Worcestershire sauce”???

The Japanese have been twisted (a lot!) the original flavor in authentic British “Worcestershire sauce”, and finally made the unique condiment called “Worcester Sauce”, which has been getting popular as Tonkatsu sauce in the US.

Japanese Worcester sauce and also Tonkatsu sauce obviously have a different taste from the Worcestershire sauce that you have known, which is packed with rich Umami flavor and natural sweetness from vegetables, fruits, fermented ingredients, and amino acids.

So, Japanese Worcester sauce can be eaten as it is.

Japanese people are obsessed with Japanese Worcester sauce since it became the pantry staple, and is mainly used as a dipping sauce for deep-fried food such as Tonkatsu, Ebi-fry, and Tempra.

It’s also a popular sauce for Japanese street food such as Takoyaki, Yakisoba, and Okonomiyaki.

Today, we will focus on Tonkatsu sauce, which is a type of Worcester sauce that also became famous throughout the world.

What’s Tonkatsu Sauce Made Of?

According to Bull-Dog Sauce Comestible Co, Tonkatsu Sauce is mainly made from vegetables and fruits: such as tomatoes, prunes, dates, apples, lemon juice, carrots, onions, and celery.

Moreover, 30% of the raw materials of tonkatsu sauce are vinegar

Is Tonkatsu Sauce The Same As Worcestershire Sauce?

First of all, there are many types of Worcestershire sauce but called Worcester sauce (u-su-ter sauce) in Japan.

Tonkatsu sauce is categorized in the Worcester sauce family, which has mainly three categories depending on consistency, viscous, flavor, and sometimes purposes.

The Difference Between Okonomiyaki, Takoyaki, And Yakisoba Sauce

The Okonomiyaki sauce contains meat and seafood broth in addition to the Worcester sauce.

The yakisoba sauce is spicy and less viscous, with plenty of meat and seafood broth.

Worcester sources are one of the essential condiments in Japan, and the taste quite differs from Worcestershire sauce.

The basic flavor is similar to Worcestershire sauce, however, Japanese Worcester sauce tastes more complex flavors such as “sweet, spicy, and tangy” since the sauce contains a variety of raw materials as I mentioned-such as vegetables, spices, vinegar, water, and sugar.

Even Japanese Worcester sauce is tasty as itself.

How Do You Use Tonkatsu Sauce

Basically, as the name suggests, Tonkatsu sauce is served with Tonkatsu which is a Japanese-style pork cutlet.

Besides, you can use any type of deep-fried food, especially, breaded fried dishes.

Since the sauce is very thick, it can keep the coating crunchy without being absorbed and can be perfect for drizzling.

Tonkatsu sauce is specially made to sweet and fruity flavor, so you can add hot spiciness if desired.

We call Japanese aurora sauce, which is the mix of Tonkatsu sauce and Japanese mayo, and sometimes tomato ketchup.

Besides, Japanese aurora sauce will add a unique delicious hints to your burgers.

As I said, these three special sauce is mainly made of Worcester sauce, so you can use Tonkatsu sauce to make Okonomiyaki, Takoyaki, and Yakisoba noodles.

In fact, I have never bought these three sources in my life, nor did my mother.

How To Make Tonkatsu Sauce 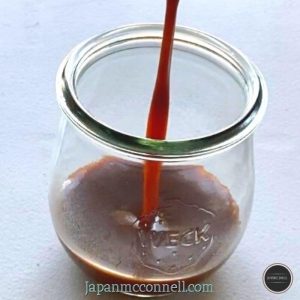 Rico McConnell
This authentic Tonkatsu sauce is easy to make, delicious and addictive. Thick, sweet, tangy, and savory sauce. Japanese people are obsessed with Japanese Worcester sauce since it became the pantry staple, and is mainly used as a dipping sauce for deep-fried food such as Tonkatsu, Ebi-fry, and Tempra. It’s also a popular sauce for Japanese street food such as Takoyaki, Yakisoba, and Okonomiyaki.
Print Recipe Pin Recipe
Cuisine Japanese
Servings 2 people

How To Keep Leafy Vegetables Fresh Longer In My Fridge: Will Stay Fresh Up To 3 Weeks!?

Classic Japanese Karaage Chicken Recipe: How To Make It Crispy