Could you tell me why “Yaki Udon” is so popular worldwide?

We like Yakiudon but I didn’t know that is a cool Japanese food until moving to the US.

I met a Uber driver the other day who is a big fan of Japanese culture and ask him which Japanese food he wants to try the most when visiting Japan, his answer was shocked me.

To me, Yaki Udon is a typical weekend lunch at home as well as Yakisoba noodles and Instant ramen noodles.

Besides, The best Yakiudon noodles are actually the ready-cook “SUGAKIYA YAKIUDON”.

(If you visit the central region in Japan and stay where you can cook, find it in the grocery store. )

So today, I am going to introduce the basic Authentic Japanese recipe and my unique Udon noodle stir fry which is used Miso sauce.

If you are looking for a brand new taste for Yakiudon, try my recipe!

It is an idea to buy an Udon noodle kit at the Asian food section in a regular grocery store and use pouched fresh Udon noodles in it.

If you can get frozen or fresh thick Udon noodles, you are fine.

So I use dried Udon noodles that you can get easily at a popular grocery store such as Walmart, Giant Eagle, ALDI, Sainsbury, M&S, Tesco.

Thaw frozen Udon noodles in a microwave for a few minutes rather than boiling them. Also, it doesn’t need thaw completely.

When using a fresh Udon, (pouched Udon noodles,) it can be cooked together in the pan so you don’t need special preparation.

According to Yaki Udon history, dried Udon noodles have been used for an original Yaki Udon. It’s good news, isn’t it?

Cook dried Udon noodles until they become in “al dente”.

After cooked, drain and rinse them with cold water until the slimy feeling is away. It is not necessary to apply oil to the noodles because they will be loosened when steaming.

Green cabbage, beans sprout, carrots, and onions are commonly used for Yaki Udon in Japan. It just because of the regular stock vegetables for the Japanese, so there are no certain rules.

It is difficult to get fresh thick bean sprouts for me where I live, so I don’t (can’t) use it.

But the vegetable that has much juice will make noodles too soggy.

Choose the vegetables with a crispy texture that makes a good harmony with noodles.

In Japan, we generally add protein for Yaki Udon. Thinly sliced pork belly is often used, but you can use other meat of course includes seafood, processed meat such as bacon, hams, and Vienna sausage.

About The Sauce For Yaki Udon

Roughly speaking, there are two types of sauces for Yaki Udon in Japan.

There are a variety of recipes for the sauce ingredients, and there is no certain rule for Yaki Udon.

For example, my mother and I like soy sauce-base, but my father likes Japanese Worcester sauce-based.

About Japanese Worcester Sauce & Recipe
3 + 1 Sauce Recipes For Japanese Pork Cutlet; Tonkatsu Sauce, Miso Sauce, Easy Aurora Sauce
Everyone is addicted to deep-fried foods. Do you want to try Japanese popular dipping sauce? Here are 3 easy recipes that you are looking for. The Japanese are obsessed with Japanese-style Worcestershire sauce aka Worcester sauce (ウスターソース) and there are many types of sauces for especially deep-fried food such as Japanese pork cutlets. Also, Nagoyan, people who live in Nagoya city, love Miso sauce! (I am from Nagoya). Lastly, super-easy Japanese Aurora sauce.

But today, I am going to make a unique Yaki Udon with sweet-Miso sauce.

Also, many Japanese people use “Men Tsuyu” (めんつゆ), it is the instant Japanese sauce base for anything such as Japanese Pot-au-feu, stir fry, and dipping sauce for noodles.

“Men Tsuyu” is already combined with “Dashi” soup and sweetness, so you don’t need to add “Dashi” and also Mirin.

When using “Men Tsuyu” for Yaki Udon, make a sauce with

Note: Adjust the amount of soy sauce depends on the Mentsuyu taste that you use.

When stir-frying vegetables and noodles, noodles often get soggy and sticky easily, or vegetables get over-cooked losing their fresh crispy texture. I make a list of tips for making Yaki Udon here. 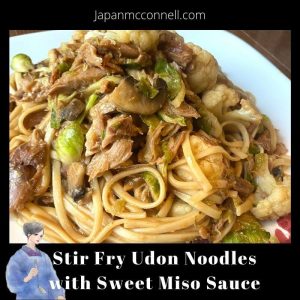 On the outside of the standard soy-sauce-based sauce, yaki udon has many recipe variations. By looking at the idea recipes I have introduced so far, discover a new favorite recipe for yaki udon. Please Try my tips for stir fry Udon noodles.

japanmcconnell.com
The Quick Guide of Japanese nostalgic culture; Kissaten and Napolitan Spaghetti, not a misspelling
First of all, "Napolitan" is not my mis-spelling because I am not talking about Neapolitan food. In this article, I am using "Napolitan" on purpose which is close to Japanese pronunciation. "Napolitan Spaghetti" is the Japanese style stir-fried spaghetti with Tomato ketchup-based sauce, which has been loved as comfort "Kissaten" food for many years in Japan. Due to the "retro boom" in Japan, this nostalgic food came back as well as "retro Kissaten" in recent years. In this site, I am going to explain the history of "Napolitan spaghetti" and Kissa-ten.