The native guide; All about unique Japan How to get to TOYOTA KAIKAN MUSEUM by Nagoya subway | Japanmcconnell
Home
Travel Guide
Sponsored Link

Are you wondering how you get to Toyota Kaiakan Museum by public transportation?

Toyota-city is one of the large suburbs of Nagoya city in Aichi prefecture, however, it is not so convenient city to transfer around outside of driving a car.

There are several ways to get there but in my opinion, this is the easiest way for the visitors for the first time.

Nagoya Railway aka “Meitetsu” also is common transportation to the museum, but it is a little complicated to get on the right train from Nagoya station and also needs to change a train.

You can use “JR Line” too but it takes a little longer.

Thus, I recommend taking the Nagoya subway and Meitetsu Bus that we took. 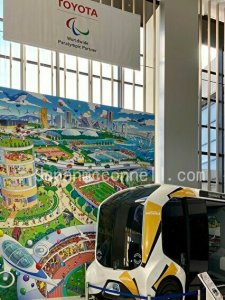 TOYOTA KAIKAN MUSEUM is a very popular amusement park to learn about Toyota technology and the most thing attract visitors is ” the free TOYOTA plant tour”.

You need to book for the plant tour in advance if you want to participate but it worth it.

The reason I call it an amusement park, not a museum, is because you can enjoy the museum beyond the concept of corporate PR with having experiences of TOYOTA’s cutting-edge technology.

Also, there is a gift shop where you can buy Toyota 2000GT mini-cars and plastic model kits, sweets and stationaries that you can get only there!

Where the museum is located 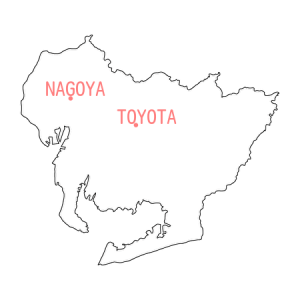 Toyota city is one of the surrounding cities of Nagoya city, and as you know the city is most famous for TOYOTA headquarter office.

The major transportations access to Toyota city from Nagoya city are driving car and Meitetsu train.

5 Things to do in TOYOTA city, Japan
Do you know TOYOTA CITY which is the suburb of NAGOYA CITY? The city is famous for the TOYOTA headquarters office and also the Toyota museum, Korankei valley, and art museum. Toyota city is full of the nature of the authentic countryside of Japan. If you have time to spend one day visiting Toyota city during visiting Nagoya, try 5 things you should do in the Toyota city area.

There are several ways to access the museum, any way takes almost 1 hour to get there.

You could use JR line but it takes longer and could be comlicated.

From now, I am going to explain how we got to the TOYOTA KAIKAN MUSEUM from Nagoya city.

We chose to take a subway to get there because, 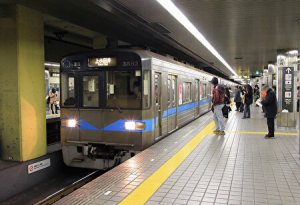 To get to Toyota Kaikan Museum, use “Tsurumai (Blue) Line”

Tsurumai (Blue) Line is a very unique subway line in Japan because it shares the same track with Meitetsu Line, so it changes the name to “Meitetsu Line” after Akaike station until Toyota-shi station.

Therefore, it might be confusing for the people who are not familiar with Tsurumai (Blue) line.

From Nagoya station, take Higashiyama (Yellow) Line and get off “Fushimi station” (one-stop).

You can use prepaid transportation card for this all trip.

japanmcconnell.com
How to get the cutest prepaid transportation card in Tokyo
Do you want the cutest prepaid transportation card in Tokyo, Japan? "Pasmo Passport" is produced for short-term foreign travelers who want to bring back the prepaid card as a Japanese gift. Three Sanrio characters, Hello Kitty, Pompom purin, and Cinnamon roll on the card cheers you every time you take out your pocket. On this site, I will explain what "Pasmo Passport" is, how it works, where you can buy. I give you information about how I got it at Narita Airport too. 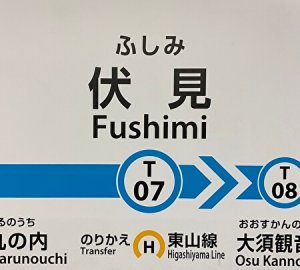 At Fushimi Station, go to the platform toward “Yagoto • Akaike • Toyota-shi”, NOT toward “Kamiotai • Marunouchi”. 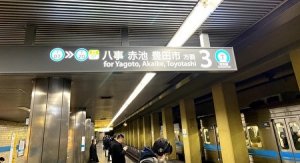 How to read the time table of Tsurumai Line 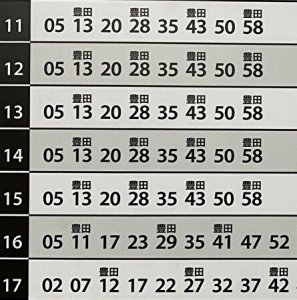 You should be careful to read the time table for the Tsurumai (Blue) Line, as I mention, Tsurumai Line shares the same track with Meitetsu Line.

There are two kinds of subway exist, one is just subway which ends Akaike station, another turn to be Meitetsu (overground train) Line toward Toyota-shi station.

When you look at the tame table, you will see “豊田” on the number, it means the subway goes to “Toyota-shi station”.

Even though you get on the regular subway, don’t be panic.

Just get off “Akaike station” and transfer the subway (train) there. 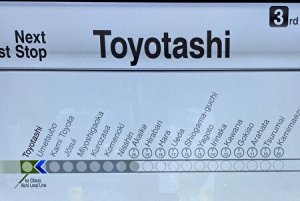 You can just relax until the last stop, “Toyota-shi station”.

There is monitors to tell you where you are going, if not (some old subway don’t have monitors) check rail maps on the subway.

Anyway, the destination is the last stop so you will not miss the station.

If you find out you are on the just subway line, you can get off “Akaike station” and change to the Meitetsu train.

Step by step From Toyota-shi station 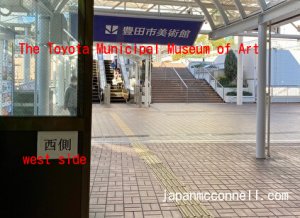 When you get off “Toyota-shi station”, proceed to the west side.

You see the convenience store, “Family mart” and public telephones by the west exit from the ticket gate. 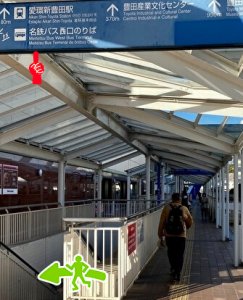 While proceeding to the west, you will see the sign said “Meitetsu Bus West Bus Terminal” and go downstairs. 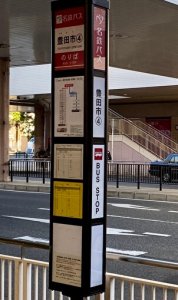 When you reserch the route on the google map, it might tell you taking another bus called “Toyota oiden bus 26” for Toyota Kaikan Museum.

Either way goes to Toyota Kaikan Museum. If you chose “Toyota oiden bus”, follow the goole map.  My information on this site is taking “Meitetsu Bus” only. 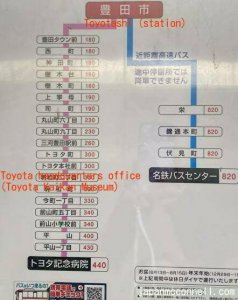 How to get on and off the bus 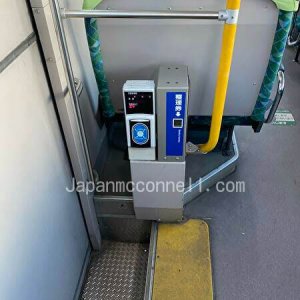 1.Get on the bus from *the back door, and touch the iC card reader or take a ticket from the vendor if you don’t have a transportation card.

*It depends on a bus, sometimes get on a bus from a front door. 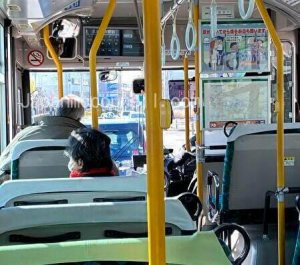 2. There is a monitor on the front, you can check the coming stop in English.

You can also ask a driver you want to get off “TOYOTA KAIKAN MUSEUM”.

In our case, the driver stopped at “TOYOTA KAIKAN MUSEUM” for us even though we didn’t ask for it. (I guess many overseas visitors use the bus to the museum and my husband exactly looks like an overseas visitor.)

When the stop is coming next, push a red button on the wall.

3. When you get off, touch an IC card reader at the next to a driver with the same IC card that used to get on, or throw cash in the machine.

Also, you can pay for your company at the same time if you tell the driver.

I paid with my IC card for two because my husband forgot touching the reader when he got off the bus.

The 69 bus stops right on the front of the parking for the museum, “TOYOTA KAIKAN MUSEUM” is just on the left side of you.

What we made a mistake

I highly recommend getting the time table of buses to the station before starting the day from the information counter at the museum.

I didn’t ask the time for the bus, so we just missed the bus to go back to the station.

The 69 bus comes only once every hour and my husband hates waiting.

We called a cab (the information counter calls a cab for you) and it cost about ¥2,000. 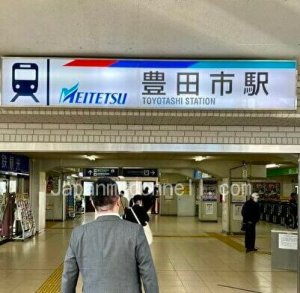 It is very easy to go back to the Nagoya station from Meitetsu Toyota-shi station.

After the ticket gate, go up to the platform.

Wait for a train on platform 2 toward Akaike, Fushimi, and you can get on any train (or subway) departs from platform 2.

The summery of today