The native guide; All about unique Japan How Do The Japanese Make Tough Meat Tender At Home | Japanmcconnell
Home
Food & Recipes
Sponsored Link

There are many tenderizing meat techniques worldwide and in Japanese home cooking is not exceptional.

We have many techniques to tenderize tough meat to make them juicy, moist, and tasty when we buy meat at discount sales!

We don’t eat A5 wagyu beef every day!

And actually, domestic produce meat costs more than imported meat, and interestingly, chicken breast is much more reasonable than chicken thigh.
So, we need to know various tenderizing technics.

For example, we simply rub sugar on meat, or marinade or cook meat with Coke.

Today, I pick up the best unique meat tenderizing techniques that get the best results all the time.

Do you know baking powder can tenderize meat?

To be precise, baking soda contained in baking powder works to tenderize the meat while breaking down the meat protein.

So Why Do I Use Baking Powder?

Simply put, based on the experience of using baking soda in this solution, I don’t like the unique (unpleasant) bitterness of baking soda transferred to the meat.

One time, I tried “BAKING POWDER” to make the solution instead of baking soda, it was successful.

You can keep the original meat flavor (even moist) and tenderize it without transferring the bitterness.

The Basic Ratio For My Secret Wet Brine

The basic ratio for my secret wet brine with baking powder,

As the guide, I usually use this amount of the solution for

You can adjust the basic brine according to the weight of the meat you cook.

No More Dry Thanksgiving Turkey! Tender-Moist Turkey Dinner With My Baking Powder Brine [No Salty]
Does baking powder tenderize a turkey? Yes. Do I use it as a dry brine for thanksgiving turkey dinner? Nop. I brine a whole turkey (or a half turkey) in the baking powder solution which I introduced as the Japanese meat tenderizing hack before in my posts. Baking powder helps break down protein while keeping moist in the meat. So, kiss a dry turkey goodbye this holiday!

I Am Not So Meticulous Ever…

Honestly, I am not so meticulous about the ratio to brine meat with the baking powder solution.

If I feel the meat weighs more than 1.5lb, I double the ratio.

Besides, I add water if it is not enough to cover the meat.

Only you should be careful about the amount of salt.

It is better to reduce salt when using natural mineral salt.

I use Himalayan pink salt so generally, I use 3/4 tbsp for the basic baking powder solution. 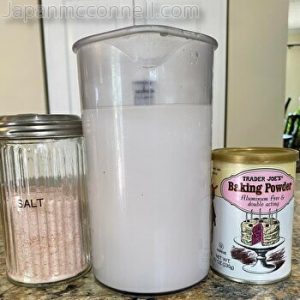 This baking powder brine can be used for any common meat such as beef, pork, and poultry.

Especially when soaking poultry (chicken breast, chicken thighs, turkey breast, turkey thighs, whole chicken and turkey ), you will be surprised how it will be tender and moist.

Only once, I cook a whole duck after soaking it in the solution, I didn’t get much result like other meat. I am going to try it again soon though.

Also, you may want to reduce brining time if you like the “meaty texture” in the meat.

This means it is not suitable for beef steak.

For example, I like tender pork ribs almost fallen apart from bones, but my husband prefers a more meaty texture.

The salt hardly is dissolved in cold water so I use boiled water to dissolve it and then add ice to chill. Or, you can boil water and salt on a stovetop.

*Don’t put baking powder in the hot water, you will have to clean the mess.

Make sure the solution is not warm when brirnig the meat.

I recommend leaving the meat in the baking powder brine anytime between 8 hours to 24 hours for the regular size of meat.

You can brine the meat for up to 48 hours, but don’t recommend leaving it more than it as the point of safety tips.

The minimal time is 4 hours for the small amount of meat or thin-sliced meat.

However, marinating them for 8 – 24 hours will better result.

Again, you can shorten the time if you like the texture of the meat.

When using a baking powder solution, it’ll be fine (the meat will not have a bitter flavor), but you can wipe off or rinse lightly if concerned.

However, rinsing raw meat can increase the risk of cross-contamination in the kitchen.

Learn How To Make The Baking Powder Brine In 5 MIN 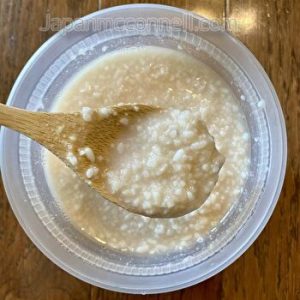 “Shio Koji” aka “Koji Rice” is a traditional fermented condiment from Japan.

Despite Koji rice sounds (looks) mysterious to you, it has such a powerful tenderizing effect and also brings “Umami” (the savory flavor) to meat.

Honestly, I don’t want to scare my husband so I haven’t told him what it is exactly.

Koji rice can be used for beef, pork, poultry, and fish.

Koji rice also breaks meat protein and the Amino acid contained in it can add rich Umami flavor. So, Koji rice can be used to eliminate fishy taste.

Pork after marinating with Koji rice is juicy, soft with rich Umami flavor.
Even if you cook pork loin and pork tenderloin, Koji rice can keep them away from drying.

When making Japanese pork cutlets, the meat sometimes becomes dried, however, it will never happen when you marinade pork with Koji rice.

When making Japanese pork cutlets (the recipe is here) with them, I highly recommend using Koji rice.

How Long You Should Marinate Meat With Koji Rice

Basically, use 10% Koji rice to the total meat weight.

Contrary to the baking powder solution, you don’t need the marinating time overnight.

Moreover, the meat will be salty when you do so depending on the size of the meat!

So, how long is the best marinating time?

Should I Rince Meat After Marinating With Koji Rice?

The taste of Koji rice is often described as mild, sweet, alcohol-like. If you have tasted Amazake in Japan, Koji rice is similar to it.

Anyway, I would say it is very unique, so you may need time to get used to it.

But, it doesn’t mean it is awful. Juuuuuust, Unique.

You may not like its unique flavor, so you can reduce the amount of Koji rice and also remove it or rinse the meat lightly if desired.

Moreover, the sugar contained in Koji rice is easy to burn while cooking so it is better to remove it for grilling and baking.

How You Can Get Koji Rice

You can get “Shiokoji” on Amazon or you can make it at home.

Here is the Shio koji guide to know how to use and make.

The Japanese Cooking Guide; Koji Rice
Koji is the Japanese fermented condiments as well as Miso paste, soy sauce, Mirin, Japanese sake. You will be impressed with "The power of Koji", "The Koji magic", once you start using "Shio Koji" in your cooking. Especially, to marinate meat and fish, it does not only tenderize them but also brings its umami, the savory flavor. In this site, I will explain what the koji rice is, how to make it, use it, and keep it!

The idea of marinating with BBQ sauce is from tips for making meat tender such as by marinating with grated onions, pineapples, apple juice, pears, honey, sugar, Japanese sake…

So, I combined some of the ingredients, make homemade Japanese BBQ sauce.

You know the Korean cooking hack to marinate meat with Korean BBQ sauce, this is the same!

The enzymes effect by fruits, onions, Sake, and soy sauce contained in the sauce can make the meat tender.

Besides, sweet BBQ sauce contains sugar and honey which can tender the meat too.

Also, sesame oil can coat the meat and keep the juice inside.

Generally, I don’t use my homemade BBQ sauce for meat roast and use it for BBQ grilling.

You can bring any kind of meat and add an Asian breeze for BBQ tonight.

The best result is marinating meat for a grill for 2 hours, not shorter and longer.

Marinating overnight will probably be alright if you like the strong taste, but soy sauce can work negatively-salty and may let the meat dry.

It’s better to freeze marinated meat rather than leave them in a refrigerator overnight.

Of course, this will be good as a dipping sauce and also as a dressing for salad.

Although the marinating time is not for long, you should make this Japanese BBQ sauce the night before.

As letting it overnight, flavors combine well and produce a rich taste.

You can get Japanese-style BBQ sauce online if you don’t have time.

“Ogon” means “Golden” in Japanese, and this BBQ sauce is the most staple BBQ sauce for home Yakiniku in Japan.

In my memory, it was already there when I was a kid, it has been around since 1978. It is said medium spicy but has rich sweetness.

It can also be used for stir-fried dishes, so it’s useful as a seasoning.

Gyukaku is the most popular Yakiniku chain restaurant nationwide in Japan which serves delicious meat at a reasonable price and friendly service.

It’s strong soy sauce-based and has a hint of ginger.

You can also use Japanese BBQ sauce to marinate meat for making Japanese Karaage chicken.

If you are interested in my Karaage recipes, read these posts later!

The Native Ultimate Guide; How To Enjoy Shochu Like A Japanese