Despite the definition of this classic highball cocktail, highball in Japan refers to whiskey and soda, which is a popular Izakaya drink as well as beer and Chu-Hi.

Why has “whiskey and soda” called Highball in Japan become the staple drink?

It seems not only because Japan is one of the countries that produce good whiskey.

Here are 5 secrets of highball in Japan that makes you enjoy whiskey highball more.

Highball 1: an iced drink containing liquor (such as whiskey) and water or a carbonated beverage (such as ginger ale) and served in a tall glass 2: a railroad signal for a train to proceed at full speed -Merriam Webster

In general across the world, the cocktail called “highball”, is not only based on whiskey but also any liqueur, or spirits mixed with carbonated beverages.

For example, it is “highball” even mixed with a sweet liqueur and ginger ale.

Since highball is a general term for cocktails, you need to order what kind of highball you like to mix with what.

For example, you need to order “whiskey and soda” when you want the whiskey with soda.

Yet, somehow, “highball” often refers to “Whiskey and soda” in Japan.

So, “whiskey and soda” will be served when you order “highball”.

What Is Highball In Japan

The cocktail called “highball” in Japan mainly refers to “whiskey and soda”. Sometimes, it refers to “Shochu and soda” which is often called “Chu-Hi”.

When whiskey was recognized as the status drink after the war, “whiskey and soda” was also a popular cocktail since it makes whiskey easy to drink and goes well with Washoku, Japanese cuisine.

However, whiskey highball popularity cooled down around the 1970s.

While people were obsessed with ice-cold (fake) beer, Chu-Hi, and sour cocktails at cheap Izakaya restaurants, whiskey and whiskey highball were getting left out due to the whiskey stereotypes.

The History Of Whiskey Highball

The glory of this popular cocktail has a secret story related to the decline in whiskey sales after 1983.

Whiskey began to be popular in Japan after World War II.

With the Japanese economic miracle, whiskey was rapidly getting a reputation as a stylish drink and a status symbol among gentlemen.

Besides, top-shelf whiskey was a social status to Japanese businessmen.

In the 1970s, the Japanese drinking culture became more diversified.

People looked for more reasonable alcohol drinks since Izakaya culture had been penetrating. Young people especially young women avoided drinking whiskey since they thought it was “Old-fashion” and “Old-men”, not a cool drink for the girls to get attention from bachelors.

Also, due to increasing the alcohol tax and the Chu-Hi boom, since the sale of whiskey had a peak in 1983, it had been declining rapidly.

This social phenomenon had enough to break down the whiskey’s social value as a status symbol.

However, whiskey began to revive due to the “whiskey and soda” boom in the 2000s.

A popular whiskey company has made a significant contribution to regaining whiskey sales. This is why “highball” refers to whiskey and soda in Japan.

Founded in 1899, it is one of the oldest liquor sales companies in Japan and manufactures Japanese whiskey.

Suntory has contributed to one of the top sales of Japanese whiskey products.

To get back the “whiskey” boom in Japan, this company has contributed to changing the stereotype of whiskey- the “old-fashion” drink.

Also, whiskey reminded “on the rock” at a stylish bar, which kept far young people away.

Suntory launched the “whiskey highball” campaign to get young people to know more about whiskey.

Suntory focused on “Highball” which is known for making whiskey easy to drink at the start.

“Kaku” is a dry whiskey that goes well with soda and is also easy on the wallet, it was expected to become a casual drink like beer and chu-hi.

Then, using a beer mug for whiskey highball, Suntory made it a more casual and easy drink for young people.

“Kaku” is now popular whiskey for whiskey highball which is dry, smooth, and smokey, yet has a high-quality flavor as daily whiskey.

It was not an easy task to change whiskey stereotypes, the well-known TV commercial became a trigger for the big sales of “Kaku” and “Kaku highball” in 2009.

“Highball” was nominated in a trend ranking of the year in Japan, and it could be recognized as the “Highball” revival.

When you are lucky, you can find a “highball tower” Suntory developed the Highball maker for Izakayas and bars to serve the best KAKU highball all the time!

“Kaku bin”(角瓶) is the signature whiskey product of Suntory.

The name “Kaku bin” is from its unique patterned square-shaped bottle,

“Kaku bin” aka “Kaku” is well known as daily casual whiskey compared with famous top-shelf whiskey such as “Hibiki” “Taketsuru” and Yamazaki”.

Although it is known for daily whiskey at a reasonable price! Suntory Kaku has a rich, mellow sweet, and dry flavor.

As I said, Kaku has been well-known for being the best whiskey to make highball in Japan. So smooth but enough strong whiskey flavor.

One of the reasons why highball has been so popular as a regular Izakaya drink is not only its refreshing taste but also as a low-cal & low-carb alcoholic drink.

Whiskey is distilled spirits like vodka, shochu, and gin, which do not contain sugar or very little sugar.

Besides, a highball is divided with carbonated water, so it can be low-calorie rather than “on the rock”.

How To Make Highball Whiskey At Home

There are a few tips to make “Japanese-style” whiskey highball at home.

In Japan, we can get special large-sized ice made of natural water (soft water), but, now I live in the US, so make ice with purified water.

Personally, I don’t use top-shelf whiskey to make highball. (You know I mean…) Also, I prefer a less smokey flavor for the highball.

Japanese whiskey is made for the Japanese favorite taste, and you can enjoy a complex delicate flavor. Light mild finish.

Scotch whiskey has the sweet and sour flavor of barley malt and the astringency and bitterness of barrel. The longer the aging period, the more mellow sweet flavor. It has a unique scent called “peaty”.

Canadian whiskey is relatively easy to drink and suitable for whiskey beginners. Smooth, light, and no habits.

Irish whiskey has a strong grain flavor yet a smooth flavor without a smoky flavor.

According to Suntory’s theory to make a perfect Highball,

The Best Ratio For Japanese Highball

The best ratio of Japanese highball is whiskey: Carbonated water = 1: 4. The alcohol content will be about 8%.

Of course, one of the attractions of highball is that you can enjoy it by adjusting the ratio to your liking.

If you like a strong one, you can make it with a ratio of whiskey 1: fizzy water 3. (the alcohol content will be 12%.)

For the best result for Japanese highball, strong fizzy water is very important.

The Japanese highball lovers include me, we look for heavy bubbles in highball to quint our thirst.

I haven’t seen my favorite strong fizzy in the US, so I rely on SodaStream for my daily highball.

6 Facts About Why I Like Sodastream; Save Money And Earth
I have been waiting to introduce my "Sodastream" love for long, and finally, I got ready to tell you how much I love it. This site is not telling you like that you must buy one or which models you must buy, bra bra bra. I just want to show how SodaStream works for my life. If you consider buying a soda maker and want to know about SodaStream, I can share my Sodastream love with you.

In my opinion, to make a “Highball” doesn’t have to be top-shelf whiskey.

Because I like to taste good whiskey as it is with straight or “on the rock.”

Another reason, I am frugal so I don’t want to use expensive whiskey for a mixed drink.

I always buy a daily whiskey (which means affordable price) for a “highball”.

But, it is your option. 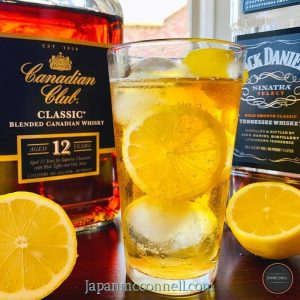 Rico McConnell
The Japanese Highball is a little far away from the classic highball cocktail at a stylish bar. "Highball" in Japan mainly often refers to "whiskey and soda" or sometimes "Shochu and soda". Highball is really popular Izakaya drink as well as ice-cold draft beer, Chu-Hi, and lemon sour! RELAX, I want to introduce a "Japanese-style" whiskey highball but that doesn't mean it is made of JAPANESE WHISKEY. So refreshing, dry, simple, fizzy, and fresh lemon, that's all need!
Print Recipe Pin Recipe
Course Drinks
Cuisine Japanese
Servings 1 serving

Highball is the classic cocktail made of spirits and often carbonated water.

So, here is the homemade coke recipe to try after Japanese-style whiskey highball!

How To Order Highball at Izakayas In Japan

As I said, “Highball” refers to “Whiskey and soda” and it’s always found on the menu at Izakaya restaurants in Japan.

You can order just by telling a staff “highball, please”.

You may be asked which brand of whiskey is preferred when an Izakaya offers several kinds.

For example, Toris (TORISU, トリス), black Nikka (ブラックニッカ), and Jim beam are the most popular brand at the bottom price, and Kaku-Hi (角ハイ, the highball used Suntory Kaku) is also on the menu with the different price.

Personally, I like black nikka and Kaku, and will not order Toris ad Jim beam.

Toris is very light and smooth, no smokey flavor, so it is recommended for those who don’t like whiskey much.

I don’t like bourbon so much, so I don’t choose Jim beam.

Black nikka is also popular daily whiskey (cheaper than Kaku), and I like its dry and smoky flavor.

You can ask if making a strong one depends on Izakayas but some Izakayas offer the extra pay for it, or even they don’t have the option.

When you want to ask the strong whiskey highball, say “Koime(濃いめ), please”.

I tried to order “give me less water if you don’t offer stronger highball”, and they accepted but looks not so appreciated…

Isn’t it fun to know why highball became part of Japanese drinking culture?

It’s so refreshing with strong fizz and fresh lemon, and smokey whiskey flavor.

The happy news is low sugar!

“Highball” is one of the Japanese lifestyles as well as icy cold draft beer, Chu-Hi, and Lemon sour. why not try it during the dream Japan trip.

But don’t drink too much!

If you want to eat low-cal nibbles at Izakayas, read here!

10 Healthy Izakaya foods in Japan
Do you care about calories of Izakaya foods during traveling in Japan? Japanese cuisines are known as healthy food, but not all!! Especially Izakaya food there are lots of fascinating foods, Deep-fried! I know, I have the same strugglings every time I go back to Japan and I like drinking. Luckily in Japan, many healthy menus outside of olives, vegetable sticks. Find out on this site, I will give you calories on each dish too.

The Heart Of Japanese Fermented Food, Koji Rice| How To Make Shio-Koji

Catch Up With New Trends In Japan: Homemade Cola Recipe