This sauce is well-known as an accompaniment to golden crispy deep-fried seafood.

This easy homemade Japanese tartar sauce is better than anything (especially if you’re hungry) you can buy at the store.

It’s creamy, refreshing, kicking, filling, and perfect for serving next to your favorite deep-fried dishes and sandwiches. Mayonnaise provides the whole balance of flavor in this tartar sauce.

Add yogurt/ fresh milk instead using all Mayo to reduce calories and thickness.

Pickles add crunch and flavor to the sauce.

You can use dill pickles, but I recommend switching to pickled jalapeno instead of common pickles.

Japanese ginger pickles also give you a unique sweet flavor.

If you want to make it more Japanese-like, use Japanese pickles such as Takuan, Fukujinzuke, etc., which I explain below.

It’s quick, easy to make, and much better than anything you can buy in a jar!

Let’s break down what’ll you need to make this chunky tartar sauce.

Everyone knows Kewpie mayonnaise, the staple Japanese-style mayo worldwide. But do you know why Japanese mayonnaise is so good and what the differences are? There are many mayonnaise lovers in Japan and they are so proud to live in the mayonnaise wonderland, of Japan. On this site, I, the native Japanese introduce not only Kewpie but also other products such as Ajinomoto, and Kenko which are available on Amazon, and also, a few domestic products that you can get only in Japan!

*Japan is a “mayonnaise” wonderland

Kewpie mayo has become increasingly popular in the U.S. and other countries in recent years, but, it’s the staple mayonnaise, more than it, no less than it in Japan.

Kewpie has 60% of the market share in Japan and was also the first company that produced mayonnaise products in 1925.

The amount of eggs handled by Kewpie is about 250,000 tons per year, which is equivalent to 10% of the domestic production.

It’s richer, creamier, and smoother, with a little vinegary and custardy texture. As I said, the bottle cap that I love is handy and fun to use.

It is not necessary, but, you can’t miss these chunky chopped hard-boiled eggs in the tartar sauce.

Start boiling eggs in cold water for over 15 minutes.

Here is the guide on how to make your favorite hardness yolks if interested.

Using a vegetable chopper is up to you, personally, I chop boiled eggs with a knife since I like roughly chopped eggs and also want to leave the yolks in chunks.

Cut a hard-boiled egg in half and take out a yolk, then, chop up the whites.

Even I don’t chop the yolk since it’ll break up automatically in the mixing process.

I can see this in only Japanese cooking so far soaking minced/sliced onion in cold water to remove the sharp onion flavor, but, I think because yellow onion is popular and available thought the year in Japan.

Here, in the US, you can get red onion or sweet onion which has a less sharp flavor, so that you can skip “this process”.

However, it is helpful if you don’t like fresh sharp onion flavor.

My husband doesn’t like its flavor so he often uses minced shallots.

Also, chives or scallion will be substituted for an onion.

To make creamy, zesty, crunchy tartar sauce, you’ll need bits or lots of pickles in it.

Add several different kinds of to your tartar sauce such as authentic dill cucumber pickles or my favorite sliced jalapeno.

Yet, I recommend adding Japanese TSUKEMONO pickles, when you don’t want to add a more rich sweetness to the sauce.

Japanese pickles are called “TSUKEMONO” (OTUKEMONO/ OSHINKO), the most popular TSUKEMONO are probably, “Umeboshi”, “Fukujnizuke”, “Takuan” or “Gari”, you may have already known. The pickled vegetables become unique textures and flavors and are non-habit. And Japan has an amazing pickling culture packed with a wide variety of pickles.

The iconic crispy crunchy Japanese pickles are pickled Daikon radish. It is a traditional and popular daily side dish or snack for tea time.

Daikon radish is dried and pickled in a mixture made of mainly rice bran, sugar, and salt, then fermented for a few weeks.

It can give a super chunky, sweet, and salty flavor and texture to the tartar sauce.

It can give a super crunchy, sweet, and salty flavor to the tartar sauce. Commonly, it is used for homemade tartar sauce in Japanese home cooking alternative for dill pickles.

Fukujinzuke is also a popular Japanese pickled vegetable and is often served with curry and rice in Japan.

Major vegetables made of Fukujinzuke are chopped daikon radish, eggplant, lotus root, and cucumber and pickled in a base that is flavored with soy sauce.

It is similar to FUKUJINZUKE but it is made of semi-dried cucumber only.

Seriously, you can make these homemade semi-dried cucumber pickles easily.

You can dry them in the sun just for half a day. The semi-dried cucumber will be greatly sweeter and has a unique crunchy texture.

*HOW TO MAKE JAPANESE CUCUMBER PICKLES

Umeboshi is known for the traditional Japanese plum Pickled With Shiso Perilla and is extremely sour.

This sour taste chemically brings sweetness aftertaste and can give the tartar sauce a unique and refreshing taste that is more Japanese-like.

You can get UMEBOSHI products easily by throwing money to AMAZON (but thank you), yet, it is actually easy to make with applicants from scratch.

This pickled ginger is not the same thing as the sweet ginger called “Gari” you get at sushi places.

It is not essential but traditionally chopped curly parsley goes into tartar sauce in Japan.

Should be curly parsley?

Nope, just because Italian parsley is not common in Japan.

Besides, you can use cilantro, chives, dills, tarragon, or whatever you like.

These herbs can give fancy color and refreshing flavor to the tartar sauce.

You can use 100% mayonnaise without a problem, I use 1/4 cup of yogurt to reduce calories and make the sauce smooth.

Milk would be substituted yet add a small batch each time to check out viscosity.

How Long Does Tartar Sauce Keep?

To store this Japanese tartar sauce, keep it covered and chilled in the refrigerator.

It should be consumed within 2-3 days since it contains yogurt, fresh minced onions, and boiled eggs. 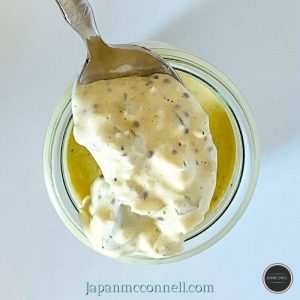 Rico McConnell
This easy homemade Japanese tartar sauce is better than anything (especially you're hungry) you can buy at the store. It’s creamy, refreshing, kicking, filling, and perfect for serving next to your favorite deep-fried dishes and sandwiches. Mayonnaise provides the whole balance of flavor in this tartar sauce. For the best tartar sauce, (and this recipe is made with Japanese mayo,) you've gotta try Japanese mayonnaise. Pickles add crunch and flavor to the sauce. You can use dill pickles, but I recommend switching to pickled jalapeno instead of common pickles. Japanese ginger pickles also give you a unique sweet flavor.
Print Recipe Pin Recipe
Prep Time 10 mins
Cook Time 10 mins
Total Time 20 mins
Course Sauce
Cuisine Japanese
Servings 4 servings

Reicpes To Use Your Tartar Sauce

Everybody loves Panko shrimp from kids to adults all over the world. We have of course Panko shrimp in a popular Yoshoku dish in Japan, called Ebi Fry, which is generally served with shredded flat sweet cabbage and Japanese chunky tartar sauce. My Panko Shrimp are crispy and crunchy and have no fishy taste at all. For a great appetizer, party dish. *Recipe

This lamb burger is NOT GREEK STYLE, and it’s the AMERICAN classic cheeseburger style. Your favorite soft bun, juicy meaty patty well-seasoned with exotic spices, caramelized onions & mushroom, and your favorite sliced cheese. You just make the patties, grill them up, and enjoy. *Recipe

It’s time to tuck into some serious Japanese-style soul food. You’re going to love how crispy and flavorful Japanese KARAAGE CHICKEN is! Marinate chicken in soy sauce-based seasonings, and coat them with rice flour. Fry coated chicken at 320F, and double-dry them at 350F. *Recipe

A crispy Panko breaded fried Japanese pork cutlet. This Pork Tonkatsu recipe is simple, easy, crispy, tender, and delicious! Using Japanese Panko, Crispy on the outside, and juicy and tender inside. *Recipe

The Heart Of Japanese Fermented Food, Koji Rice| How To Make Shio-Koji

Bok Choy 101: How To Cook Bok Choy In Japanese Cooking