Learn how to make this absolute authentic teriyaki sauce recipe from the native!

The best homemade teriyaki sauce is SO much better than the bottled just super-sweet kind.

It’s thick, sticky, sweet, and has a no-comparison rich flavor, making it the perfect glaze over beef, pork, chicken, salmon, veggies, and more.

You’ll never go back to store-bought once you make this and you’ll know American teriyaki sauce was twisted a big time.

So if you love restaurant-grade/ Japanese authentically teriyaki sauce, then stick to this recipe of only 4 basic ingredients, without MIRIN.

In other words, you can go back to other recipes that are arranged to your cultural preferred taste.

By adding dried kelp to teriyaki sauce, the vegetable amino acids of kelp produce a synergistic effect of umami with any other food, but, especially, meat and seafood.

It’s actually a chemically based technique!

Honestly, you can make Teriyaki sauce with those ingredients.

However, this recipe brings so much better taste with a rich Umami flavor.

Rishiri kelp is harvested mainly in the northern Hokkaido area (Rishiri Island, Rebun Island, Wakkanai region, etc.)
It is dark brown and has dried harder than other dried kelp. The soup stock is clear with a rich aroma and also goes well with bonito dashi broth. It is especially popular in Kyoto cuisine.

Dried kelp called “Kombu” / “Dashi Kombu” is mainly used to make Dashi broth in Japanese cooking. It has a subtle but great savory (Umami) flavor when adding dishes such as soups and stews.

“Dashi” is the basis of the taste of Japanese cuisine. “Dashi” is characterized by its rich and gentle “umami” even if it is hidden in other seasonings.

The kelp is rich in glutamic acid, which is a plant-derived umami component. It has also rich in calcium and iron, minerals and helps to boost the immune system.

Note that Dashi Kombu is different from eatable Kombu (kelp.) Make sure it is “Dashi Kombu”, not a regular edible Kombu before purchasing.

A high-quality, rich soybean flavor, this organic soy sauce is free from all preservatives and artificial flavors.

Soy sauce is very high in sodium as you know, you can use low sodium soy sauce instead. (Yamasa Low Sodium Soy Sauce)

However, the teriyaki sauce will not be last longer compared with the sauce made of regular soy sauce.

It’s better to consume within 1 month if you use low sodium soy sauce.

You can see many Japanese recipes that require “Mirin” in their ingredient, as I said, most of the other Teriyaki sauce recipes ask you to use Mirin/ sweet rice wine.

Don’t worry, I don’t use Mirin at all in my recipes.

I have been cooking without Mirin for about 18 years, I haven’t had a problem so far.

Mirin is called rice wine in English, a traditional condiment made from glutinous rice, koji rice, and distilled liquor, and aged for 40 to 60 days.

It contains about 14 percent alcohol and adds a mild sweetness, mellow rich flavor, and a shiny glow finish.

In other words, you can easily find a substitute for Mirin for the purpose of adding sweetness and rich flavor.

What To Use If You Don’t Stock Mirin

If you want to minimize condiments in the kitchen pantry, you don’t have to buy Mirin just for Japanese cooking.

Actually, Mirin can be substituted by common ingredients that you may already have in your kitchen. To make 1 tablespoon of Mirin,

Please, please, do not use “Rice vinegar” as the substitute for Mirin. It’s a completely different condiment.

What Is Different Between Yakitori And Teriyaki Sauce

Both sauces are made of Soy sauce, Japanese Sake, Mirin, and Sugar.

Technically, there is no difference between “Teriyaki” sauce and “Yakitori” sauce in home cooking.

Simply speaking, Yakitori sauce is categorized in the Teriyaki sauce.

The same raw materials and in the same category, so why do we use different names?

It’s likely based on the purpose and hidden flavor.

For example, we call Yakitori sauce the sauce used for Yakitori chicken.

Besides, the specialty restaurants such as Yakitori restaurants or grilled eel restaurants, use the same sauce for decades to decades.

Actually, they dip grilled chicken or grilled eel into the sauce so the flavor from the food infuses into the sauce, which becomes more than Teriyaki sauce.

So, we call Yakitori sauce or Kabayaki (grilled eel) sauce for that situation.

By the way, Teriyaki sauce (also teriyaki flavored dishes) in the US and other countries is a completely different taste from authentic Japanese flavor.

Therefore, in Japan, imported teriyaki sauce (such as Yoshida sauce) is often referred to as “gourmet sauce”.

How To Make The Authentic Japanese Teriyaki (Yakitori) Sauce

Since Teriyaki sauce is made of soy sauce, sake, and sugar, which has a high salt concentration and a low pH value, it likely doesn’t go bad so soon.

Rest homemade Teriyaki sauce in a fridge overnight before serving since the taste will be so much better.

This homemade teriyaki sauce will be kept for 2-6 months (as a guide) in the fridge.

Please let it cool down completely before refrigerating.

Besides, it’s better to consume within 1 month when you use low-sodium soy sauce.

You can also freeze the sauce, and consume it within 1 year.

You may wonder the sauce will not be thick enough just after made, but it’ll be thicker the next day.

Rico McConnell
The best authentic restaurant-grade TERIYAKI sauce, with only 4 ingredients, without MIRIN! A sticky sweet and rich umami taste, making it the perfect glaze over yakitori/ teriyaki chicken, salmon, and more. Once you make this easy but absolute-authentic Japanese essential sauce, I guarantee you won’t buy a bottle in a grocery store again like you're Japanese.
Print Recipe Pin Recipe
Cuisine Japanese
Servings 2.5 US CUPS

Teriyaki Sauce 2 For Who Doesn’t Have Japanese Cooking Essentials

You may wonder the sauce will not be thick enough just after made, but it’ll be thicker the next day.

If you want to make your sauce even thicker, you can reheat the sauce and add arrowroot powder or cornstarch solution.

Then stir it into the sauce when it’s nearly done simmering. 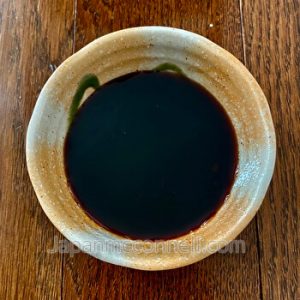 Rico McConnell
Make Homemade Japanese-style Teriyaki Sauce using ingredients you already have at home! Teriyaki Sauce 2 is a recipe that doesn’t require special Japanese cooking ingredients. If you want to make your sauce even thicker, you can reheat the sauce and add arrowroot powder or cornstarch solution.
Print Recipe Pin Recipe
Cuisine Japanese

The Masu Sake Cup; The Unique Japanese Sake Serving Style, How To Enjoy It?

Nikiri: How To Burn Off Alcohol In Japanese Cooking?