The native guide; All about unique Japan Do you know the STOP sign in Japan? | Japanmcconnell
Home
Travel Guide
Sponsored Link

Do you know the fact that the number of car accidents caused by international tourists has been increasing recently in Japan?

The most likely occur car accident during traveling around Japan is misunderstanding the Japanese “STOP” sign.

This is a “STOP” sign in Japan. Yes, you are familiar with its color and shape as same as road signs in your countries- “Yield” or “Give way” signs.

The Japanese “stop” sign is an upside-down triangle as you see above.

Also, the former type of “STOP” signs are written in Japanese Only- “止まれ” means literally “STOP”.

When we traveled to France and Montreal, Canada, we remember we got so nervous because we can’t read French!

The same situation would happen to international drivers in Japan, and the sign looks like “Yield” and “Give way” signs. You can imagine what will happen…

The Japanese government has been moving to exchange the old type “STOP” signs to new “STOP” signs written in English since 2017.

The first couple of years, you could still see old type “STOP” signs in small population areas in the countryside, but I saw new “STOP” signs even in my home town (which is a rural area in Gifu) so I am hoping that the exchange project has completed. 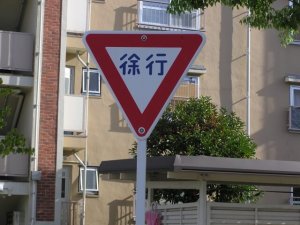 This is a kind of “Yield” sign in Japan, but the definition is a little different from “Yield” signs in the US- You must slow down when you see this sign.

The Japanese road sign of “Slow Down” (徐行, Joko) is defined as “let speed down enough to vehicles allows stopping immediately.” It is mainly installed in residential areas, school zones, and narrow roads.

So what is “the speed at which you can stop immediately”?

According to the Drivers’ Manual, the distance from when the brakes are applied to when the vehicle stops completely is within 1 meter / 3.2 feet, and the speed is estimated to be less than about 10 kilometers/ 6.2 miles per hour.

However, you need to slow further down depends on the situation. For example, the response for stepping a break pedal differs from person to person, and the required distance for the complete stop differs for each vehicle. Also, it depends on road conditions such as wet, frozen, and steeping. 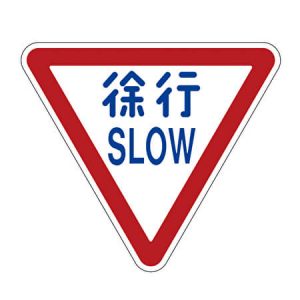 The “Slow” sign has also been reinstalled with a new design written in English. It’s similar to “Yield” but you need to really slow down (about 6.2 miles/ hour and less like I said.)

Drive On The Left Side Of The Road In Japan

It is not about Japanese road signs, however, another major cause is driving on the opposite side to them. As you know, vehicles must drive on the left side of the road in Japan.
They unconsciously go into the right lane after making a turn at intersections. In the worst case, it will cause a big accident to lose someone’s life.

Make sure you are proceeding to the correct side (the left side) especially when making turns.

This post will tell you important traffic rules and regulations in Japan.

Japan Driving Rules; 16 Things You Should Know About
Understand the important Japanese traffic rules and regulations. In Japan, you must be over 18 years old and need requirements to drive a car in Japan during your trip. Driving in Japan may be easier than driving in London, most (not all) drivers are gentle and polite, lanes are organized. However, traffic signs are different from your country and many signs are still written in Japanese. Also, you must pay attention to pedestrians and cyclists. In this article, I will introduce some important traffic rules in Japan that help driving safely for your Japan trip.

Behinds Of Car Accidents By Overseas Visitors In Japan

I talked about two major causes of car accidents by overseas visitors during their trip, yet, the increase in car accidents is not just their fault.

However, there is a dilemma that overseas customers don’t get enough guides from them due to the lack of English speakers (or other languages) besides the language barriers.

Unfortunately, there are some facts that some agencies refuse overseas customers because they can’t provide traffic guides in their languages, but it’s a little better as the point of saving the life than some bad agencies lend them even without sufficient traffic rules and regulations.

Moreover, It is not only the risk of your life but also the insurance claim trouble between the assailant and the victim in case of accidents happen.

To reduce car accidents and troubles involved with overseas drivers, the “All Japan rent-a-car association” and Japanese insurance company started promoting several measures such as

To enjoy your road trip in Japan, you don’t want to miss out on what most causes car accidents during traveling around Japan.

If you visit only metropolitan cities such as Tokyo, Osaka, Kyoto, Hiroshima, Yokohama, Fukuoka, Sapporo, and other cities developed public transportation networks, personally, I don’t recommend driving a car in cityside. Many things bother you a lot such as busy traffic, hard-to-find parking lots and expensive, narrow roads, many one ways, and complex lanes.

The fuel costs high in Japan, highways are not freeways and pricy.

It still can be worth traveling by car such as with kids, a group, and visiting rural areas, besides it is almost impossible to travel around Okinawa and Shikoku without rent-a-car.

If you are planning to drive in Japan, please learn about Japanese traffic rules and what overseas visitors are likely to make mistakes in Japan.

Japan Driving Rules; 16 Things You Should Know About
Understand the important Japanese traffic rules and regulations. In Japan, you must be over 18 years old and need requirements to drive a car in Japan during your trip. Driving in Japan may be easier than driving in London, most (not all) drivers are gentle and polite, lanes are organized. However, traffic signs are different from your country and many signs are still written in Japanese. Also, you must pay attention to pedestrians and cyclists. In this article, I will introduce some important traffic rules in Japan that help driving safely for your Japan trip.