The Chugoku Region makes up the western part located between the Kinki region and Kyushu island. In detail more, there are two parts of the Chugoku region, but let it leave behind today.

The region is mainly known for the city of Hiroshima, but the region is located on the “golden route”- along the Tokaido Shinkansen line which is packed with the most popular sightseeing cities in Japan such as Tokyo, Osaka, and Kyoto.

Indeed, Kurashiki in Okayama, Hiroshima city, and Miyajima are easy to access from Osaka by Shinkansen.

When you have a Japan rail pass, you should visit the Chugoku region.

According to my Japanese winter guide, the Chugoku region on the Seto Inland Sea side should not be considered a cold winter region, but it is relatively cold (almost the same in Tokyo). Tottori and Shimane are affected by the cold air from the Sea of ​​Japan.

Let’s dive into what the winter like in each prefecture. 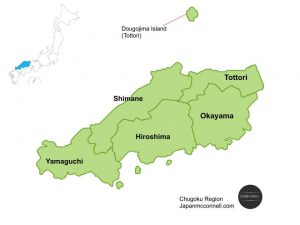 The Quick Guide Of Tokyo's Winter; Winter Basics In Tokyo For Women
Check out Weather, Clothing, and Travel Tips in Tokyo during the winter season (Dec - Feb) in each month. Packing List for travel divas! Tokyo winter is moderate cold and also very dry! Read this post to get some ideas for your packing!

Rich nature, especially, You will be impressed by the beauty of the Sea of ​​Japan seen from the dunes. At Mt, Daisen provides tourists not only with summer hiking but also a winter ski resort.

As the representative of Cool Japanese culture, there is a sacred place “Mizuki Shigeru Road”-like an open-air museum which more than 150 youkai created by him are scattered in the city, and another popular spot is the museum of Gosho Aoyama, the original author of “Detective Conan”.

What To Wear In Tottori’s Winter

Tottori Prefecture is located in the western part of the main island, but because it faces the Sea of ​​Japan, it is very cold in winter, and the sea breeze instantly makes you chilled. It often snows, so bring your winter essentials.

Shimane Prefecture is located in the northern part of the Chugoku region and is a historical area with many shrines and archaeological sites as a mythological stage. The prefecture is also rich in nature as well as Tottori has.

Popular tourist destinations such as Lake Shinji and Nakaumi are ideal spots for bird watching, and you can enjoy many waterfowl. From the westernmost coastline of the Shimane Peninsula, you can experience the mythical history of Izumo along with a spectacular view of the setting sun over the Sea of ​​Japan.

The traditional performing art “Iwami Kagura”, which has been passed down from ancient times, is full of entertainment and you can enjoy the dynamic dance.

Matsue City is known for Japanese traditional sweets alongside Kyoto and Kanazawa, and many visitors enjoy seasonal Japanese sweets with green tea.

What To Wear In Shimane’s Winter

Winter is characterized by a climate on the Sea of ​​Japan side, which is a lot of rain and snow. Izumo and Matsue in the eastern part of the prefecture are very cold. Weather conditions may vary depending on the area of ​​Shimane prefecture, so please check the weather you plan to visit.

Speaking Okayama, the spectacular view of the Seto Inland Sea can’t be missed. Great Seto Bridge, the world’s longest two-tiered bridge, the beautiful sunset on the Seto Inland Sea, the Hinase and Kasaoka Islands where are plenty of places you can fully enjoy the rich nature.

Refresh yourself in the magnificent nature of Hiruzen Plateau, which is one of the best highland resorts in western Japan. Kurashiki city, nostalgic towns are known for the historical district-enjoy the canal tour watching the unique white wall called “the Namako wall’.

Foodies, enjoy the seasonal fruit from the kingdom of fruit in Japan, and of course, the seafood from Setouchi inland sea. For connoisseurs, find Okayama-born gems such as “Okayama denim”, Bizen ware with a history of 1000 years, local sake and wine.

What To Wear In Okayama’s Winter

In Okayama in January and February, there are still cold in the morning and evening to below freezing depends on the area.
Winter boots?
No, in Okayama, where there is rarely snow, you can enjoy sneaker. (Except for going to winter sports, you know.)

As you know, many visitors visit Hiroshima for the World Heritage, Atomic Bomb Dome, and Itsukushima Shrine.

Onomichi city and a cycling spot “Setouchi Shimanami Kaido” are becoming a popular spot for traveling to Hiroshima.

When you visit Hiroshima, you can’t miss the local cuisine used lemons and oysters produced in Hiroshima, as well as Hiroshima-style okonomiyaki.

*lemons and oysters, which Hiroshima produces more these than any other region in Japan.

It is recommended to visit to feel the seasonal scenery of Japan,
Sandankyo Gorge, Taishaku Gorge, a vast Japanese garden in Hiroshima City, Shukkeien.

What To Wear In Hiroshima’s Winter

During the winter, average temperatures fall below 10 ° C and the lowest can be below freezing. It rarely snows in Hiroshima.

Yamaguchi Prefecture is called “West Kyoto” and is known for its beautiful scenery such as Tsunoshima, Senjojiki in Nagato City, and Omi Island. There are attractive spots such as Akiyoshido, one of the largest limestone caves in Japan, and the clear blue-green Beppu Benten Pond spring water.

Since the prefecture faces the Sea of ​​Japan, is rich in seafood, and is especially famous for blowfish dishes. Don’t forget the unique local delicacies, such as tile soba!

What To Wear In Yamaguchi’s Winter

The average temperature is about the same as in Tokyo. Although the prefecture is on the Sea of ​​Japan side, it is relatively warm, and rarely snow but lots of rain. In early December, the average highest goes around 15 ℃.
From mid-December to February, the lowest is around 2 ° C. The wind is strong along the coast, so it’s a good idea to bring winter accessories.

Where To Visit In The Chugo Region’s Winter