Sesame seeds are often used in Japanese home cooking, as well as European and Asian countries.
How has sesame been to get to Japan?

The origin of sesame is said to be Africa.

About 6,000 years ago, Africans found wild sesame seeds and cultivated them as food. In ancient Egypt, sesame oil was also used as a fuel, fragrance, medicinal and mummified preservative. Cleopatra applied sesame oil as beauty skincare. Sesame seeds had crossed the Mediterranean Sea to Central Asia and India, sesame oil is still used in the traditional medicine “Ayurveda”.

Then, sesame spread to China and Japan later.

In Japan, when Buddhism was introduced and meat-eating was taboo, sesame played a role in supporting the Japanese diet as a high-protein food alternative to meat.

Overview Of Nutritions In Sesame Seeds

The types of sesame are roughly divided into three types in Japan-white, black, and golden.
The two most popular sesame seeds in Japan are white and black, and gold is known as the luxury type.

Have you ever thought about the difference among “white sesame”, “black sesame”, and “golden sesame”???

Nutritions are almost the same among the three types of sesame, although there are slight differences in the amount contained in components.

However, the taste is different, so it may be better to choose depending on the dish.

Sesame seed contains 50% lipids, 20% protein, about 20% are carbohydrates, the rest is vitamins, minerals, and dietary fiber.

“Unsaturated fatty acids” are known for their ability to boost immunity and lower cholesterol levels.

The greatest thing about sesame seed is that it is rich in high-quality nutritional ingredients and high in content.

Sesame seeds are rich in unsaturated fatty acids that cannot be synthesized by the human body.

Especially, they are rich in linoleic acid and oleic acid, and proteomic acid, stearic acid, and tocopherols (vitamin Es) are following.

“Linoleic acid” is a material that makes cell membranes and also it is an essential fatty acid that cannot be synthesized in the body and must be taken from the diet.

It is said *linoleic acid itself plays a special role in support of heart health and it can be expected to reduce total and LDL cholesterol. There is also said that linoleic acid improves blood pressure. (*1)

Sesame seed is also high in iron and calcium. Not only does calcium make healthy bones, but also expected to be prevention for osteoporosis.

When Sesame protein and soybean protein are combined, can help each other by supplementing deficient amino acids in each other and further increasing nutrition value.

Essential amino acids are essential components for cell metabolism, stabilization of liver function, and regulation of blood cholesterol. So, try to eat sesame seeds with soybean products such as tofu, soy milk, miso.

They found sesame lignan has antioxidant components such as sesamin, sesaminol, and sesamolin, which are said to have anti-aging effects.

Also, according to *NARO Research has revealed effects such as improving liver function, reducing cholesterol, and promoting lipid metabolism.

Besides, there are possibilities that sesame lignans can be expected excellent health benefits such as suppressing the activity of active oxygen that impairs health, lowering cholesterol, preventing aging, and promoting the decomposition of alcohol.

Sesame seeds in Japanese are “Goma”(ゴマ). 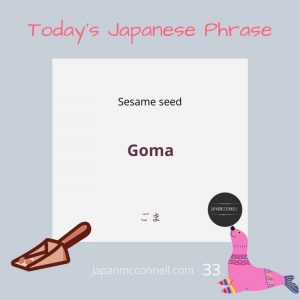 In Japanese cuisine, sesame seeds are often used as the essential ingredient.

The golden sesame seed is also called “Yellow sesame seed” or “Brown sesame seed”, which is known for its luxury aroma and flavor, so it is often used for “Kaiseki cuisine”-the Japanese traditional high-class cuisine.

White sesame is cultivated in temperate and subtropical regions and is produced all over the world like Africa and Southeast Asia.

In Japan, white sesame is the most produced in the Japanese sesame market since they are rich in oil than a black sesame seed. As you see, white sesame seeds are the raw material of sesame oil.

Also, white sesame has a sweeter and moderate taste. Therefore, they tend to be used in seasonings regardless of the dish.

Unlike white sesame, black sesame is not produced all over the world, but China and Southeast Asia are the main production areas.

The black color of the shell contains the same polyphenol pigment called anthocyanin as blueberries, and lignin, which is a type of insoluble dietary fiber.

Besides, black sesame seeds contain a higher amount of calcium due to their thicker shells compared with white and gold.

Black sesame seeds have a stronger flavor and aroma than white sesame seeds so can insist on its flavor so it is used for dishes and sweets that enhance sesame seed flavor.

The golden sesame seed is also called “Yellow sesame seed” or “Brown sesame seed”, which is known for its luxury aroma and flavor, so it is often used for “Kaiseki cuisine”-the Japanese traditional high-class cuisine.

In Japanese home cooking, we often use sesame as a ingredient, a garnish, a condiments, a decoration, and a sauce.

Eating several different items in a well-balanced manner in a day is the basis of Japanese healthy diet guidance.
However, it is not so easy thing to do so in our daily busy life.

Thus, we often use sesame seeds in home cooking because it is simple, easy, and well-balanced just adding a tablespoon of sesame seeds which are rich in unsaturated fatty acids, high-quality protein, dietary fiber, iron & calcium, and vitamins! 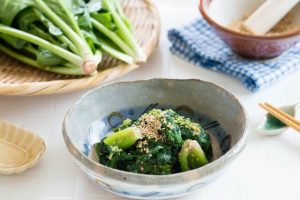 When someone asks me “what’s the staple food used sesame seeds in Japanese home cooking,” “Goma-ae” (胡麻和え) is my first answer for it.

Also, you can add chicken breast or canned tuna as protein.

As a basic point in making Goma Ae,

You can choose sesame seeds in roasted, ground and even a paste is fine.

Roasted sesame seeds give a crunchy texture and fresh sesame flavor to every bite.

When sesame seeds are ground, more aroma and flavor will be popped out. Moreover, nutrition absorption value becomes better than whole seeds because their hard skin is milled in small pieces. When using ground sesame for making Goma-ae, it will combine well with veggies and give the dish more sesame flavor compared with using roasted sesame.

Goma-ae will be mild and naturally sweet with sesame paste. Especially, use a paste when the main ingredient has a unique habit, the paste can suppress with a mild nutty flavor.

In this post, you can get more details about sesame products-roasted, ground, and paste. Beside, I will give you two kinds of Japanese sesame dressing recipes!

Japanese Sesame Seed Products Guide; Irigoma, Surigoma, Nerigoma
Sesame is often used in Japanese cooking. Roasted, ground, paste, and sesame oil, nutrition values are almost the same in the sesame products, but you can upgrade the taste of dishes when you use them properly depends on the dish. Roasted whole sesame gives you crunchy texture and strong flavor every bite, ground sesame has a strong flavor and aroma, a paste can be easily enhanced sesame flavor in dressing and soup. In this post, I will introduce all the popular sesame products in Japan.

This is a goma-ae recipe using Napa cabbage. 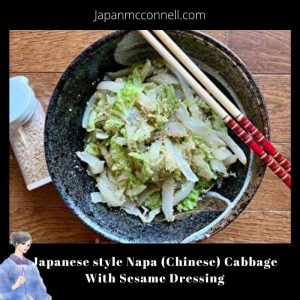 Rico McConnell
Goma Ae is a traditional Japanese side dish with blanched Hakusai Napa cabbage tossed with a nutty toasted sesame sauce. This vegetable side dish is a super healthy delicious that goes great with any meal: grilled meat, seafood, soup, and stews. Even for the healthy nibble for drinking.
3.75 from 4 votes
Print Recipe Pin Recipe
Course Side Dish, Snack
Cuisine Japanese
Servings 4 people

©Japanmcconnell/Rico McConnell- Content and photographs are copyright protected. Sharing this recipe is both encouraged and appreciated. Copying and/or pasting full recipes to any social media is strictly prohibited.
Keyword chinese cabbage, Easy, Healthy, Hondashi, Izakaya, Nibbles, sesame seeds, Vegetables, Vegetarian
Napa (Chinese) Cabbage 101 In Japanese Cooking; Nutrition, Shopping and Storage Tips, Recipes
Napa cabbage is the type of Chinese cabbage and called "Hakusai" in Japan. It's the popular winter veggie (in Japan) and it can't be called Japanese hot pot without it. (kidding.) It contains mostly water (low-cal, low-carb) but is rich in Vitamin C, K, and potassium. Moreover, it's one of the handy veggies to cook for salad, stir-fry, saute, soup, stew...between crispy texture to melty texture. Read this post to know health benefits, the shopping, store, and cooking tips.

These colors are not so attractive, but some people are addicted to sesame sweets.

Personally, I am not a big fan of too much black sesame seeds (paste) flavor in sweets, 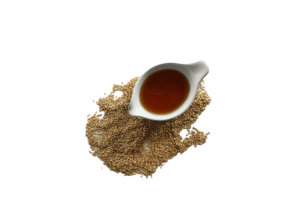 Sesame oil is also the daily use of Japanese cooking.

Sesame oil which is also known for the health benefits and rich aroma is also daily use in Japanese home cooking as well as seeds.

Besides, sesame oil is recommended rather than seeds considering taking sesame lignans.

In my life, this is THE BEST sesame oil so far!

I couldn’t forget my impression when I tasted this first, with its scent, aroma, and very rich flavor.

100% pure sesame oil, you will notice the dark roasted color more than any sesame oil first when you pour in the plate.

This is the “staple sesame oil” produced by “Kadoya Sesame Mills” (かどや製油), an cooking oil company founded in 1858. It is a nice mild and clear but remains rich flavor and sesame aroma that you can use for any dish as cooking oil or dressing oil.

Roast selected sesame seeds carefully with the unchanged own process for 160 years, it is attractive that the price is reasonable although it is pure sesame oil. Recommended as sesame oil for daily use.

How about taking daily 1 tbsp of sesame seeds or sesame oil for your health?

I realize how good health benefits sesame seeds have, so I start adding sesame seeds for the breakfast smoothie!

The Native Guide: What Do You Want To Know About Japanese Hamburg Steak