Everyone loves the iconic ramen topping, “Chashu”, especially, one made by rolling pork belly.

You think it’s a little hassle to make Chashu from scratch at home?

I am telling about “easy chashu pork” with a few steps in those posts, today, I am going to tell you about homemade Japanese chahsu with the authentic method.

With these tips in this post, melty fatty savory pork belly will be your favorite recipe!

There are many recipes around, but, here are the basic ingredients to make Chashu at home.

For the Chashu sauce,

Leave the meat out to room temperature to cook the meat evenly.

Take it out of the refrigerator 30 minutes before you start cooking.

Place plastic wrap on the meat and pound it with a rolling pin (*this process also makes the meat tender).

Meanwhile, season it with a pinch of salt (and black pepper optionally).

Surprisingly, cooking the meat in vegetable oil can be expected to cook off fat from the meat.

(*However, there is no certain study while I researched. )

Yet, you’ll find out how much pork fat cooked off after searing the meat in vegetable oil.

Sear the meat over medium heat until it turns golden brown. (it is called the Maillard reaction which is the golden color that adds the savory flavor. )

Just be aware of splatting fat! I usually cover the skillet since the fat oil make mess (a lot).

To remove more extra fat and scum which cause the gamey flavor in the pork, complete the preparation with parboiling although the pork belly will be cooked in the sauce later.

Place the pork belly in a large pot and cover it with enough water.

Bring the water to a boil over high heat, then, reduce the heat to low, and simmer it for 1 hour.

Just avoid cooking the meat though over high heat since it’ll be tough and dry. Also, add water to keep covering the meat all the time if needed.

Other Tips What You Want To Know

In Japanese cooking, we often use leeks and ginger to remove the unpleasant taste in the meat and also add flavor to the dish.

It’s just common ingredients available all-year-around in Japan and makes sense to use them for cooking.

You can use onions or scallions instead of leeks, even you can add celery if you like. (the flavor may change a little.)

In my opinion, leeks are not cheap where I am living in the US now. (comparing that I could get one with a reasonable price in the UK.)

When I find fresh leeks fortunately at Walmart (because it is a reasonable price), I get a few leeks and store them properly to keep them fresh longer.

Also, I don’t want to waste green parts which make savory soup or sauce so I keep them in a freezer.

Read this post on how to store the leeks fresh longer in a fridge as well as other root vegetables.

The benefits of using Otoshibuta in this recipe,

You can get an actual Otoshibuta to read this guide, or you can use kitchen paper, parchment paper, or aluminum foil.

I explain how to make Otoshibuta with kitchen paper shortly, jump to this post if needed. 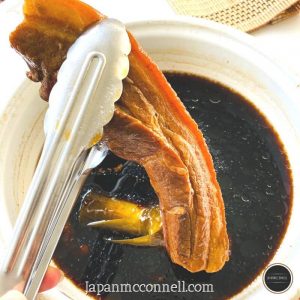 How To Tie The Pork Belly (Optionally)

If you want to entertain your guest, you can roll and tie pork belly for the beautiful round-shaped Chashu.

Salt the pork belly and make a shallow cut on the meat side to roll it easier.

Place the fat side on a cutting board, find whichever thinner side, and start rolling up the meat.

Don’t forget to set aside ties before rolling the pork belly.

Honestly, you can tie it any way unless the pork belly keeps holding the shape while cooking if you don’t know how to tie the meat with a butcher’s knot since it is not for the presentation but also need to keep the meat rolled.

Yet, I show you how to tie the meat in my way in this post, check it out later if you’d like.

Use The Chashu Sauce For Another Cooking

Save the sauce for another time to make the Chashu pork or use it for other cooking recipes.

I always save the sauce in the freezer after putting the sauce in a freezer bag and also put it in a container since the sauce will not be frozen completely and sometimes leaks from the bag.

Add the sauce to other dishes for season/marinade, such as

The simple and easy fried rice seasoning with the Chashu sauce. You can also add Chashu pork leftovers! Sprinkle black pepper to finish!

Add 1-2 tbsp of the sauce after adding the rice, then, continue stirring the rice with the tips that I am telling you in this post. (*Chahan recipe is also in the same post.)

It’s time to tuck into Japanese-style soul food. You’re going to love how crispy and flavorful Japanese KARAAGE CHICKEN is!

*Marinate chicken in the Chashu sauce, and coat them with rice flour.

TAKIKOMI GOHAN is savory Japanese mixed rice, which the rice is cooked with soup, seasonings, and vegetables.

This is one of the traditionally popular comfort food in Japan, oyster sauce in the chashu sauce gives this traditional Japanese rice rich twist.

It absolutely looks fancy, go for a party or holiday dinner.

In this recipe, I use roast pork leftovers, so! you can substitute Chashu pork!

Add 5 tbsp of the Chashu sauce instead of sake, soy sauce, and oyster sauce.

How To Make Authentic Shrimp Tempura , Not Fritter, With Tempura Batter Mix