When I was going through Japanese Tamagoyaki recipes on many websites, I am thinking it differently from those.

First of all, I don’t think that you need to buy Tamagoyaki pan even to make the traditional Japanese rolled egg omelet.

(In fact, I don’t use Tamagomaki pan frequently.)

Although it will need to take a few practices to get it perfect, you can make a Japanese rolled egg omelet when you use a non-stick small frying pan.

Back to the topic, Atsuyaki tamagoyaki isn’t a traditional tamagoyaki egg called “Dashimaki Tamago”, you can absolutely skip the steps like folding over and over and the delicate process to make my Atsuyaki Tamago.

Even better news: Since it is not the Dashimaki Tamago, we don’t need the delicate Dashi broth, Mirin, even soy sauce.

(Well, you can season it with soy sauce if desired. )

So, it is not the post you’re looking for if you want to make the authentic Dashimaki tamago or Tamagomaki.

As the title suggested, this recipe is about how to make a Japanese popular yet easy thick egg omelet toast sandwich.

, which is also my hubby’s favorite breakfast.

This impressive sandwich idea is said that originated in Kyoto, and it’s a popular menu at classic Kissaten (a coffee shop).

Therefore, I use chicken soup powder such as Knorr, you can use Hondashi powder instead.

To get the taste close to the authentic and it is called “Japanese Tamagoyaki Sando”, I definitely want you to use Japanese “Syokupan” bread for this recipe.

I know, it is hard to find it in the US.

This bread is fluffy, moist, and butter-rich flavor goes well with the fluffy jumbo omelet and it’s the exact taste that I have at Kissaten in Japan.

Shokupan is a Japanese-style milk bread that is soft, super-fluffy, wheat-aromatic, comfy sweet, and has a golden crust.

Shokupan is made of a high percentage of milk or heavy cream to make it super-fluffy which the Japanese preferred.

Generally, it is sold from thin-sliced to Texas toast-thick sliced with square-shaped or with round-top.

Where To Buy Japanese Milk Bread

Since I live in the US where there is no Japanese grocery store, I use Trader Joe’s brioche bread or Hawaiian bread substitute for Japanese milk bread.

Surprisingly, I don’t complain anything about using them!

It’s almost the same taste as Japanese toast when you make toast bread from those kinds of bread in the US.

Since I call this sandwich called Japanese Tamoyaki sando, please use Japanese Mayo instead of butter for the toast.

Spreading Mayo instead of butter is a common sandwich technique in Japan that prevents the bread from water and adds flavor to the ingredients.

Besides, you can add Japanese tartar sauce when you’re starving!

“Atsuyaki” literally means “let something makes thick while cooking (not sauce)”, or often described as “grilled and thick”, and Atsuyaki Tamago is basically a “thick egg omelet”.

Why You Should Make My Japanese Atsuyaki Tamago Sandwich

As I said, Atsuyaki Tamago is a thick egg omelet so you don’t need the basic ingredients when you try to make Japanese traditional dashi maki tamago or tamago-maki such as,

In my recipe, you really don’t need a Japanese tamagoyaki pan since it doesn’t need to be rolled.

I use a non-stick frying pan and make Atsuyaki Tamago in a square.

So, you’ll be required little cooking techniques, don’t worry, I will tell you my tips to make a fluffy juicy egg square omelet.

To make the egg omelet fluffy, I add milk, sake, and sugar.

Ideally, I want you to use Japanese sake, but it’s optional.

When you don’t have Japanese sake, you don’t need to add white wine or other spirits.

You can use Mayo instead of milk, sake, and sugar.

Mix or whisk well the egg whites together and carefully blend them and the ingredients in with the yolks even you can use a whipper.

When you mix eggs, try mixing air into them.

Use A Small Non-Stick Frying Pan

Unless you are a professional chef, swallow your pride, use a non-stick frying pan to make fluffy Atsuyaki tamago easily.

Still, oil on the pan even you use a non-stick frying pan.

Butter can bring more flavor but it’s easily burnt, so I recommend using any kind of cooking oil if you are a beginner and when you want to make this for important people.

Besides, the small non-stick pan is better to use for the first time.

I use middle-sized frying on in my cooking video because I make this many times in my life.

However, I recommend the small non-stick frying pan to make this square Atsuyaki Tamago.

What Heat You Should Cook To Make The Perfect Atsuyaki Tamago

Heat oil/butter in the nonstick frying pan over medium/medium-low heat until hot/warm.

Shake the frying pan to coat the bottom with the oil/butter.

Note that butter gets easily burnt.

If the frying pan seems to get too hot/warm, move it off the stove and let it cool down for a while.

(*The egg mixture shouldn’t dance on the pan.)

Pour in the egg mixture at once and set the mixture until covering the bottom.

Then, turn down to the low/ medium-low heat.

Cook through the egg mixture at the temperature before the point you like, then turn off the stove.

Move the Tamagoyaki on the pan to a pot mat as soon as you turn off the stove.

Wait To Touch The Egg Until It Starts Forming

My tip is waiting to start stirring the egg mixture as soon as you add them to the pan.

Wait to touch the egg mixture until the edge attached to the wall or the center of the egg starts forming.
(It depends on your stove and your pan.)

But, don’t let it cook through completely.

Occasionally, poke or slightly stir the points where the egg mixture starts cooking to let the runny uncooked mixture touch the bottom.

When the egg mixture starts forming moderately, start gathering it to the edge of the center gently.

Tilt the pan to let go of the runny uncooked mixture to the bottom.

Occasionally, poke or slightly stir the points where the egg mixture starts cooking to let the uncooked mixture touch the bottom.

Therefore, don’t touch (scrumble/stir) the egg mixture too often before it starts forming.

How To Make The Omelet In A Square

Once the egg mixture starts forming after you gather it in one place and before fully cooking, fold up the edge into the center as much as possible you can to make it in a square.

Use the wall of the pan to hold the egg until it formed.

This is why using the small frying pan is better to make the egg omelet in a square. 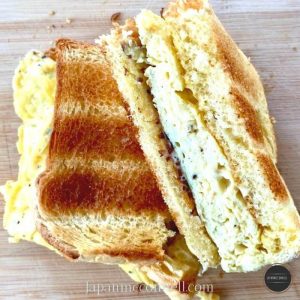 The fish market was closed on Wednesday but the super-delicious sushi place in Nagoya, Japan.