No one has problems to find Uber ride in the US, except for some small isolated town.

Even you travel to other sightseeing places in foreign countries, you can find Uber or Lyft easily.

Do you think you have no problem to find Uber or Lyft there?

If you stay in Tokyo, Yes – But outside of Tokyo, NO.

JUST UBER is available in only Tokyo.

Happy News For you!

Now, Uber aka “Uber Taxi” is available major cities in Japan such as

Moreover, the price is higher than using regular taxis.

“Uber Taxi”- that’s called in Japan, is A BIT expensive more than regular taxis because it charges “Booking (calling) Fee”.

First, you need a taxi driver’s license for being a commercial driver, generally, the system of Uber is illegal in Japan.

Secondly, the Japanese taxi and chauffeur service companies are not welcome ride-share services due to protect their businesses.

Don’t be in a panic!

However, you know that

You can hail a cab super easy in Japan, especially in popular cities. I will tell you how to catch a cab in Japan.

Well, not so much difference from cabs in your countries. I mean, you can recognize the vehicle is a cab.

You see a taxi light on the rooftop, a neon sign on the dashboard, which tells you vacant or not in Japanese-Chinese characters, a price sticker on the backseat window.

The color of the body depends on the companies, so it is not always yellow.

I don’t think it is necessary to learn which Japanese-Chinese characters mean vacant or not, because you have already too much information for your Japan trip.

I will give you hints instead. 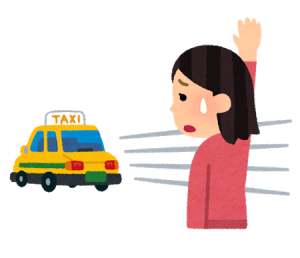 When you hail a cab, but the driver ignores you, it means the cab is not available.

Make Sure You Have Enough CASH

I believe Japan is one of the high-technology countries, but systems of a credit card have been very delayed from other countries.

Some companies don’t accept credit card payment, even though they do, international credit cards will not go through the system sometimes.

Make sure you have enough cash with you before hailing a cab.

But not like 5 years ago, we didn’t have any problem paying with our international credit card in the last couple of years in Japan.

If you want to withdraw money, you can do at 7-elven or Japan Post Bank (Yucho,ゆうちょ).

How to hail a cab? 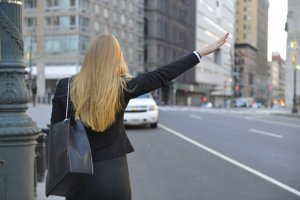 Find the busy street nearby, hail a cab by raising or waving your hand from the sidewalk.

I recommend hail a cab in the same direction where you are going to if you know, it saves a lot of money.

Do not hail a cab around a crosswalk, an intersection, and a bus stop.

The cab driver is not allowed to pool the car around these places, it’s a law.

Also, you can find a cab easily at the train station.

If you are in the countryside, you can (ask) call the cab or use the “Japan Taxi app” below.

Remember, when you call the cab, they charge you a “booking fee” about ¥200.

The door will be opened and closed automatically 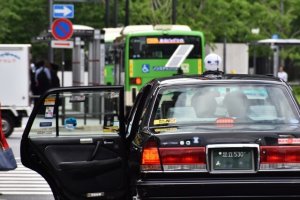 Don’t try to close and open by yourself.

The door will be opened and closed automatically.

Moreover, the driver will often do it for you. (No tip required.)

Sometimes the driver has to reopen and close the door to reset automation if you do it.

Most of the Japanese people hardly speak English.

You are really lucky if you can catch the English speaking driver.

Take a screenshot of the information written in Japanese,

in case the old driver can’t read the alphabets.

In Japan, tipping is not customary.

You just pay the exact price on the meter that the driver shows you.

In addition, it is a polite way in Japan to use small bills if you are available because sometimes they don’t have enough changes.

The fare of a taxi varies depends on companies and location.

When using a standard four-passenger taxi, it typically starts around 400-700 yen for the first up to two kilometers

In Osaka, the starting fare is 680 yen for the first 2 kilometers. After that, the fare increases 80 yen for every 266 meters.

In Kyoto, the starting fare is 620 yen for the first 1.7 kilometers. After that, the fare increases 80 yen for every 276 meters.

In Fukuoka, the starting fare is 750 yen for the first 1.6 kilometers. After that, the fare increases 80 yen for every 180 meters.

I know, I know, you want to know exactly how much cost anyway.

I have a few examples, here.

From Nagoya station to Hilton Nagoya which is about 1.4 km, it always cost around ¥1,200.

From Toyota Kaikan Museum to Toyota-shi station which is about 4.2 km, we paid around ¥2,000. 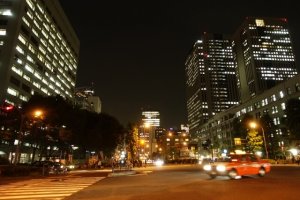 Most taxi companies add a late-night/early morning surcharge of 20-30% for rides hailed between 10 p.m. to 5 a.m

There is also the waiting for a charge,  which is the surcharge of the time such as when you let the driver wait for a while when the driver speeds down below 10km/h (6 mph) in busy traffic or waiting long a light.

Some companies charge you a booking fee.

Although a hotel offers you calling a cab, the cab company will charge you a booking fee (about ¥200).

If the cab uses a high-way, (in Japan, no freeway) you have to pay for it.

Usually, the driver asks you if you need to use a high-way. It rarely happens except you are in a hurry or going for a long distance.

If you have an internet connection, you can use apps to call, so you don’t have to worry about a language barrier.

You really don’t have to worry about catching a cab in Japan.

In Japan, Uber is called “Uber Taxi” because taxi companies are operated as Uber so they are licensed cab drivers, not private drivers. (it is very safe.)

If you use a cab without apps, make sure you have cash just in case.

Also, make a note or screenshot of your destination information in Japanese.

Do not open and close a door by yourself.

Remember you will be charged an extra during the late night and early morning, and also when you call the cab (even via apps). 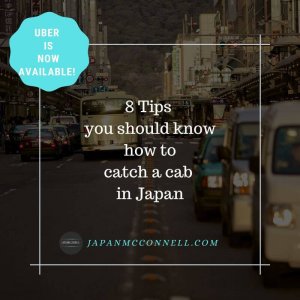 How to get the cutest prepaid transportation card in Tokyo