The native guide; All about unique Japan6 Foods you should try in Nagoya, Japan
Sponsored Link

In particular, “Nagoya Meshi” became known nationwide at “Aichi Earth Expo” held in 2005 in Nagoya City. Although the expo was over, Nagoya meshi is still drawing attention today.

Aichi prefecture is famous for the local red miso, which has a rich and strong salty flavor so that “Nagoya Meshi” has additional complex flavor; “a rich, tangy, salty and sweet”.

It is true that Osaka is called “the Nation’s kitchen”, however, Nagoya also has the most unique own food-culture in Japan. 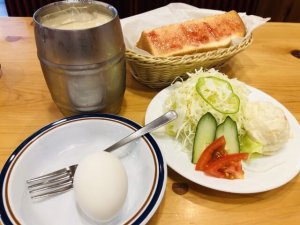 “Morning set” (モーニングセット)means “breakfast set ” at Kissa-ten, Japanese traditional coffee shop, cafe, tearoom, which is complimentary food when you order a drink during the service in the morning.

In my opinion, the very simple complimentary foods ( like a thin-sliced or half-thick butter toast and one boiled egg )tend to be served in cityside such as Nagoya,

on the other hand, variety of food set ( sometimes the dish doesn’t much with coffee) tends to be served suburb of Nagoya and other countryside cities.

It is very fun for Japanese people to visit different Kiss-ten to try their signature “morning set” every weekend with family or friends.

For retires, and housewives, the “morning set” time is chatting time with their friends weekdays.

The culture of “morning set” had been very popular especially in the Chubu ( Central ) area, ( Aichi, Gifu, Mie ), then Kissa-ten in other regions started the same service but they mostly charge additional fees for the “morning set”.

“Komeda coffee” (コメダ珈琲)is the most famous Nagoya style Kissa-ten (coffee shop) outside of Cyubu areas, which has contributed to spreading out ‘morning set” service throughout Japan. 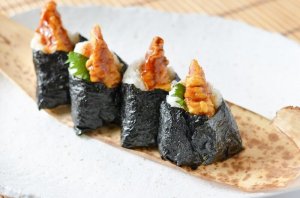 “Ten-musu”(天むす) is a rice ball stuffed with a tempura shrimp, and mostly you can find the “Nagoya” area.

It is usually sold as to-go food.

“Musubi, Onigiri ” … A rice ball, Japanese traditional comfort food. “musu” of “ten-musu” is just the abbreviate word, possibly it is used only for “ten-musu”.

however, the original ten-musu started in Tsu city, Mie. (The prefecture next to Aichi prefecture ) around 1957.

The female owner of the tempura restaurant “Senjyu”, combined a tempura shrimp ( the main dish) and a rice ball (the side dish ) together for her “busy-bee” husband who didn’t have enough time to eat lunch. “Ten-musu” became popular among regular customers and they began to sell it as their special food.

In the 1980s, the apprentice opened a branch shop in Osu, Nagoya, and “ten-musu” became famous as Nagoya Meshi all over Japan, more than the original resultant in Mie.

It is a smaller rice ball than regular rice ball and the flavor is sweet and soy-saucy taste. 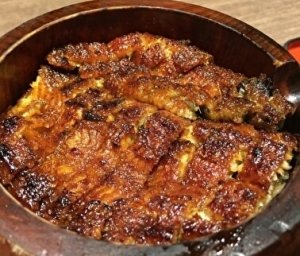 Do not be scared to taste eel if you are in Japan,

and “Hitsu mabushi” (ひつまぶし) is a very popular challenging food for foreign tourists and most of them fall in love with its taste.

“Hitsumabushi” can be in the top 3 of “Nagoya Meshi” for Japanese people.

The dish that “eel” on the rice called “Una jyu”, “Unadon” is a very popular dish in Japan, but “Hitsumabushi” in “Nagoya-style Una jyu”.

“Una jyu” and “Una don”… Both dishes are the same ingredients, grilled butterflied eel glazed with a rich and sweet soy sauce on rice. The big difference is serving style. “Una jyu” is served with “Jyu bako” which is the special decorative lacquer container. “Una don” is served with a china bowl. Therefore, “Una jyu” is more expensive than “Una don” . “Una” is an abbreviate word of “Unagi” which means “eel” in Japanese. “Jyu” means “jyu bako” as I mention, and “don” is an abbreviate of “donburi” maeas a bowl.

“Mabushi”…In this term, mixing with rice. “Mabu-su” is the verb.

The most unique feature is there is a rule of how to eat “Hitsu mabushi”.

Therefore you have to be patient for the waiting time to be seated at any branches. (Main, Jingu-branch, the branch in Matsuzakaya department store.)

The booking system has changed recently, you can’t book the table for lunch or just Hitusmabushi dish. Only kaiseki dinner cuisine is accepted to book.
Main and Jingu-branch
The waiting time can be up to an hour or more, however, you can put your name on the list in advance at the entrance, and the staff will give you the seating time, then you can go visit the Atsuta Shrine, where is very famous shrine near the restaurant, until the given time. Listing time starts 10:30 a.m. *You have to take your shoes off at these restaurants.
Matsuzaka-ya branch
The branch restaurant is in Matsuzaka-ya, the department store. The restaurant opens at 11 a.m. but the department store opens at 10:00 a.m. so you can get in the line at the front of the restaurant. There is no list to put your name, the staff comes to ask how many people in your group while you are in the line. You can walk away from the line when you leave one person in the line, however, you can’t get the table if someone is missing at your tarn. 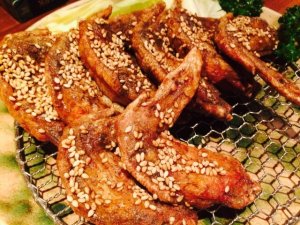 “Tebasaki”(手羽先) or “Tebasaki no Karaage” (手羽先の唐揚げ) is the yummy deep-fried chicken wings dish.

There are two kinds of styles for Japanese deep-fried chicken wings dishes,

one is the simple salt and spicy black pepper flavor,

another one is the Nagoya style, which is coated with sweet soy sauce and sesame seeds.

The Nagoya-style tebasaki is crispy outside, juicy inside with utterly addictive spicy, peppery, sweet, and soy-saucy glaze.

It is the popular “Izaka-ya” (Japanese pub-restaurant) menu, you can’t stop drinking chilled beer because of strong flavor.

Here is the tip on how to eat “Tebasaki” easily.

It might be interesting to compare each tebasaki while you are in Nagoya. 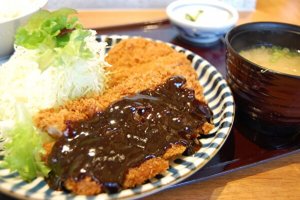 “Miso Katsu” (味噌カツ) is the pork cutlet with thick Miso-based sauce instead of Tonkatsu sauce, which is the essential dish for people in Nagoya.

This unique sauce is based on “Hacho Miso“, and each restaurant has its own secret recipe for it.

People in the Chubu region, Aichi, Gifu, and Mie prefectures, loves “Hatcyo miso” flavor so that especially people in the Nagoya area add the miso in anything such as “Miso cutlet”, “Miso nikomi udon“, “Miso soup” and even sweets!

Do you want to make Nagoya style Miso sauce at home???

Here is my recipe.

“Yaba ton”(矢場とん) is the countrywide (even one in Thailand ) restaurant for “Miso Katsu”.

The pork cutlet is not thick, not thin, and HUGE! (called “Waraji-katu”)

The miso sauce is not thick, and almost looks dipped in the sauce.

Once you bite piece, the additional rich flavor is filled your mouth.

“Ogura toast”(小倉トースト)…my favorite combination for the piece of thick Syokupantoast which is “Ogara” and “butter”, “sweet” and “salty”. Very Yummy.

“An ( Anko)”…Sweet red bean (azuki bean) paste. To make “An (Anko)”paste, boil (simmer) red beans gently and sweeten them. “Koshi-An” is the completely get rod of skins, mashed and strained red beans paste, on the other hand, “Tsubu an”is the unmashed and chunky red beans paste.

“Ogura”…The official name is “Ogura-an”, which is the type of “An (Anko)”. “Ogura An” is the mix of “Koshian” and boiled high-grade red beans (Daiangon azuki) with sugar syrup.

“Syokupan”…A Japanese syokupan bread is usually white and much fluffier than bread overseas.

“Ogura toast” is invented in the Kissa-ten (not excited anymore ) in Nagoya long time ago, and has still been loved especially in the Chubu region.

You can get “Ogura toast” in most of Kissa-ten ( Japanese coffee shop) or sometimes there is an additional option ‘”Ogura-an” during “morning set” service time.

You can see three different types of “Ogura toast” if you hop Kissa-ten around in Nagoya.

Kissaten in Nagoya for Ogura-toast

“Konparu” (コンパル) is the one of popular coffee and sandwich shop for a long time in Nagoya. Actually, the signature menu is the “Breaded fried shrimp sandwich”, however, “Ogura toast” is also very popular.

“Kissa Riyon” is also the iconic coffee shop in Nagoya for a long time, where is famous the complimentary service for a whole day.

Even though Nagoya is a compact city, there are many unique local foods you can’t count, and these are still very popular among Japanese people.

In other words, people visit Nagoya to eat “Nagoya-meshi” as an attraction.

Nagoya is actually very easy to access from east and west because of the city located in the central of Japan.

If you are planning to purchase “Japan Rail Pass“, you just get off Nagoya station on the way to Tokyo, or Kyoto and Osaka.

japanmcconnell.com
Is Nagoya Worth Visiting? It Is Not Too Late To Decide After Reading This Site
It's very true that Nagoya can be overlooked by tourists. Unfortunately, Nagoya itself can't attract international visitors who visit Japan for the first time. But Nagoya can be worth to stay if you are arriving at Nagoya Centrair Int'l Airport or holding Japan Rail Pass. Nagoya is the center of transportation networks in the central region and also is located between Tokyo and Osaka on the Golden route. Moreover, the central region of Japan has lots of attractive things to see. So Nagoya can be the base for your Japan trip.

Things you must know about how dangerous Heatstroke in Japan