The native guide; All about unique Japan google.com, pub-5441866818918003, DIRECT, f08c47fec0942fa0 How 5 Free Apps Save Your Life In The Events Of Natural Disaster In Japan; Download Before Traveling To Japan | Japanmcconnell
Sponsored Link

Most visitors from overseas are likely concerned about the major earthquake and tsunami in Japan, however, there are also other severe natural disasters in Japan.

Due to torrential rains and sudden downpours, flash floods and landslides often cause tremendous damage in recent years.

Japan experience quite many typhoons during typhoon season, few major typhoons blow everything away, collapse trees and overflowing the river.

A very little possibility but some volcanoes are still considered potentially active around in Japan.

It was not a friendly system to get emergency warnings and alerts for non-speaking Japanese people a few years ago.
As the number of international residents and visitors increasing, Japanse government and organizations moved to improve safety networks.

Today, I am going to tell you 4 FREE disaster alert apps and the translation app to download before traveling to Japan. 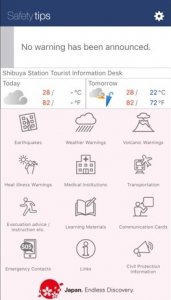 “Safety tips”, the official free app is developed by the Japan Tourism Agency for foreign tourists.

This app alerts you in the events of natural disasters such as Typhoons, earthquakes, tsunamis, volcanos, torrential rains, floods, and also heatstroke warnings, and other emergency situations include missile attack in Japan.

Also, it provides helpful information that you need in case of an emergency.

“Disaster Preparedness Tokyo app” is the official app by the Tokyo Metropolitan Government.

Waring alerts will be sent when an emergency event occurs in Tokyo, in addition, it is a useful app to learn emergency and disaster preparedness in Japan.

The major feature of this app is that there many quizzes to learn how to save your life in several hazard situations, especially earthquakes with “kawaii” (cute) cartoon characters.

It is good for learning emergency and disaster preparedness with kids before traveling to Japan.

However, In my opinion, it has some difficulties for foreigners to use the app as a disaster alert because not all sections are somehow available in other languages.

The most ridiculous part is the first page to set “your language”, which says “Please select your language” in Japanese. 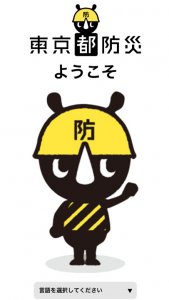 Yet, this may be a very useful app as a guide in case of an emergency disaster in Japan.

NHK is Japan’s national broadcasting organization, and “NHK World” is the program that provides the latest news in English.

Most Japanese people switch the TV channel to NHK from others in the event of natural disasters to collect accurate information about disasters.

“NHK World TV” app is streaming TV, which provides not only daily news but also warning alerts via the “Push Notification”.

You can get all kinds of tourism information on this App, and also it provides disaster alerts and a shelter map in your area.

“Voice Tra” is the translation App developed by the National Institute of Information and Communications Technology (NICT), it is an accurate translation, clear pronunciation, easy to use.

It will be useful to communicate with local people or other tourists in any situation.

Download 5 free apps and check functions out how to use them. Learn emergency and disaster preparedness before traveling to Japan.

In order to use apps, especially to get emergency warnings and alerts, consider purchasing a SIM card or changing your cell phone plan that you can connect stable internet in Japan. 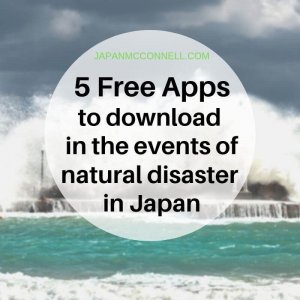 What You Should Wear For Hokkaido In Winter, Japan