Osaka, the largest city in the west of Japan and the most friendly (or funny) people live in.

It is one of my favorite cities.

There are so many things to do and eat, honestly, 2 days is not enough to spend time in Osaka.

Of course, you have limit time and want to visit other sightseeing spots in Japan, right?

I am going to tell you 2 days itinerary mixed common and deep tourist spots in Osaka.

Check the business hours of each facility in advance due to COVID-19. 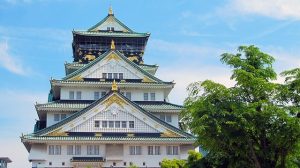 There are many sightseeing spots in Osaka, but “Osaka Castle”(大阪城) is a place where you can feel historical Japan, and you can walk while enjoying the seasonal scenery of “Osaka Castle Park” (大阪城公園 ) on the way to the castle.

It takes around 20 min walking to get to the castle tower from near public transportation stations below.

How To Get By Overground or Metro Lines

There are 4 overground and underground train lines to get to “Osaka castle park” aka “Osaka Jo Koen” “Osaka Jo park”.

The most popular line is taking Osaka Metro (Chuo Line or Nagahori Tsurumi Ryokuchi Line), but you can also take the JR Loop Line and Keihan Line.

Let’s walk across the iconic main bridge toward Osaka castle tower, which is called “Gokuraku-Bashi” (極楽橋) has rebuilt as the second time in 1965.

Gokuraku means “heaven” in Buddhist terms, the name of “heaven bridge” is said routed from the original building which was the main Buddhist temple before Osaka castle built.

The original wooden bridge was destroyed twice due to the samurai wars, and the bridge was rebuilt once, and then the current shape in 1965.

The current castle tower is the third generation that was rebuilt in November 1994 by the donation of citizens.

The inside is used as the museum, and historical materials on Osaka Castle and Shogun-Hideyoshi Toyotomi, as well as a diorama of Osaka Castle, are displayed. 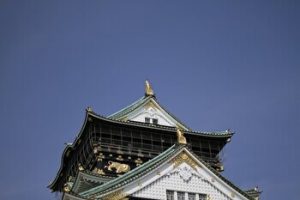 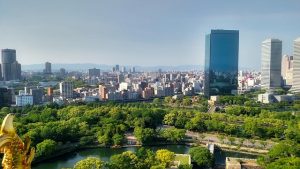 From the observation on the 8th floor, you can see the city of Osaka.

Tips! If you have Osaka amazing Pass, the admission fee for the observatory is free. For the castle tower, children aged under 15 years old are free! 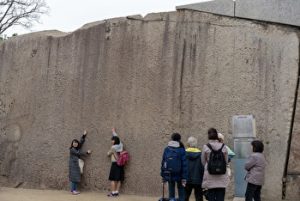 In the main castle gate, “Sakuramon Gate” (桜門), there is an iconic photo spot with a huge stone called “Tako Ishi”.

“Tako Ishi” (蛸石) made with rocks cut from the islands of the Seto Inland Sea protects the castle tower. The largest cut-rock in among the rocks of the wall is 5 meters-high, 11meters-wide, and weighs approximately 108 tons.

After enjoying the iconic Osaka castle and seasonal flower in the park, walk toward your proffered station.

If you want to take the JR Osaka Loop Line (clockwise), go to Morinomiya station. By JR line, you can go to the next destination directly and can be the fastest way.

As the name suggests, the JR Osaka Loop Line runs on the loop line in Osaka city. Don’t make a mistake in the direction. Get on the clockwise train toward “Tsuruhashi” station.

By Osaka Metro, change to Sennichimae Line (Pink) at Tanimachi 9-chome (S18) and get off Tsuruhashi station (S19).

As soon as you get on the ground at Tsuruhashi station, you can smell the oriental lively aroma.

The district in Tsuruhashi and Ikuno is one of the largest populations of Korean residents in Japan, so an atmosphere makes you feel in the other country, Korea.

Take a walk through the “Tsuruhashi Wholesale Market”, which is the deep spot in Osaka. 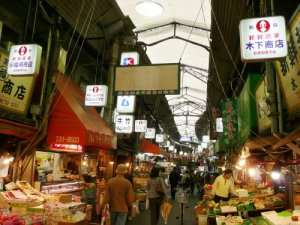 Directly connected from the station, there is an entrance to Osaka Tsuruhashi Market (大阪鶴橋市場) where is already creating a mysterious atmosphere.

“Osaka Tsuruhashi Market” is contained with 3 districts, with more than 800 shops in 6 markets, and it is said to have originated from a black market, which was a naturally-occurring gathering of street vendors after the war.

Walking into small alleys makes you traveling in Korea, there are hundreds of Korean grocery stores and Korean barbecue restaurants, as well as a kimchi specialty store that sells a variety of kimchi that you can’t see anywhere else. 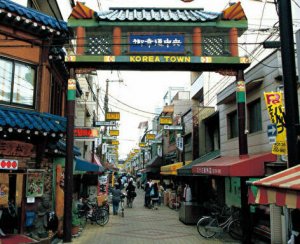 If you get a little tired of exotic aroma in the old and narrow market, walk toward the “Miyuki street”, Koreatown in Ikuno Ward, Osaka.

On the other hand of the fascinating narrow arcade shopping street of Osaka Tsuruhashi Market, Miyuki street is the open-sir shopping street with more modern looks, and hundreds of stores sell Korean products and foods. 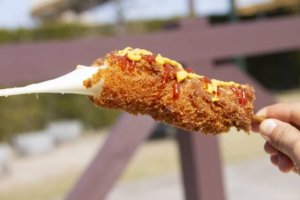 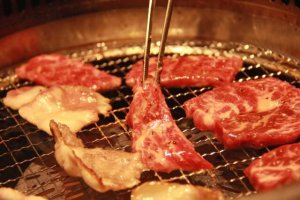 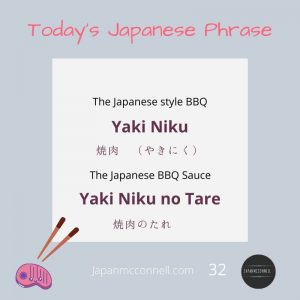 The grill is built or settles in the center of the table, and grill thin slices of meat by yourself.

Yakiniku is almost the national food in Japan, it is one of the Japanese cuisines you must try during staying in Japan.

Tsuruhashi aka “Mecca of Yakiniku” in Japan, there are many BBQ restaurants competing sales in the area. It is said that “You can’t see through the area well due to the grilling smoke”.

Today, there are many modern-style Yakiniku restaurants (have a built-in well-ventilation fan each grill) throughout Japan, so you don’t have to worry about grilling smoke and smoky smell, but lots restaurants in the Tsuruhashi area have been business for long- old-fashioned. 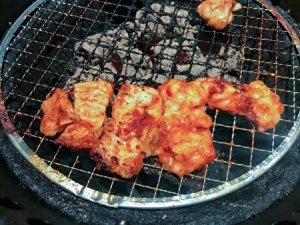 Therefore, plan what to wear for the day you are going to eat Yakiniku at especially nostalgic Yakiniku restaurants.

Some restaurants offer free or charged goggles, a raincoat, a shower cap, a plastic bag for putting belongings.

I understand girls! If you don’t want to get smokey, go to the modern style Yakiniku restaurant!

Best Yakiniku Around Tsuruhashi! 10 Popular Yakiniku Restaurants
Known as Japan's biggest Koreatown, Tsuruhashi is also popular as a hotspot for delicious eateries. It is particularly famous for yakiniku (grilled meat), with ...

Dipping with the signature homemade BBQ sauce is a Japanese BBQ style, here is my BBQ sauce recipe. 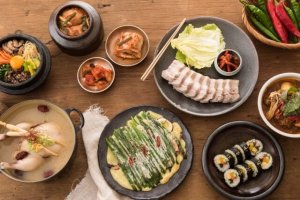 Because of the Korean resident population in this town, you can find many Korean comfort food restaurants. 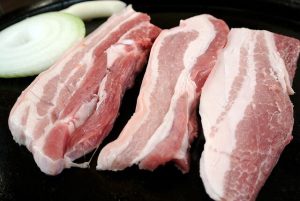 When you go to a Korean style BBQ restaurant, Samgyeopsal (grilled pork belly) is a must-eat! 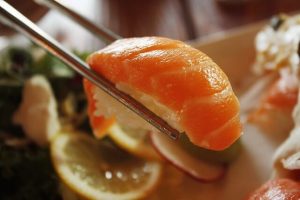 Proceeding to Osaka Tsuruhashi Market maze deeply, you will get a fresh food market area.

You will see a tiny sushi place that has an only counter while you are walking around, and
it is a hidden spot where you can eat delicious Sushi.
Even market workers stop by eating fresh sushi after their work done in the morning.

After satisfying your hunger, head to “Shinsekai” where is a popular sightseeing spot.

*It depends on the time table, you may have to change a train at Tennoji (天王寺) when taking the JR loop line. 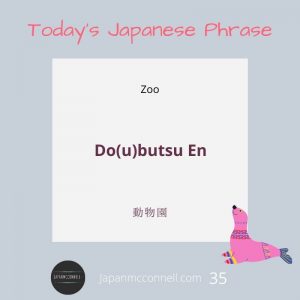