The native guide; All about unique JapanDriving in Japan; How To Stay Safe In The 11 Things You Should Know About
Home
Travel Tips
Sponsored Link

Especially, to see around local areas such as Okinawa, Hokkaido, Tohoku (Northern) regions, Western regions far than Hiroshima, public transportations don’t cover around all around, or you may wait for them for a long time.

Renting a car is the one option to make your itinerary efficiently.

The accidents that occurred by foreign tourists are missing “STOP” sign, driving on the wrong side, entering the wrong side on a one-way street and miss-parking in the tiny parking space.

Not only in Japan but also there are different traffic rules in each county once you drive in a different country.

Therefore, you must know about the traffic rules in Japan if you are planning to drive a car. 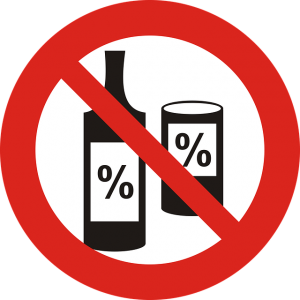 If you are a driver, you are not allowed to have any amount of alcohol in Japan.

Don’t even think about drinking and driving in Japan.

Driving under any amount of alcohol is strictly prohibited.

Although you are not a driver, these can break laws…

you are on the same ride with the driver who has alcohol,  you will be also imposed a penalty too.

Drive On The Left Side Of Road 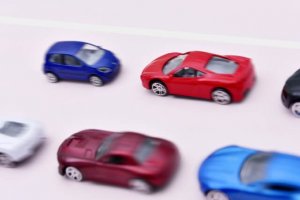 The wrong side for you?

In Japan, You MUST DRIVE ON THE LEFT SIDE of the road.

Be gentle on Narrow roads 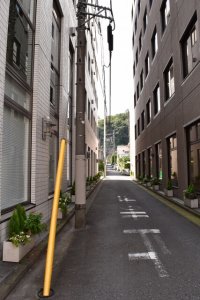 There are many narrow roads without center lines but still both ways in Japan.

You have to slow down and be ready for oncoming traffic.

Some places have a shoulder for pulling a car over for oncoming traffic, just be nice to other drivers and give them the way if you see them. Sometimes you have to back up and it is not fun.

“Drive a car close to the center of the road because local drivers ( especially elder ) often stop their car beyond the stop line on the side road, or badly they don’t pat attention other cars and tend to proceed. “

Passengers on the back seat are required wearing seat belts on.

Children under the age of 6 must be restrained in a child safety seat in the vehicle.

You can rent a child safety seat at rent-a-companies with an extra fee in Japan.

Must be over 18 years old

In Japanese law, you must be over 18 years old to drive a vehicle.

Your requirements to drive a car in Japan

Please carefully check your requirements to drive in Japan in your countries before you leave.

According to the U.S. Embassy and Consulates in Japan,

“Americans cannot drive in Japan with only a U.S. driver’s license. Persons found driving in Japan without a legal license are subject to fines, arrest, and possible deportation.”

American short-term visitors who drive in Japan need “international driving permits” issued in the United States by the American Automobile Association (AAA) or the American Automobile Touring Alliance.
You need an International Driver’s Permit issued by your countries or an official Japanese translation of your driver’s license if you are from Belgium, Estonia, France, Germany, Monaco, Slovenia, Switzerland, and Taiwan.

Do not forget to keep your local driver’s license and passport all the time you drive in Japan.

Again! Please check the requirements to drive a car in Japan yourself. You will need to take full responsibility for your action! 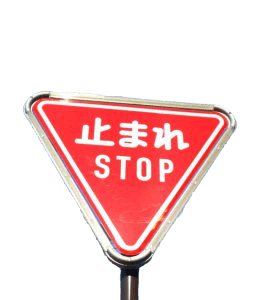 In fact, a major car accident caused by overseas drivers is related to the “Stop” sign in Japan because

The old “Stop” (止まれ) sign is written in Japanese only, some drivers ignored the sign because they couldn’t read.

In Hokkaido, a Taiwanese tourist caused a collision accident at an intersection with a truck because he couldn’t read the “止まれ” (stop) sign. There were a total of seven passengers in the car, and his wife had a seriously injured, and other family members had injured too. -Yomiuri News, 12/24/2019 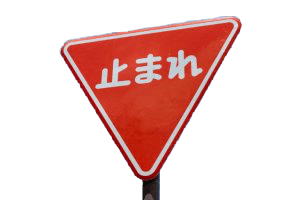 You have to STOP when you see this stop sign of course.

Do not get confused with the STOP sign in Japan and the Yield sign in your country.

Watch Out Pedestrians And Cyclists

There are many pedestrians and cyclists anywhere in Japan.

There are lots of risks that you will not expect, so drive carefully if you see pedestrians and cyclists.

Surprisingly or not, 6 – 12 years old students go to school by walk themselves.

Generally, they make a line in a small group but sometimes they have to walk on the streets without sidewalks. 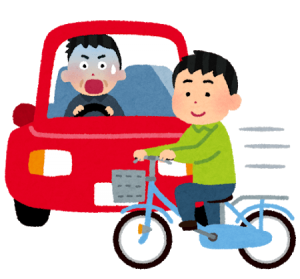 Many Junior-high and high school students are riding bicycles wearing earbuds to listen to music,

blocking the road to chat with their friends,

or sometimes making a turn without looking back.

Workers walk or ride bicycles to train stations nearby.

Most pedestrians and cyclists have good manners and follow rules, but unfortunately not all. 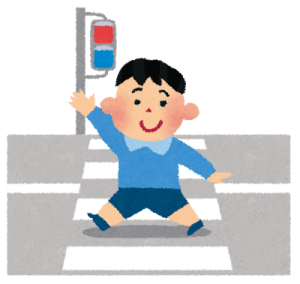 Be careful with those who are crossing when the light for pedestrians blinking, when you are going to make a turn at the intersection.

In Japanese law, a driver will be sentenced more serious penalty than a non-driver although he/she doesn’t have 100% fault.

Prepare To stop On Yellow Light

Japanese drivers are GENERALLY polite and not aggressive drivers, (NOT ALL drivers) at yellow lights, they slow down and stop.

For them, the yellow light does not mean “speed up and make the light”.

Even though you think you can make the light, the car in front of you will be slow down to stop.

Pay attention to the car in front, prepare to stop at the yellow light. 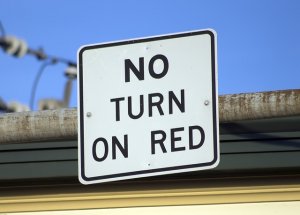 For Americans and Canadians, it is ILLEGAL to do a “(left) turn on red” rule in Japan.

You are not allowed to make a left turn on red even the way is clear. 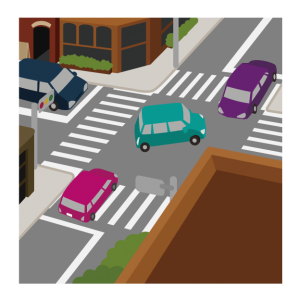 There is no 4-way stop rule in Japan, so a car going straight always have right of the way.

It is not in order of arriving at the intersection.

If you want to make a right turn, and a vehicle goes straight or makes a left turn, oncoming traffic has the right of way.

*The priority road is generally the road have a center line or a median strip,
wider road, or have a sign says “the priority

Must Stop Before Railroad Crossing 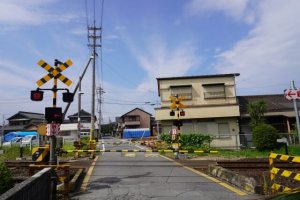 The law. You must stop before entering the railroad crossing although the gate is opened, in other words, although trains are not coming.

A police officer often is hidden and watches whether drivers stop or not around the railroad crossing.

Watch Out In the Parking

Most Japanese drivers usually park their cars with backing-up in a parking area.

you might proceed and will cause bumping each other.

Especially in the countrysides, local older people often don’t look back before parking, you should be careful in parking places.

You should always pay attention when you see a car trying to park.

Talking On A Cell Phone

You are not allowed to hold a cell phone to talk, text, and operate applications while you drive a car

Talking via speaker, Bluetooth speaker and earbuds (not a headset), are not officially breaking a law, but some cities punish them with their own ordinances.

So you better not talk on a cell phone while driving in Japan, and pull and stop a car if needed to touch cell phone.

When you drive a car, it does not matter where you are,

you must know traffic rules and drive safely.

Here is the site to learn about the driving rule in Japan. 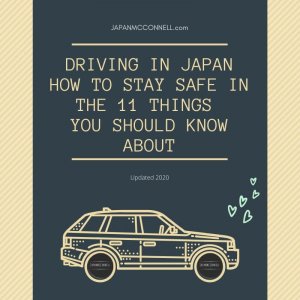 Do you really need a car?

Driving a car is not worth itIf you plan to visit major cities in Japan such as Tokyo, Yokohama, Nagoya, Osaka, Kyoto, Kobe, Hiroshima, Fukuoka and so on.

There are a lot of bothering to drive a vehicle in such big cities.

Also, the cost of a rental car does not cheap so does gas.

Public transportations, buses, subways, and trains, are developed in such big cities.

I like using subways and trains because they are fast, cheap, on time, and cover all over the cities.

Once you get a prepaid transportation card,

it’s very easy to travel around.

Travel around the main island?

Experiences of Japanese high technology transportation will be good memories of your Japan trip.

Foodies! Don’t Miss These Staple Osaka Food From The Nation’s Kitchen; With Little Bit Trivia From The Japanese Guide

How To Make Japanese Style Lemon Sour At Home
The Ultimate Guide Of Japanese Wood Cutting board; How to Maintenance
Best Japanese Bath Salts You Should Buy For Your Luxury Time
Best Low-Carb Beers You Can Drink On The Keto Diet During Traveling In Japan
Black And White Sesame seeds; Health benefits, How to use in Japanese Cooking
The Japanese calligraphy and Kakizome; Things you want to know
The Japanese Canned Chu-Hi Guide; Chu-Hi Kudasai!
5 Things You Should Know About Hinoki Cypress; Relationship with Japanese Life And Awesome Benefits
Homemade Authentic Japanese Teriyaki (Yakitori) Sauce; For Yakitori, Grilled Meat and Vegetables
Japan Is The Mayonnaise Wonderland; Kewpie, Ajinomoto, And More!